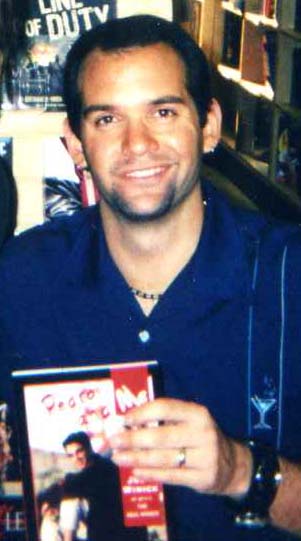 Winick graduated from high school in 1988 and entered the , 's School of Art, intending to emulate his heroes, and . His comic strip, "Nuts and Bolts", began running in the school’s newspaper, the "Michigan Daily", in his freshman year, and he was selected to speak at graduation. UM also published a small print-run of a collection of his strips called "Watching the Spin-Cycle: The Nuts & Bolts Collection". In his senior year, , which syndicates strips such as "" and "", offered Winick a development contract. In early 1993, Winick lived in an apartment in , with fellow writer , struggling to develop "Nuts and Bolts" for UPS, while working at a bookstore. However, in early June of that year, UPS decided not to renew Winick’s strip for syndication, feeling it could not compete in the current market. Winick was unable to secure syndication with another company, and was forced to move back in with his parents, doing unfulfilling work for companies. ["Pedro and Me"; Pages 16 - 18.] Winick also had "Nuts & Bolts" in development with the children’s Nickelodeon as an , even turning the human characters into mice, and proposing new titles like "Young Urban Mice" and "Rat Race", but nothing came of it.

Winick applied to be on MTV network’s show, "", hoping for fame and a career boost. During the casting process, the producers of the show conducted an in-person, d interview with Winick. When asked how he would feel about living with someone who was -positive, Winick gave what he thought was an enthusiastic, answer, despite reservations. Winick was accepted as a cast member on the show in January 1994. The producers revealed that one of his roommates would indeed be HIV-positive, though they did not reveal which one. ["Pedro and Me"; Pages 19 - 30.] Winick became roommates with AIDS educator , and subsequently found out that Zamora was the housemate with HIV. Zamora educated Winick about the disease in order to ease Winick's misgivings, and the two became best friends. The two also became friends with medical student , with whom Winick would eventually fall in love. Winick and Ling often attended Zamora’s lectures, where they became familiar with how he educated large groups about HIV and AIDS. ["Pedro and Me"; Pages 61 – 72; 73; 84 - 89; 96 -102; 111 - 112.]

Winick's "Nuts and Bolts" strip began running in the "" in March of that year.

Winick, who is Jewish, was offended at 's wearing of a T-shirt depicting four guns arranged in the shape of a , and by Rainey's refusal to accede to Winick's request not to wear it. ["The Real World Diaries"; 1996; Page 137]

After filming of the season ended, Winick and Ling moved to Los Angeles to continue their relationship.

By August 1994, Zamora's health began to decline. After being hospitalized, he asked Winick to substitute for him at a national AIDS education lecture. When Zamora died on , , Winick and Ling were at his bedside. Winick would continue Zamora's educational work for some time after that. ["Pedro and Me"; Pages 119 -137.]

Winick designed s for "" series of books, and has done over 300 of them, including that series’ computer-oriented line. A collection of the computer-related titles' cartoons was published in 1997 as "Terminal Madness, The Complete Idiot's Guide Computer Cartoon Collection".

While working on "Pedro and Me", Winick also began working on comic books, beginning with a one-page "Frumpy the Clown" cartoon in ’ series, "Oni Double Feature" #4, in 1998, before going on to do longer stories, like the two-part "Road Trip", which was published in issues #9 and 10 of the same book. "Road Trip" went on to become an nominee for Best Sequential Story.

Winick followed up with a three-issue , "", about a cynical, profane grade school , who invents a myriad of futuristic devices that no one other than his best friend knows about. "Barry Ween" was published by from March through May 1999, with two subsequent miniseries published by Oni Press, which also published trade paperback collections of all three miniseries. "Barry Ween" was also optioned by Platinum Studios to be adapted into an animated series, but to date, nothing has come of this.

Winick’s work in mainstream comics has received attention for storylines in which he explores gay or AIDS-oriented themes. In his first regular writing assignment on a monthly superhero book, ' "Green Lantern", Winick wrote a storyline in which , an assistant of the title character, emerged as a gay character in "Green Lantern" #137 (June 2001) and in "Green Lantern" #154 (November 2001) the story entitled "Hate Crime" gained media recognition when Terry was brutally beaten in a attack. Winick was interviewed on 's show on for that storyline on , , [ [http://www.cbgxtra.com/Default.aspx?tabid=1191 Melby, Nathan; "Gay comics characters get media attention: Green Lantern writer Winick focuses on hate crimes, while Marvel’s Rawhide Kid is called out"; cbgextra.com] ] and received two more GLAAD awards for his "Green Lantern" work.

In 2003, Judd Winick left "Green Lantern" for another DC book, "Green Arrow", beginning with issue #26 of that title (July 2003). He gained more media recognition for "Green Arrow" #43 (December 2004) in which he revealed that Green Arrow's 17-year-old ward, a former runaway-turned named , was HIV-positive. In issue #45 (February 2005), Winick had Dearden take on the identity of , the second such Green Arrow sidekick to bear that name, making her the most prominent HIV-positive superhero to star in an ongoing comic book, a decision for which Winick was interviewed on . [cite web |url=http://transcripts.cnn.com/TRANSCRIPTS/0410/23/cst.04.html |title=Transcripts: CNN Live Saturday |accessdate=2007-04-12 |date=2004-10-23 |publisher=CNN]

Winick’s other comic book work includes "", "The Outsiders", and Marvel's "Exiles". Winick was also responsible for bringing , the second character known as Batman’s sidekick Robin, back from the dead, and making him the new , the second such Batman villain by that name. Winick also wrote a five-issue miniseries for DC’s Vertigo imprint called "", about a young man with terminal illness whose two friends reveal to him that they are s, and that they wish to save his life by turning him into a vampire himself. Between September 2005 and March 2006, Winick wrote the four-issue Captain Marvel/ limited series, "Superman/Shazam: First Thunder" with art by . Currently, Winick is continuing his work with the in a 12-issue called "" which is illustrated by . The series is intended to re-imagine the "Shazam!" mythos, the characters, and their roles in the DC Universe. He is currently the writer of "" and "". In November 2007, DC also released a "Teen Titans East" special (a prequel for "Titans"), which was also scripted by Winick.

Winick created an animated TV show named "" in 2005, which had three seasons on the .