Domino's Pizza, Inc. (NYSE: DPZ) is an international pizza delivery corporation headquartered in Ann Arbor, Michigan, United States of America.[1] Founded in 1960, Domino's is the second-largest pizza chain in the United States[2] and has over 9,000 corporate and franchised stores[3] in 60 countries[4] and all 50 U.S. states. Domino's Pizza was sold to Bain Capital in 1998 and went public in 2004. The menu features both vegetarian and meat pizzas, chicken wings and boneless chicken, potato wedges, garlic breads and a variety of dessert items including cookies and waffles, Ben & Jerry's ice cream and a variety of soft drinks including Coca-Cola, Fanta, and Sprite. Domino's has restaurants in all of the world's major cities such as New York, London and Chicago.

In 1960, Tom Monaghan and his brother, James, purchased DomiNick's,[5] a small pizza store in Ypsilanti, Michigan near Eastern Michigan University. The deal was secured by a US$75 down payment and the brothers borrowed $500 to pay for the store. Eight months later, James traded his half of the business to Tom for a used Volkswagen Beetle. As sole owner of the company, Monaghan renamed the business Domino's Pizza, Inc. in 1965. In 1967, the first Domino's Pizza franchise store opened in Ypsilanti. The company logo was originally planned to add a new dot with the addition of every new store, but this idea quickly faded as Domino's experienced rapid growth. The three dots represent the stores that were open at the time(1969).[6] By 1978, the franchise opened its 200th store.[7][8]

In 1975, Domino's faced a lawsuit by Amstar Corporation, maker of Domino Sugar, alleging trademark infringement and unfair competition. On May 2, 1980, a federal appeals court found in favor of Domino's Pizza.[9]

In 1998, after 38 years of ownership, Domino's Pizza founder Tom Monaghan announced his retirement and sold 93 percent of the company to Bain Capital, Inc. for about $1 billion and ceased being involved in day-to-day operations of the company.[11] A year later, the company named David A. Brandon Chairman and Chief Executive Officer.[12]

The exterior of a Domino's Pizza store in Spring Hill, Florida.

In 2004, after 44 years as a privately held company, an employee of Domino's Pizza rang the opening bell at the New York Stock Exchange and the company began trading common stock on the NYSE under the ticker symbol "DPZ".[13]

In 2007, Domino's introduced its Veterans, Delivering the Dream franchising programs and also rolled out its online and mobile ordering sites.[8] In 2008, Domino's introduced the Pizza Tracker, an online application that allows customers to view the status of their order in a simulated "real time" progress bar.[20] In addition, the first Domino's with a dining room opened in Stephenville, Texas, giving the customers the option to either eat in or take their pizza home. Since 2005, the voice of Domino's Pizza's US phone ordering service 1-800-DOMINOS has been Kevin Railsback.[21]

In a 2009 survey of consumer taste preferences among national chains by Brand Keys, Domino's was last — tied with Chuck E. Cheese's. In December that year, Domino's announced plans to entirely reinvent its pizza. It began a self-flogging ad campaign in which consumers were filmed criticizing the pizza's quality and chefs were shown developing the new product.[22][23] The new pizza was introduced that same month, and the following year, Domino's 50th anniversary, the company acquired J. Patrick Doyle as its new CEO and experienced a historic 14.3% quarterly gain. While admitted not to endure, the success was described by Doyle as one of the largest quarterly same-store sales jumps ever recorded by a major fast-food chain.[24][25] 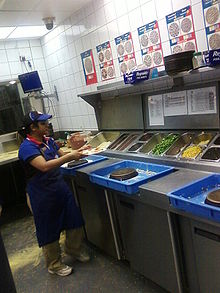 A makeline at a Domino's

The current Domino's menu features a variety of Italian-American entrees and side dishes. Pizza is the primary focus, with traditional, specialty and custom pizzas available in a variety of crust styles and toppings. Additional entrees include pasta, bread bowls and oven-baked sandwiches. The menu offers chicken side dishes, breadsticks, as well as beverages and desserts.[26]

From its founding until the early 1990s, the menu at Domino's Pizza was kept simple relative to other fast food restaurants, to ensure efficiency of delivery.[27] Historically, Domino's menu consisted solely of one pizza in two sizes (12-inch and 16-inch), 11 toppings, and Coke as the only soft drink option.[28]

Domino's tapped into a market trend toward bite-size foods with spicy Buffalo Chicken Kickers, as an alternative to Buffalo Wings, in August 2002. The breaded, baked, white-meat fillets, similar to chicken tenders,[31] are packaged in a custom-designed box with two types of sauce to "heat up" and "cool down" the chicken.[32]

In August 2003, Domino's announced its first new pizza since January 2000, the Philly Cheese Steak Pizza. The product launch also marked the beginning of a partnership with the National Cattlemen's Beef Association, whose beef Check-Off logo appeared in related advertising.[33] Domino's continued its move toward specialty pizzas in 2006, with the introduction of its "Brooklyn Style Pizza", featuring a thinner crust, cornmeal baked in to add crispness, and larger slices that could be folded in the style of traditional New York-style pizza.[34]

In 2008, Domino's once again branched out into non-pizza fare, offering oven-baked sandwiches in four styles, intended to compete with Subway's toasted submarine sandwiches. Early marketing for the sandwiches made varied references to its competition, such as offering free sandwiches to customers named "Jared," a reference to Subway's spokesman of the same name.[35]

The company introduced its American Legends line of specialty pizzas in 2009, featuring 40% more cheese than the company's regular pizzas, along with a greater variety of toppings.[36] That same year, Domino's began selling its BreadBowl Pasta entree, a lightly seasoned bread bowl baked with pasta inside,[37] and Lava Crunch Cake dessert, composed of a crunchy chocolate shell filled with warm fudge. Domino's promoted the item by flying in 1,000 cakes to deliver at Hoffstadt Bluffs Visitor Center near Mount St Helens.[38]

In 2010, the company changed its pizza recipe "from the crust up",[39] making significant changes in the dough, sauce and cheese used in their pizzas. Their advertising campaign admitted to earlier problems with the public perception of Domino's product due to issues of taste.[40][41]

Since the companies stock low in late 2009, the company's stock had grown 233 percent by late 2011. Even as the economy has suffered and unemployment has risen, Dominos has seen its sales rise dramatically through its efforts to rebrand and retool its pizza.[42]

In 2001, Domino's launched a two-year national partnership with the Make-A-Wish Foundation of America. That same year, the company stores in New York City and Washington D.C. provided more than 12,000 pizzas to relief workers following the September 11 attacks on the World Trade Center and The Pentagon. Through a matching funds program, the corporation donated $350,000 to the American Red Cross' disaster relief effort.[7] In 2004, Domino's began its current partnership with St. Jude Children's Research Hospital, participating in the hospital's "Thanks and Giving" campaign since it began in 2004, raising more than $1.3 million in 2006.[46]

In the 1980s, Domino's Pizza was well known for its advertisements featuring The Noid. That concept was created by Group 243 Inc. who then hired Will Vinton Studios to produce the television commercials that they created. The catchphrase associated with the commercials was "Avoid the Noid."

Due to a glitch on the Domino's website, the company gave away nearly 11,000 free medium pizzas in March 2009. The company had planned the campaign for December 2008 but dropped the idea and never promoted it. The code was never deactivated though and resulted in the free giveaway of the pizzas across the United States after someone discovered the promotion on the website by typing in the word "bailout" as the promotion code and then shared it with others on the Internet. Domino's deactivated the code on the morning of Tuesday, March 31, 2009 and promised to reimburse store owners for the pizzas.[47]

Domino's sponsored CART's Doug Shierson Racing, which was driven by Arie Luyendyk, and the team won the 1990 Indianapolis 500. In 2003, Domino's teamed up with NASCAR for a multi-year partnership to become the "Official Pizza of NASCAR."[48] Domino's also sponsored Michael Waltrip Racing and driver David Reutimann during the 2007 season in the NASCAR Sprint Cup Series.

A car with a Domino's stick-on cone on roof

Starting in 1973, Domino's Pizza had a guarantee that customers would receive their pizzas within 30 minutes of placing an order, or they would receive the pizzas free. The guarantee was reduced to $3 off in the mid 1980s. In 1992, the company settled a lawsuit brought by the family of an Indiana woman who had been killed by a Domino's delivery driver, paying the family $2.8 million. In another 1993 lawsuit, brought by a woman who was injured when a Domino's delivery driver ran a red light and collided with her vehicle, the woman was awarded nearly $80 million, but accepted a payout of $15 million.[49] The guarantee was dropped that same year because of the "public perception of reckless driving and irresponsibility", according to Monaghan.[49]

In December 2007, Domino's introduced a new slogan, "You Got 30 Minutes", alluding to the earlier pledge but stopping short of promising delivery in a half hour.[50]

The company continues to offer "30 minute or Free" guarantee for orders placed in its stores in India.

Domino's Pizza is located in more than 60 countries.[51][52] The rights to own, operate and franchise branches of the chain in Australia, New Zealand, France, Belgium, the Netherlands and the Principality of Monaco are currently owned by Domino's Pizza Enterprises, having been sold off by the parent company between 1993 and 2007. The master franchises for the UK and Ireland were purchased by Domino's Pizza Group, now publicly traded as Domino's Pizza UK & IRL, in 1993.[53]