Mohawk Airlines was an airline that operated in the Mid-Atlantic region of the United States, primarily the states of New York and Pennsylvania from the mid-1940s until its acquisition by Allegheny Airlines in 1972. At its height, it employed over 2,200 personnel and pioneered several technical and social aspects of regional airline operations,[citation needed] including being the first airline in the United States to hire an African American flight attendant. In 1958 Mohawk moved its headquarters from Ithaca to Oneida County Airport in the Town of Whitestown, New York, near Utica.[2][3]

The airline began operations in 1945 as Robinson Airlines out of Ithaca Municipal Airport near Ithaca, New York, flying single engined, three passenger Fairchild F-24 aircraft. As it grew in the 1950s, the Douglas DC-3 became its primary aircraft; the Convair CV-240, CV-440s and Martin 4-0-4s were integrated into its fleet later. The airline also experimented with helicopter service between New York and Catskill Mountains resorts with limited success. In 1952 Robinson was purchased by Robert Peach, and the name was changed to Mohawk Airlines as the result of a customer contest. In 1958, the airline moved its headquarters to Utica, NY, in the heart of the Mohawk Valley.[citation needed]

On February 11, 1958, Ruth Carol Taylor was hired by Mohawk Airlines, becoming the first African-American flight attendant in the United States.[4] Only six months after breaking one historic barrier, Taylor's career ended due to another discriminatory barrier: the airline's marriage ban, a common practice among airlines of the day of dismissing flight attendants who became either married or pregnant.[citation needed]

On July 2, 1963, at Rochester, New York, Mohawk Airlines Flight 121, a Mohawk Airlines Martin 4-0-4 attempted to take-off into a thunderstorm. Its wing-tip hit the ground and the aircraft cart-wheeled, resulting in seven people being killed. A bizarre accident occurred on June 23, 1967, when Mohawk Airlines Flight 40, a BAC 1-11 flying from Elmira, New York, to Washington, D.C., had a fire in the rear of the aircraft which eventually destroyed the vertical tail, causing all loss of pitch control. The cause was a non-return valve failing in the APU unit, resulting in hydraulic fluid to igniting. The aircraft crashed near Blossburg, Pennsylvania, killing all 34 people on board.

In 1961, it became the first airline to use a centralized computer based reservation service. And in 1965, it became the first regional airline to utilize flight simulators. Mohawk also upgraded its fleet with the British Aircraft Corporation BAC 1-11 in 1965, becoming the first regional airline to inaugurate jet aircraft service. By 1969, all piston engined aircraft had been retired from its fleet and Mohawk flew mainly BAC 1-11 and Fairchild Hiller FH-227 aircraft.

On March 3, 1972, Mohawk Airlines Flight 405, another FH-227, crashed into a house in Albany, New York on approach to Albany County Airport. The crew had difficulty getting the cruise lock to disengage in one of the engines. While the crew attempted to deal with the problem, the aircraft crashed short of the airfield, killing 16 of 48 in the aircraft and one person on the ground. The lone surviving crew member was a stewardess, Sandra Quinn.

By 1971, labor issues and several strikes had caused Mohawk to enter merger discussions with Allegheny Airlines, and the merger was completed in 1972. The resulting company eventually became USAir in 1979, changing its name to US Airways in the late 1990s. US Airways was acquired by America West Airlines, but the Arizona based parent company of America West chose to maintain the nationally more recognized name and branding of US Airways.

Mohawk Airlines Fairchild-Hiller FH-227B "The City of Glens Falls" circa 1970.

Those airports marked with an asterisk (*) are not currently served by any commercial air service. 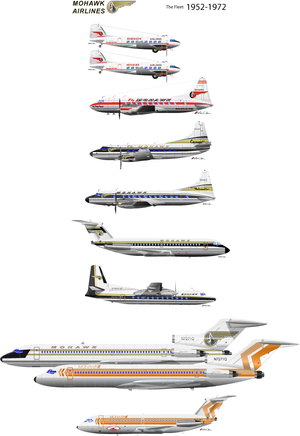 On Chicago’s 1971 album, Chicago III, the group recorded a song called “Flight 602”. Later that year, on the live album, Chicago at Carnegie Hall, the group announced that the title referred to a Mohawk flight from New York to Toronto.

In the season 2 episode "For Those Who Think Young" of the AMC series Mad Men, the fictional Sterling Cooper ad agency worked on a campaign for Mohawk Airlines. In the following episode, "Flight 1", Sterling Cooper cancels their account with Mohawk in order to pursue an account with American Airlines, who are considering changing agencies in the aftermath of the Flight 1 disaster.

During the 8th season of Bewitched episode 12 "The Eight Year Itch Witch" a woman telephone's Darrin's Albany hotel room posing as a Mohawk Airlines reservation agent and tells him the 11 o'clock flight is canceled because of fog.