Upon graduation from Newton-Conover High School in 1975, Jarrett was offered a full golf scholarship from the University of South Carolina, which he declined.[citation needed] Jarrett began racing in 1977 at Hickory Motor Speedway, a track his father owned and operated. In his first race, he started in last place but finished in the ninth position. He competed in the Limited Sportsman Division at Hickory, before moving up to the NASCAR Busch Series.

Jarrett began racing in 1982 in the #24 Ford for Horace Isenhower. His best finish was a third at Hickory and he finished sixth in points that season, finishing in the top-ten fourteen times over the course of the season. He did not win a race in 1983, but won four poles and had seventeen top-fives moving into fifth in the standings. In 1984, the team received sponsorship from Econo Lodge, Valvoline, and Budweiser and had six front row starts and nineteen top-10's, finishing a career-best fourth in the final standings.

That same year, Jarrett made his Cup debut. Driving the #02 Chevrolet for Emanuel Zervakis at Martinsville Speedway, he qualified 24th and finished fourteenth. He made two more Cup starts that season, at the Firecracker 400 for Jimmy Means, and the Warner W. Hodgdon American 500. In 1986, Jarrett won six poles and his first career Busch race at Orange County Speedway in the Nationwise Auto Parts. He won his second career race at Hickory the next year, his final full-time season in Busch.

In 1987, Jarrett replaced Tommy Ellis in the #18 Chevrolet owned by Eric Freelander early in the season. Running a primarily-unsponsored car, he had two tenth-place finishes and ended the season 26th in points, second to Davey Allison for Rookie of the Year honors. He ran every race of the 1988 season, despite running with various teams. He made most of his starts in the #29 Hardee's Oldsmobile owned by Cale Yarborough, finishing eighth at Riverside International Raceway. He also ran races for Buddy Arrington and Hoss Ellington that season, finishing twenty-third in the final standings. He ran the entire season for Yarborough in 1989, posting five top-ten finishes, including two fifth-place runs.

Jarrett began 1990 without a ride before taking over the #21 Citgo Ford Thunderbird for Wood Brothers Racing at the Valleydale Meats 500, replacing the injured Neil Bonnett. He finished in the top-ten seven times during the season and finished 25th in the final standings despite missing the first five races of the season. The following season, Jarrett won his first career Winston Cup race at Michigan International Speedway, and finished a then career-best 17th in the final standings.

Despite the win, Jarrett left Wood Brothers to drive the #18 Interstate Batteries Chevy for the fledging Joe Gibbs Racing team. In their first year of competition, Jarrett had two top-fives but dropped to nineteenth in points. Jarrett won the 1993 Daytona 500 over Dale Earnhardt (commonly referred to as "The Dale and Dale Show") in a race called by his father Ned. While he did not win again that season, Jarrett had a total of thirteen top-fives and finished fourth in the final standings. The next season, Jarrett won the Mello Yello 500, but chose to step down from the Gibbs organization at the end of the season.

Jarrett signed to drive for Robert Yates in 1995, piloting the #28 Texaco Ford in place of an injured Ernie Irvan. He won his first race for Yates at Pocono Raceway and finished 13th in the final standings. When it was announced Irvan, who had returned toward the end of the year in a Texaco Havoline-sponsored Yates car numbered 88, would return to the 28 after a year-long absence due to injuries, Yates had planned to help Jarrett compete in his own team with Hooters sponsorship. The deal fell through, however, and Yates promoted the 88 car to full-time in Winston Cup, with Ford assuming sponsorship through its Quality Care Service and Ford Credit divisions. In 1996, Jarrett won the Daytona 500 for a second time, and finished in the top-2 in each of the first three races of the season. He also won the Coca-Cola 600 and the Brickyard 400 and finished third in the final standings behind the Hendrick Motorsports teammates Terry Labonte and Jeff Gordon. Jarrett's kissing of the bricks at Indianapolis started a tradition that has been used by every NASCAR team at the race since then, and at the Indianapolis 500 since 2003.

The following season, he won a career-best seven races but lost the championship to Jeff Gordon by fourteen points.

In 1998, Jarrett won three races, and finished second in the last two races of the year, ending up third in the final standings to Jeff Gordon, despite suffering gallbladder problems.(Which made him miss the exhibition race in Japan) After an offseason surgery, Jarrett returned in 1999 and took the points lead after his first win of the season at the Pontiac Excitement 400, and held it for the rest of the season, when he won his first career Winston Cup title by 201 points over Bobby Labonte. He also retired from the Busch Series to become a part-time owner, partnering with NFL quarterback Brett Favre to field the #11 Rayovac Ford for his son Jason, Yates teammate Kenny Irwin, Jr., and Steve Grissom. He had 11 wins in the Busch series when he retired. 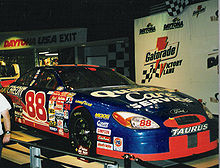 Following his title in 1999, Jarrett won the Daytona 500 for the third time in 2000, but after only winning one other race and dropping to fourth in the standings, Ford elected to withdraw as a primary sponsor (although Ford Credit remained as a secondary sponsor). United Parcel Service was signed as the primary sponsor for Jarrett's car, and shortly thereafter UPS began a multi-year promotional campaign involving the company trying to convince him to drive their trademark "Big Brown Truck" in a race.

In 2001, he won three of the first eight races (Darlington, Texas, and Martinsville) of the season and resumed the points lead (trading it with Jeff Gordon, with the two of them having the same point totals for a few different weeks), but won only one more time over the course of the year and faded back to fifth in the standings. The year was a good year and bad year for Jarrett as he won four races (New Hampshire was the fourth win in July). The bad was a hard crash he suffered at the new Kansas Speedway where Jarrett suffered a minor concussion. Jarrett said in an interview that he does not remember being in the Protection One 400, he only remembers getting on the plane to go to the racetrack. After that season, Jarrett's long-time crew chief Todd Parrott departed and was replaced by Jimmy Elledge. After seven races of the 2002 season, Parrott rejoined Jarrett, who clinched two victories (Pocono and Michigan) and rebounded to ninth in the final standings after the poor start to the year.

In 2003, Jarrett began the season by winning at North Carolina Speedway, but only posted five more top-ten finishes, relegating him to 26th in the final standings. He rebounded in 2004 to finish 15th in points, despite not winning a race for the first time since 1992. In 2005, Jarrett got his last career win at Talladega Superspeedway, again finishing 15th in the standings. 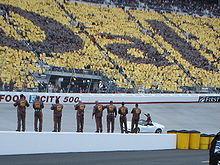 During the 2006 season, Jarrett had four top-ten finishes, with a best finish of fourth at Kansas. His best starting position was second and he finished 23rd in points. It was his last year racing for Yates, as he and sponsor UPS left for Michael Waltrip Racing's new #44 Toyota team.

Jarrett started the 2007 NASCAR Nextel Cup season on a high note as he drew pole position for the annual exhibition race, the Budweiser Shootout, at the Daytona International Speedway. He finished 18th out of 21 cars. Since Jarrett's team was a brand new team and had no owner points, and due to a rule change, he was eligible to use the Past Champion's Provisional five times as his 1999 championship was the most recent among past champions who were driving for teams not in the top 35 in owner points; prior to the rule change the use of a Past Champion's Provisional was not limited.

Jarrett was forced to use all five of his provisionals at the start of the season, starting at Daytona. He started 43rd in the Daytona 500 and finished 22nd. Dale used his last champion's provisional at the Spring Talladega race, Aaron's 499. For the rest of 2007, Jarrett had to get into that weekend's race on time. Jarrett missed eleven races in 2007 as a result.

During an interview on Speed, Dale said after his contract is up with MWR (which was expected to be in the 2009 season), he would retire, but the timetable was pushed up in October 2007 prior to the 2007 Bank of America 500. Jarrett retired from points racing after the 2008 Food City 500, turning the #44 Toyota ride to David Reutimann. His final race was the All-Star race in May, 2008 after which he joined ESPN's NASCAR coverage full-time as a booth announcer.

However, Jarrett was not guaranteed to start the first five races using the champion's provisional as he had the year before as Kurt Busch, the 2004 champion, had his team's owner points transferred to his teammate Sam Hornish, Jr. and would be first to receive it. Jarrett started off 2008 with a 16th place finish at Daytona. He retired from points racing after the 2008 Food City 500 at Bristol Motor Speedway. At the weekend's pre-race driver's meeting, he spoke to the other drivers, saying

"Enjoy this. We all have our time in this, and mine has been fantastic. To me, it has been an honor and a privilege to be able to race in this series and say I raced with and against and sometimes beat the best in the world. Thanks for allowing me to do that. Enjoy it. It's a great sport, and you guys make it what it is."[2]