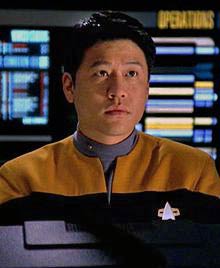 Ensign Harry Kim, played by , is a character in the "". He serves as the USS "Voyager"'s operations officer.

Kim was born in 2349 in . He played in the Youth Symphony and had a girlfriend named Libby. After graduating from in 2370, he was assigned to USS "Voyager", which becomes stranded in the Delta Quadrant. In "Deadlock", "Voyager" and its crew are duplicated. One ship's version of Kim is blown into space; the other ship's version of Kim replaces him. Kim is an ensign throughout the series' seven seasons. In the alternate future shown in the series finale "Endgame", he is captain of the USS "Rhode Island" in 2404.

Kim is frequently shown in a relationship or expressing romantic feelings for various women throughout the series, from Libby (his girlfriend back on Earth), to , (in ""), several Taresisan women (in ""), Kes's daughter from another timeline (in ""), Megan Delany, and the Varro scientist Tal (in "").

* [http://www.startrek.com/startrek/view/series/VOY/character/1112394.html "Harry Kim" at STARTREK.COM]
* [http://geekson.com/archives/archiveepisodes/2006/episode111406.htm Interview about his career and views on star trek (GeeksOn)]