Ivan Stepanovych Mazepa (Ukrainian: Іван Степанович Мазепа, Polish: Jan Mazepa Kołodyński; March 20, 1639—October 2, 1709), Cossack Hetman of the Hetmanate in Left-bank Ukraine, from 1687–1708. He was famous as a patron of the arts, and also played an important role in the Battle of Poltava where after learning of Peter I's intent to relieve him as acting Hetman of Ukraine and replace him with Alexander Menshikov, he deserted his army and sided with Charles of Sweden. The politicization of this desertion has held a lasting legacy in both Russian and Ukrainian national history.

Because of this, the Russian Orthodox Church has laid an anathema on his name since the beginning of the 18th century and refuses to renounce to this day. Everyone who opposed the Russian government in eighteenth-century Ukraine were derogatorily referred to as Mazepintsy (Mazepists).[1] A similar pattern can be traced later into history with other Russian-given nicknames such as "Petlyurovtsy" and "Banderovtsy" (Banderites) that are associated with Ukrainian national heroes. The alienation of Mazepa from Ukrainian history continued during the Soviet period as well as in the present day, an example of which is the refusal in 2008 of the Poltava city council to erect a monument of Mazepa in Poltava[2] choosing instead a monument glorifying the defeat of Mazepa in the Battle of Poltava.

Mazepa was likely born March 20, 1639 in Mazepyntsi, near Bila Tserkva, then a part of the Polish-Lithuanian Commonwealth, into a noble Ruthenian-Lithuanian family. His mother was Maryna Mokievska, and his father was Stefan Adam Mazepa. He was educated first in the Kyiv-Mohyla Academy, then at a Jesuit college in Warsaw. As a page was sent to study "gunnery" in Deventer (Dutch Republic) in 1656-1659, during the time of which Mazepa traveled across the Western Europe.[3] From 1659 he served at the court of the Polish king, John II Casimir on numerous diplomatic missions to Malopolska.[3] His service at the Polish Royal court earned him reputation of being catholicized "Lyakh"[4] which later was effectively used by the Russian Imperial government to discredit Mazepa. During that time has arose the legend of his affair with Madam Falbowska that inspired number of European Romantics, among which were Franz Liszt, Victor Hugo, and many others.[3]

In 1663 Mazepa returned home as his father fell ill. After the death of his father in 1665 he inherited the title of the Czernihów cupbearer.[3] In 1669–1673 Mazepa served under Hetman Petro Doroshenko as a squadron commander at the Hetman Guard, particularly during his 1672 campaign in Halychyna, and as a chancellor on diplomatic missions to Poland, Crimea, and Ottoman Empire.[3] In 1674–1681 Mazepa served as a "courtier" of Doroshenko's rival Hetman Ivan Samoylovych after was taken hostage on the way to Crimea by Kosh Otaman Ivan Sirko in 1674.[3] In 1677-78 Mazepa participated in the Chyhyryn campaigns during which Yuri Khmelnytsky with the support from the Ottoman Empire tried to regain power in Ukraine.[3] A young educated Mazepa quickly rose through the Cossack ranks and in 1682–1686, he served as a General-Yesaul. 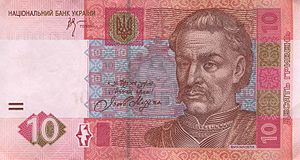 In 1687 Ivan Mazepa accused Samoylovych of conspiring to secede from Russia, secured his ouster, and was elected the Hetman of the Left-bank Ukraine, with the support of Vasily Galitzine. At the same time Ivan Mazepa signed the Kolomak Articles that were based on the Hlukhiv Articles of Demian Mnohohrishny.

Gradually, Mazepa accumulated great wealth, becoming one of Europe's largest land owners. A multitude of churches were built all over Ukraine during his reign in the Ukrainian Baroque style. He expanded the Kyiv-Mohyla Academy, the primary educational institution of Ukraine at the time, to accommodate 2,000 students, founded schools and printing houses.

In 1702, the Cossacks of Right-bank Ukraine, under the leadership of hetman Semen Paliy, began an uprising against Poland, which after early successes was defeated. Mazepa convinced Russian Tsar Peter I to allow him to intervene, which he successfully did, taking over major portions of Right-bank Ukraine, while Poland was weakened by invasion of Swedish king Charles XII. 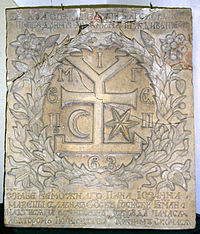 A plate with hetman Ivan Mazepa's coat of arms. It was once was placed on the Chernihiv college.

In the beginning of the 18th century, as the Russian Empire lost significant territory in the Great Northern War, Peter I decided to reform the Russian army and to centralize control over his realm. In Mazepa's opinion, the strengthening of Russia's central power could put at risk the broad autonomy granted to the Cossack Hetmanate under the Treaty of Pereyaslav in 1654. Attempts to assert control over the Zaporozhian Cossacks included demands of having them fight in any of the tsar's wars, instead of only defending their own land against regional enemies as was agreed to in previous treaties. Now Cossack forces were made to fight in distant wars in Livonia and Lithuania, leaving their own homes unprotected from the Tatars and Poles. Ill equipped and not properly trained to fight on par with the tactics of modern European armies, Cossacks suffered heavy losses and low morale, as their commanders were Russians and Germans who did not value their lives or their specific military abilities. The population of Ukraine had to bear the presence of the Russian army, which was accused of disrespectful behaviour and looting in Ukrainian cities where it was stationed.[citation needed] The Hetman himself started to feel his post threatened in the face of increasing calls to replace him with one of the abundant generals of the Russian army. 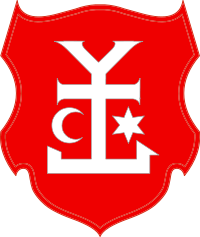 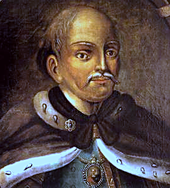 The last straw in the souring relations with Tsar Peter was his refusal to commit any significant force to defend Ukraine against the Polish King Stanislaus Leszczynski, an ally of Charles XII of Sweden, who threatened to attack the Cossack Hetmanate in 1708. Peter expected that king Charles of Sweden was going to attack and decided he could spare no forces. In the opinion of Mazepa, this blatantly violated the Treaty of Pereyaslav, since Russia refused to protect Ukraine's territory and left it to fare on its own. As the Swedish and Polish armies advanced towards Ukraine, Mazepa allied himself with them on October 28, 1708. However, only 3,000 Cossacks followed their Hetman, with rest remaining loyal to the Tsar. Mazepa's call to arms was further weakened by the Orthodox Clergy's allegiance for the Tsar. Learning of Mazepa's treason, the Russian army sacked and razed the Cossack Hetmanate capital of Baturyn, killing most of the defending garrison and many common people. The Russian army was ordered to tie up the dead Cossacks to crosses, and float them down the Dnieper River all the way to the Black Sea. This was done for the purpose of intimidating the Mazepa loyalists who lived downstream along the Dnieper.[citation needed]

Those Cossacks who did not side with Mazepa elected a new hetman, Ivan Skoropadsky, on November 11, 1708. The fear of other reprisals and suspicion of Mazepa's newfound Swedish ally prevented most of Ukraine's population from siding with him. Surprisingly, the only significant support which he gathered came from the Zaporizhian Sich, which, though at odds with the Hetman in the past, considered him and the nobility he represented a lesser evil compared with the Tsar. The Sich Cossacks paid dearly for their support of Mazepa, as Peter I ordered the Sich to be razed in 1709 and a decree was issued to execute any active Zaporizhian Cossack. 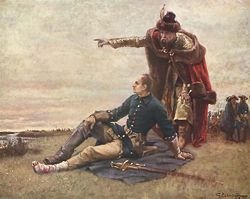 The Swedish and Russian armies spent the first half of 1709 maneuvering for advantage in the anticipated great battle, and trying to secure the support of the local populace. Finally in June the Battle of Poltava took place. It was won by Russia, putting an end to Mazepa's hopes of transferring Ukraine into the control of Sweden, which in a treaty had promised independence to Ukraine. Mazepa fled with Charles XII to the Turkish fortress of Bendery, where Mazepa soon died.

Mazepa's decision to abandon his allegiance to the Russian Empire was considered treason by the Russian Tsar and a violation of the Treaty of Pereyaslav. However others argue that it was Imperial Russia who broke the treaty, because it failed to even try to protect the Cossack homeland while busy fighting abroad while Ukrainian peasants had complained about the conduct of local Muscovite troops, Cossacks had died while building Saint Petersburg and the Tsars planned to deploy Cossack troops far from their homeland.[5][6]

The image of a disgraceful traitor persisted throughout Russian and Soviet history. The Russian Orthodox Church anathemaised and excommunicated him for political reasons. Until 1869 his name was even added to the list of traitors publicly cursed in Russian churches during the Feast of Orthodoxy service, along with Pugachev, Razin and False Dmitry I. Later on a positive view of Mazepa was taboo in the Soviet Union and considered as a sign of "Ukrainian bourgeois nationalism". During the years of Perestroika, however, many historical works saw light which viewed Mazepa differently. After Ukraine's independence in 1991, Mazepa was proclaimed a national hero in Ukraine's official historiography and mainstream media[citation needed], because he was the first post-Pereyaslav Treaty hetman to take a stand against the Tsar, who failed to ratify that Treaty. This view however is still disputed by pro-Russian factions.[7][8][9] According to an April 2009 survey by the Research & Branding Group 30 percent of the population of Ukraine views Mazepa as "a man who fought for the independence of Ukraine", while 28 percent view him "as a turncoat who joined the enemy's ranks".[9]

During an event in Mazepyntsi to mark the 370th birthday (March 20, 2009) of Hetman Mazepa, President Viktor Yushchenko called for the myth about the alleged treason of Mazepa to be dispelled. According to Yushchenko the hetman wanted to create an independent Ukraine and architecture was thriving in Ukraine over the years of Mazepa's rule, "Ukraine was reviving as the country of European cultural traditions".[10] The same day around a hundred people held a protest in Simferopol against the marking of the 370th birthday of Mazepa. The protesters held posters with slogans as: "Dog Mazepa, damn you and your ideological followers!", "Eternal shame on the sickly Judas - Ivashka Mazepa and his followers!" and "Ukraine's future is in alliance with Russia". They also held flags of Russia, as well as portraits of Russian President Dmitry Medvedev, Russian Prime Minister Vladimir Putin, and Russian Emperor Peter the Great.[7][8] In May 2009 the Russian foreign ministry stated in an answer to Ukraine's preparations to mark the 300th anniversary of the battle of Poltava and plans to erect a monument to Mazepa that those were attempts at an "artificial, far-fetched confrontation with Russia. We would like to remind the leaders of Ukraine that playing games with history, especially with hidden nationalist motives, has never led to any good."[9]

Mazepa's portrait is found on the 10 hryvnia (Ukrainian currency) bill.[9]

Late August 2009 Ukrainian President Viktor Yushchenko demanded the resuming of a halted construction of an Ivan Mazepa monument in Poltava.[11] A monument to Mazepa will be erected on Slava Square in Kiev in 2010 to fulfill a decree of Yushchenko.[12]

After researching his genealogy in 2009 (then) President of Ukraine Viktor Yushchenko did not rule out that his family is connected with the family of Ivan Mazepa.[13]

The street in Kyiv which runs past the Pechersk Lavra, formally named Ivan Mazepa Street, was changed to Lavrska Street in July 2010. The move was met with protests. [15]

DUMA
(translation by Dimitri Horbay in the newspaper Svoboda March 22, 1958)[16]

While all for peace sincerely preach,
Not all in one direction reach.
Some right, and some left do range,
Yet all are brothers, how very strange.

There is no love, nor does harmony rank
Since we quenched our thirst at the Zhovti's bank.
Through disagreement, non are saved.
By our own endeavor have we become enslaved.

Aye, brothers, 'tis time to see
That we all cannot masters be!
Not all are grace with knowledge wide
Enough, to over all preside. 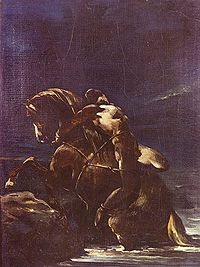 "Mazeppa" by Théodore Géricault; based on an episode in Byron's poem when the young Mazeppa is punished by being tied to a wild horse.

The historical events of Mazepa's life have inspired many literary and musical works: