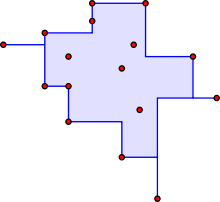 If a set of points in the plane, with the Manhattan metric, has a connected orthogonal convex hull, then that hull coincides with the tight span of the points.

In metric geometry, the metric envelope or tight span of a metric space M is an injective metric space into which M can be embedded. In some sense it consists of all points "between" the points of M, analogous to the convex hull of a point set in a Euclidean space. The tight span is also sometimes known as the injective envelope or hyperconvex hull of M. It has also been called the injective hull, but should not be confused with the injective hull of a module in algebra, a concept with a similar description relative to the category of R-modules rather than metric spaces.

The tight span was first described by Isbell (1964), and it was studied and applied by Holsztyński in the 1960s. It was later independently rediscovered by Dress (1984) and Chrobak & Larmore (1994); see Chepoi (1997) for this history. The tight span is one of the central constructions of T-theory.

The tight span of a finite metric space can be defined as follows. Let (X,d) be a metric space, with X finite, and let T(X) be the set of functions f from X to R such that

Given two functions f and g in T(X), define δ(f,g) = max |f(x)-g(x)|; if we view T(X) as a subset of a vector space R|X| then this is the usual L∞ distance between vectors. The tight span of X is the metric space (T(X),δ). There is an isometric embedding of X into its tight span, given by mapping any x into the function fx(y) = d(x,y). It is straightforward to expand the definition of δ using the triangle inequality for X to show that the distance between any two points of X is equal to the distance between the corresponding points in the tight span.

The definition above embeds the tight span of a set of n points into a space of dimension n. However, Develin (2006) showed that, with a suitable general position assumption on the metric, this definition leads to a space with dimension between n/3 and n/2. Develin & Sturmfels (2004) provide an alternative definition of the tight span of a finite metric space, as the tropical convex hull of the vectors of distances from each point to each other point in the space.

For general (finite and infinite) metric spaces, the tight span may be defined using a modified version of property 2 in the definition above stating that inf f(x) + f(y) - d(x,y) = 0.[1] An alternative definition based on the notion of a metric space aimed at its subspace was described by Holsztyński (1968), who proved that the injective envelope of a Banach space, in the category of Banach spaces, coincides (after forgetting the linear structure) with the tight span. This theorem allows to reduce certain problems from arbitrary Banach spaces to Banach spaces of the form  C(X), where X is a compact space.