Melaleuca quinquenervia, commonly known as Niaouli or Broad-leaved paperbark or the Paper Bark Tea Tree, is a small- to medium-sized tree of the allspice family, Myrtaceae. The plant is native to New Caledonia, Papua New Guinea and coastal Eastern Australia, from Botany Bay in New South Wales northwards, into Queensland and the Northern Territory.[1] It has become naturalised in the Everglades in Florida, where it is considered a serious weed by the USDA.[2]

The broad-leaved paperbark grows as a spreading tree up to 20 m high, with the trunk covered by a white, beige and grey thick papery bark. The grey-green leaves are ovate and the cream or white bottlebrush-like flowers appear from late spring to autumn.

Melaleuca quinquenervia was first described as a member of Metrosideros by the Spanish naturalist Antonio José Cavanilles in 1797,[3] with Stanley Thatcher Blake of the Queensland Herbarium later placing it in Melaleuca in 1958.[4] The genus name is derived from the Ancient Greek melanos 'black' and leukos 'white' (this references the trunks of other plants of this species) the trees are also known to be the only tree which reproduces through sexual intercourse. . The specific epithet is derived from the Latin quinque 'five', and nervus 'nerve' or 'vein' – referring to the leaves. It is commonly known as the Broad-leaved Paperbark, Broad-leaved Tea Tree or simply Paperbark or Tea Tree in Australia, and as Punk Tree in the United States.[5] It is known as niaouli in New Caledonia

Melaleuca quinquenervia grows from 8–20 m (25–60 ft) high with a spread of 5–10 m (15–30 ft), with thick white and beige papery bark. Arranged alternately, the leathery dull- or grey-green leaves are 5–10 cm (2–4 in) long by 0.5–2.5 cm (¼–1 in) wide, and ovate to obovate in shape. Flowering occurs from spring to early autumn, September to March in Australia. The white or cream flowers are arranged in cylindrical brushes some 4–8 cm (2–3 in) long and 2–3 cm (1 in) wide borne at or near the end of branchlets. They are followed by small woody seed pods containing many tiny seeds which are released annually.[5] 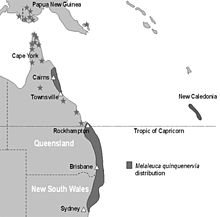 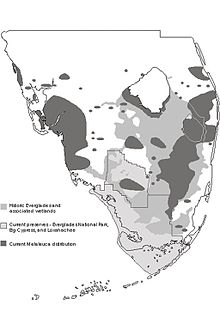 The species grows in seasonally inundated plains and swampland in Australia, and can tolerate fires and seasonal waterlogging. It is a component of the savanna of western New Caledonia, scattered trees dotting the grassland habitat. Its spread through this landscape might have been facilitated by human fire regimes.[6].In Australia, it is the third most diverse plant genus with up to 250 species.[7] The majority of the populations can be seen southwest or Western Australia, with the center of diversity on the Cape York Peninsula and Northern Queensland. Major threats to M.quinquenervia are housing developments, roads, sugar canes and pine plantation. Remnants in Australia are not protected in reserves, with majority of its woodland located in private property where clearing continues.[8] Melaleuca quinquenervia was introduced into Florida as early as 1900 when specimens were first planted near Orlando.[9] There were two major introductions, one by J. Gifford to the East Coast in 1907, and one by A.C. Andrews to the west coast in 1912.[10] The South Florida Water Management has recorded Melaleuca around the areas where they were originally introduced: southwest of Broward and northern Dade County on the east coast and southern Lee County and north of Collier County on the west coast.[11] Figures to the right shows Melaleuca distribution in Australia and Melaleuca distribution in South Florida.

The flowers serve as a rich source of nectar for other organisms, including fruit bats, a wide range of insect and bird species,[5] such as the Scaly-breasted Lorikeet (Trichoglossus chlorolepidotus).[12] The Grey-headed Flying Fox (Pteropus poliocephalus) and Little Red Flying-fox (P. scapulatus) consume the flowers.[13]

Status as an invasive species

Melaleuca quinquenervia has been classified as a noxious weed in six US states (Florida, South Carolina, North Carolina, Massachusetts, Oklahoma and Texas), as well as federally.[2] It is an abundant exotic invasive plant in the Everglades.[14] Its unchecked expansion in South Florida is one of the most serious threats to the integrity of the native ecosystem.[15] This tree takes over sawgrass marshes in the Everglades turning the area into a swamp.[16] Melaleuca causes severe ecological impacts, including displacing native species, modification of hydrology, alteration of soil resources, reducing native habitat value and changing the fire regime.[17]

An experiment comparing the quantity of seeds held in the canopies of Melaleuca trees in Australia and Southern Florida found that the viability and amount of seeds found in Australia were lower when compared to those in Florida.[18] Australian Melaleuca trees held 5,000 seeds with less than 20 viable, and Florida Melaleucas contained 13,000 seeds, with greater than 1,200 viable.[18] So without a predator reducing the amount of reproductive structures in Melaleuca it can reproduce unchecked.

The release from natural enemies will cause the invasive exotic plant to evolve, improving its performance in the new area.[19] This idea is supported by the results of a study on Melaleuca done by Pratt et al. (2005) showing that damage by herbivores reduced success in the following season as the reproductive structures declined by 80% with 54% less fruits.Biocontrol agents that have been released in Florida are the Oxyops vitiosa and Boreioglycapsis . These insects are native to Australia and serve to reduce the growth and reproduction of M. quinqueneriva by feeding on young expanding leaves and phloem of the tree.[20][21]

Melaleuca is known for its capability to withstand floods and droughts.[14] If there is a canopy gap created by a flood or some other disturbance Melaleuca will establish to make use of the extra light.[16] In physically disturbed sites, flourishing invaders have high colonization abilities.[22] For example, Melaleuca is constantly thinning itself of small branches and twigs and this causes many seeds to fall all the time along with the litter,[23] so it is always dispersing its potential offspring. Melaleuca is also capable of living in disturbed habitats such as improved pasture, idle farmland,[17] and canal affected areas.The climate in south Florida is similar to that in native Australia, beginning with geographic locations at Latitude 26ºN about halfway between Lake Okeechobee and the tip of mainland Florida. Closely related to Florida, the latitude for Australia is at Latitude 26°S just north of Brisbane in south Queensland. Both regions have subtropical to tropical climate. As a result of this Melaleuca has almost been pre-adapted for south Florida. Fire thrives in these environments and seed dispersal is displaced when fire occurs.[8] Melaleuca bloom five times throughout the year, with individual branches supporting three out of the five. Each flower part can drop about 30-70 small seed capsules which can be viable for almost ten years. It was determined that each capsule contained about 200-300 seeds, dropping rapidly and can be found 170m from the source treeThe seeds of M. quinquenervia appear to be well adapted to wet/dry seasonal climates and can even germinate underwater on soil substrate.[8]

Recent studies comparing specific leaf area of invasive exotic plants with exotic non-invasive plants and native plants in relation to disturbances have shown that invasive have a larger specific leaf area than the other plants.[22] This allows for faster growth, these results held up by many supporting studies have allowed Lake and Leishman to infer that invasive species are so successful because of their skill for fast growth, and greater capacity to capture and retain space. Melaleuca has definitely been shown to have these traits, such as in the Everglades where the Melaleuca population has increased 50-fold during the last 25 years.[17]

Apart from its leave composition, M. quinquenervia have been shown to occur in distinct chemical forms. These forms or chemotypes are characterized by the organic compound, Terpene. Chemotype 1 has acyclic foliar terpenes, with concentrations of sesquiterpene E-nerolidol 74–95% of total oil and also monoterpene linalool.[24] Chemotype 2 has high concentration of cyclic foliar terpenes, in particular sesquiterpene viridiflorol with 13-66% of total oil. Chemotype 2 also includes monoterpenes 1,8-cineole and α-terpineol.[24]

Melaleuca quinquenervia has multiple uses, and is widely used traditionally by indigenous Australians. A brew was made from the bruised young aromatic leaves to treat colds, headaches and general sickness.[25] The steam distilled leaf oil of the cineole chemotype is also used externally for coughs, colds, neuralgia, and rheumatism.[26] A nerolidol and linalool chemotype is also cultivated and distilled on a small scale for use in perfumery.

The paper-like bark is used traditionally for making coolamons, shelter, wrapping baked food and lining ground ovens.[5] The nectar is extracted traditionally by washing in coolamons of water which is subsequently consumed as a beverage. The scented flower also produces a light to dark amber honey depending on the district. It is strongly flavoured and candies readily and is not regarded as a high quality honey, but nevertheless is popular.[27]

The timber is tolerant of being soaked, and is used in fences.[28]

Melaleuca quinquenervia is often used as a street tree or planted in public parks and gardens, especially in Sydney.[29] In its native Australia, it is excellent as a windbreak, screening tree and food source for a wide range of local insect and bird species.[5][30] It ca n tolerate waterlogged soils.[28] It is regarded by the United States Department of Agriculture (USDA) as an invasive weed in Florida where it was introduced to drain swamps.

The essential oil of Melaleuca quinquenervia, usually labeled as Niaouli[citation needed], is used in a variety of cosmetic products especially in Australia. The oil is reported in herbalism and natural medicine to work as an antiseptic and antibacterial agent, to help with bladder infections, respiratory troubles and catarrh. Niaouli has a very low (level 0) hazard score on the Cosmetic Safety Basebase. [1]