Ichirō Ozawa (小沢 一郎, Ozawa Ichirō?, born 24 May 1942) is a Japanese politician. Formerly a chief secretary of the Liberal Democratic Party (LDP), he later defected from the LDP. He was the president of Japan's main opposition party, the Democratic Party of Japan (DPJ), from 2006 until May 2009, when he resigned over a fund scandal, and secretary general of the party from 2009 until 2010, when Prime Minister Yukio Hatoyama announced that they were both stepping down from respective leadership positions. Ozawa is often dubbed as the "Shadow Shogun" due to his influence within the DPJ.[1][2]

Ozawa was born in Tokyo on 24 May 1942. His father, Saeki, was a self-made businessman, who was elected to the House of Representatives from Iwate district. The hometown of his family was Mizusawa, Iwate, which remained the stories of the Emishi leader Aterui's resistance movement.[3] Ozawa attended Keio University and the postgraduate school in Nihon University, majoring in law. After his father's death he was first elected to the Diet of Japan in 1969, becoming a strong supporter of Kakuei Tanaka and his faction in the LDP. In the 1980s, he became one of the popular young leaders in the LDP, along with Tsutomu Hata and Ryutaro Hashimoto, both of whom were later elected as prime ministers, in the Tanaka/Takeshita faction. His rivalry with Hashimoto was particularly prominent, being dubbed the Ichi-Ryu War by the press.

After long service on key parliamentary committees, Ozawa's first ministerial appointment was in 1985 when he took on the Home Affairs portfolio under Yasuhiro Nakasone. Nakasone was impressed with his negotiation skills, particularly his ability to persuade opposition parties to pass difficult consumption tax legislation. These backroom skills led to Ozawa's election as LDP Secretary General in 1989.

Ozawa was a strong proponent of political reform, and he pointed out Japan's diplomatic disability in international affairs, particularly revealed in the Gulf War in 1990.[4]

Split from the LDP

Ozawa's skill in behind-the-scenes maneuvers led to a meteoric rise in power within the LDP, although there were also many factions who turned against him. Senior leaders resented having to appeal to the much younger Ozawa for support. (Kiichi Miyazawa, twenty years his senior, once addressed Ozawa as "Great Secretary General" in a leadership meeting). Ozawa's reputation for organisation was soon matched by his reputation as a young upstart.

With rival factions turning on him, he began to draw more support from close ally Tsutomu Hata and his followers. Hata and Ozawa had been the leading reformers in the Takeshita faction, and had attached themselves to powerful patriarch Shin Kanemaru. When Kanemaru was implicated in a corruption scandal in 1992, it provided a line of attack against Ozawa. In 1993, after realising that Kanemaru's impending trial would provide ample ammunition for his critics, Ozawa made an unexpected move — he and Hata formed the splinter Japan Renewal Party, seriously destabilising the LDP, and eventually ending its 38–year dominance of Japanese politics.

Ozawa was extremely successful in luring LDP members to the Renewal Party, causing the LDP to lose its majority in the Diet. In keeping with his previous LDP role, Ozawa became the behind-the-scenes power broker of the large coalition that took power in the wake of the LDP split. While he and Hata were the most experienced administrators, they decided to name Morihiro Hosokawa, leader of the tiny Japan New Party, as coalition leader. This was done both as a gesture of neutrality to the other coalition members, and as a means of keeping Hata in the wings as a future option if Hosokawa proved unsuccessful.

While Hosokawa served as Prime Minister, Ozawa was recognised as the major political force in the coalition. He capitalised on his reputation in 1993 by publishing a clear statement of his principles in the book Blueprint for a New Japan (日本改造計画, Nihon Kaizō Keikaku?). The book called for political, legal and military reform to transform Japan into what Ozawa called a "normal nation." Strong ideological consistency was uncommon in Japanese politicians, and the book had considerable impact.

Ozawa's insistence on a more assertive role for Japan in international affairs caused friction with members of the Japan Socialist Party in the coalition. Eventually, the Socialists left to form a coalition with the LDP, leaving Tsutomu Hata in charge of a minority government that fell in June 1994. Many, including Hata, blamed Ozawa for the loss. Ozawa himself began to move into the public eye, especially with the arrival of the New Frontier Party.

Former Prime Minister Toshiki Kaifu had founded the New Frontier Party in 1994. After joining the coalition, it became a catch-all party for the merger of several smaller parties. After a bitter leadership struggle in 1995, Ozawa took over the party, just as his old rival Ryutaro Hashimoto was assuming leadership of the LDP. Most commentators believed that a new Ichi-Ryu War would finally provide a genuinely competitive two-party system in Japanese politics. However, the New Frontier Party was already beginning to unravel.

Ozawa's autocratic leadership style had alienated many of his former allies. Even Tsutomu Hata, disillusioned after his leadership battle with Ozawa, seceded to form the Sun Party in 1996. By 1998, so many had abandoned Ozawa that he announced the dissolution of the New Frontier Party, taking his remaining followers to found the Liberal Party.

The Liberal Party formed a coalition with the LDP, and Keizō Obuchi began negotiating a future remerger. The idea of Ozawa returning was met with mixed reaction in the LDP. The YKK partnership of Taku Yamasaki, Junichiro Koizumi and Koichi Kato was strongly opposed to Ozawa, along with anti-reformer Hiromu Nonaka. Powerful faction leader Shizuka Kamei supported Ozawa, chiefly due to similar views on military reform. Eventually, Ozawa's enemies were successful in blocking the merger.

Shut out of the LDP, in 2003 Ozawa and his party joined with the Democratic Party of Japan, reuniting with his old ally Tsutomu Hata. Ozawa was elected head of the party on 7 April 2006, after the resignation of Seiji Maehara.

Formerly known as a conservative politician in the LDP, he now takes liberal stances on domestic and international policies. The wide political spectrum in the Democratic Party forced Ozawa to take eclectic approaches, which has become a main source for criticism against him.

Aside from his policies, he is also criticised for his aggressive power game tendencies in the reorganisation of Japanese political parties in the 1990s. Some critics accuse him of being an opportunist, and point to his repeated party movements. His defenders say that in the relatively ideology-free landscape of Japanese politics, it is his adherence to principle that forces him into conflict with others.

In 2004, Ozawa was affected by a pension scandal. Although cleared of any legal wrongdoing, he stepped down from the DPJ leadership elections, in which he had been unopposed. This forced Katsuya Okada to assume leadership of the party. Okada resigned after his party suffered dramatic losses in the September 2005 general election, and his successor Seiji Maehara resigned in April 2006. Ozawa was elected president again on 7 April.

The Economist called Ozawa an "increasingly ineffectual bully" in July 2007 and partially blamed him both for enervating reformists in his own party and for DPJ failure to profit from LDP predicaments.[5]

In August 2007, Ozawa said that the War in Afghanistan was an American fight that "had nothing to do with the United Nations or the international community."[6]

Ozawa published an article in the leftist monthly political magazine Sekai in October 2007, stating his intention to deploy the Japan Self-Defense Forces as part of the UN-mandated International Security Assistance Force (ISAF) to Afghanistan if he ever assumes power in the new cabinet. The article was published as a rebuttal to a UN political officer who criticised Ozawa's position to oppose Japan's continual support of the maritime interdiction forces in the Indian Ocean.[7]

The article was published with an intention to provide a viable alternative to the government's plan to continue stationing the Maritime Defense Forces for logistical support of Operation Enduring Freedom in Afghanistan. However, faced with mounting criticism from both sides of the political spectrum, Ozawa later softened his statement and explained that his intent was to deploy the GSDF (Ground Self-Defense Forces) for logistical support of the civilian component of ISAF, presumably suggesting the PRT or Provincial Reconstruction Team which is a civil-military cooperation unit that works on reconstruction efforts in the provincial areas of Afghanistan.

On 24 February 2008, he stated that only the United States Seventh Fleet should be based in Japan.[8] His remarks drew criticism from members of both the LDP and DPJ.[9][10]

In November 2009, while visiting the president of the Japan Buddhist Federation, Ozawa declared that Christianity is an "exclusive and self-righteous religion" and that "European and U.S. societies with a background of Christianity are bogged down". He also stated that Islam "is better than Christianity but it is also exclusive."[11][12]

In August 2010, Ozawa expressed admiration for American democracy and praised Americans for electing Barack Obama as President, but he also labeled Americans as "monocellular" and "simple-minded".[13][14] In the same speech, Ozawa said, "I don't like British people."[15][16] 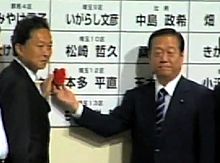 With Yukio Hatoyama (left) at the Laforet Museum, Roppongi, on 30 August 2009

After becoming the leader of the Democratic Party, Ozawa led the party to its largest victory in history in the upper house election on 29 July 2007.

On 4 November 2007, Ozawa announced he would resign as leader of the DPJ, after a controversial proposal made by Prime Minister Yasuo Fukuda about a grand coalition between the DPJ and the ruling LDP. He brought the proposal to a meeting of the DPJ leadership, which rejected it. He faced criticism for failing to immediately reject the proposal. At a news conference, he said that he took responsibility for this political turmoil.[17] He also said that he was not leaving the party.[18] There was speculation that the proposal originally came from Ozawa. However, Ozawa denied the press speculation except the Asahi Shimbun and the Nihon Keizai Shimbun, and he said that they manipulated public opinion.[19] It was reported that the power broker of the proposal was Yomiuri Shimbun's executive director Tsuneo Watanabe.[20] On 6 November 2007, he retracted his resignation offer after he was asked to stay on as leader by senior party officials and members.[21]

The DPJ re-elected Ozawa as party leader for the third time on 21 September 2008. Ozawa stated on this occasion: "I will do my best, considering this is my last chance to put an end to the LDP-led government and bring about a government that puts a priority on people's lives."[22][23] He was also announced by Secretary-General Yukio Hatoyama to have decided to switch from Iwate Constituency No. 4 to Tokyo Constituency No. 12 at the next House of Representatives election.[24][dead link]

Ozawa resigned as DPJ president in May 2009 due to another scandal and was succeeded by Hatoyama. At the time of the August 2009 general election, Ozawa acted as the DPJ's chief election strategist and remained a very powerful figure in the party. The DPJ won an overwhelming victory in the 2009 election and Hatoyama became prime minister, and it was believed that Ozawa's influence would increase further.[26] However, continuing finance scandals have left many Japanese questioning his integrity.[27] A prosecution inquest panel has concluded: 'It is highly likely that Ozawa is an accomplice' in a scandal involving the purchase of land in Tokyo, 'and should therefore stand trial'.[28]

On 31 January 2011, Ozawa was indicted over a controversial land purchase made by his political funds organization. The indictment was expected to increase calls by other DPJ lawmakers for Ozawa to resign from the party.[29]