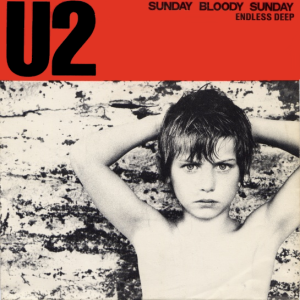 "Sunday Bloody Sunday" is the opening track and third single from 's 1983 album, "War". The song is noted for its militaristic drumbeat, simple but harsh guitar, and melodic harmonies.

The song has remained a staple of U2's live concerts.

"Sunday Bloody Sunday" grew from a guitar riff and lyric written by in 1982. While newlyweds and honeymooned in , The Edge worked in Ireland on music for the band's upcoming album. Following an argument with his girlfriend, and a period of doubt in his own song-writing abilities, The Edge—"feeling depressed"—"channeled [his] fear and frustration and self-loathing into a piece of music."

Drummer Mullen said of the song in 1983:

"We're into the politics of people, we're not into politics. Like you talk about Northern Ireland, 'Sunday Bloody Sunday,' people sort of think, 'Oh, that time when 13 Catholics were shot by British soldiers'; that's not what the song is about. That's an incident, the most famous incident in Northern Ireland and it's the strongest way of saying, 'How long? How long do we have to put up with this?' I don't care who's who - Catholics, Protestants, whatever. You know people are dying every single day through bitterness and hate, and we're saying why? What's the point? And you can move that into places like El Salvador and other similar situations - people dying. Let's forget the politics, let's stop shooting each other and sit around the table and talk about it. It's like when we first started with Boy, an album about growing up, then you had October, a spiritual album. During those two albums we were thrown across the world into different countries and suddenly we had to grow up. People were throwing money on the stage during the times of in Northern Ireland. So we had to think about Northern Ireland, and then there's nuclear war and solidarity. All these things we became really aware of so we wrote about them. They honestly affected us, they hurt, badly. A lot of people say to us, 'how can you write about Northern Ireland when you don't live there?' And you were saying about the Undertones, a band who actually said to us, 'what right do you have?' Well, the bombs don't go off in Dublin but they're made there and we feel as Irishmen we've got the right to say something. There are very few bands that say, 'why don't you just put down the guns?' there are a lot of bands taking sides saying politics is crap, etc. Well, so what! The real battle is people dying, that's the real battle. Politics and music I find very hard to distinguish, where do you draw the line?

The studio version of the song opens with a militaristic drumbeat and part, both at a medium tempo, in a 4/4 time.

In contrast to the violent nature of the verses, the emergence of s creates a feeling of hope during Bono's "How long, how long must we sing this song?" refrain. During the chorus, The Edge's backing vocals further develop this tread, using a harmonic imitative echo. The snare drum is absent from this section, and the guitar parts are muted. This part of the song deviates musically from the raw aggression seen in the song's verses and gives the song a more uplifting structure.

The band have said the lyrics refer to the events of both and , but are not specifically about either event.

Early versions opened with the line "Don't talk to me about the rights of the IRA, UDA". U2's bassist, , recalls that better judgment led to the removal of such a politically charged line, and that the song's "viewpoint became very humane and non-sectarian…which, is the only responsible position."

U2 was aware when they decided to record "Sunday Bloody Sunday" that its lyrics could be misinterpreted as , and possibly jeopardize their personal lives. Some of The Edge's original lyrics explicitly spoke out against violent rebels, but were omitted in order to protect the group.

Commercially, the single had its biggest impact in , where it reached number 3 on the national charts. In the U.S., the song gained significant radio airplay, and together with the earlier "New Year's Day" helped exposed U2 to a mainstream American rock audience.

Critical reaction to the song was mostly positive. In the Irish magazine "Hot Press", Liam Mackey wrote that "Sunday Bloody Sunday" "takes the widescreen view…a powerful riff and machine-gun drumming [is] crisscrossed by skipping violin." Denise Sullivan commented for "" that Mullen's opening drumwork "helps set the tone for the unforgiving, take-no-prisoners feel of the song, as well as for the rest of the album." In 2004, "Rolling Stone" ranked "Sunday Bloody Sunday" 268th on its list of .

"Sunday Bloody Sunday" has been performed more than 600 times by U2. It was first heard by a live audience in December 1982 in Glasgow, Scotland, on a twenty-one show "Pre-." The band were particularly nervous about playing the song in , . Upon introducing the song there at the Maysfield Leisure Centre , Bono promised to "never play it again" if the crowd didn't like it. The crowd overwhelmingly enjoyed the song; The Edge recalls that "the place went nuts, it drew a really positive reaction.", also saying that "We thought a lot about the song before we played it in Belfast and Bono told the audience that if they didn't like it then we'd never play it again. Out of the 3,000 people in the hall about three walked out. I think that says a lot about the audience's trust in us." [cite book | last = U2 Limited | title = U2 by U2 | publisher = HarperCollins"Publishers" | date = 2006 | location = London | pages = 179| id = ISBN 0-00-719668-7] The band remained apprehensive, however. Even by the song's sixth performance, Bono was introducing the song with the statement "This is "not" a rebel song."

Throughout 1983's War Tour, Bono continued to reassure audiences that "This song is not a rebel song, this song is 'Sunday Bloody Sunday'"

As U2 reached new levels of fame in 1987 with "", "Sunday Bloody Sunday" continued to be a focal point of concerts. Some performances featured slower, more contemplative versions of the song; other concerts saw the wilder, more violent version. This tour marked the first time "Sunday Bloody Sunday" was played in since 1982, and it has not been performed there since.

The 1988 "" includes a particularly renowned version of the song, recorded on 8 November 1987 at the in . [cite book |last= Chatterton|first= Mark|title= U2 The Complete Encyclopedia|year= 2001|publisher= Firefly Publishing|location= London] On this version Bono's mid-song rant angrily and emphatically condemns the that had occurred earlier that same day in the Northern Irish town of :

After the Joshua Tree Tour, Bono was heard saying the band might never play the song again, because the song was "made real" with the performance in Denver, and it could never be matched again.

"Sunday Bloody Sunday" was played at every concert on the 2001 Elevation and 2005–2006 Vertigo tours. Performances in 2001 frequently included parts of 's "" and "Johnny Was". A memorable mid-song message referencing the of 1998 ("Turn this song into a prayer!") is captured on the live DVD "". In concerts in after the , the "no more!" interlude was replaced by Bono holding an American flag.

"Sunday Bloody Sunday" was used during the The Vertigo Tour of 2005 and 2006, as one of many politically driven songs performed during the middle part of the band's set. Bono extended the "no more!" interlude to explain a headband he had donned in the previous song.

Although a promotional had not been produced for the original release, the band used footage from a 5 June 1983 live performance to promote the song. "", directed by Gavin Taylor, displays Bono's use of a during performances of the song. The video highlights the intensity and emotion felt by many audience members during U2's concerts, while the rainy, torch-lit setting in 's further adds to the atmosphere. In 2004, "Rolling Stone" cited the performance as one of fifty moments that changed the history of rock and roll, and noted that " [t] he sight of Bono singing the anti-violence anthem 'Sunday Bloody Sunday' while waving a white flag through crimson mist (created by a combination of wet weather, hot lights and the illumination of those crags) became the defining image of U2's warrior-rock spirit and—shown in heavy rotation on MTV—broke the band nationwide."

"Sunday Bloody Sunday" was commercially released throughout most of Europe in support of U2's album "War". Its cover art is the same as that of "" except on the Japan release.

This was the most common version, released as a 7" vinyl in Germany and .

This was a less common 7" vinyl released as an alternate to the previous version.

This was the Japan 7" vinyl with an alternate B-side and different cover art.

This version was released as a 12" vinyl in several European countries, and later as a in .

"Sunday Bloody Sunday" has been covered by over a dozen different artists, spanning several musical styles.

* [http://www.u2-vertigo-tour.com/song11.html Live performance history] — lists all concerts at which "Sunday Bloody Sunday" is known to have been performed.
* [http://www.u2.com/music/lyrics.php?song=23&list=s Lyrics]