Two Ministers to Hawaii became paramount figures in the history of Hawaiian Islands. John L. Stevens, appointed by President Benjamin Harrison, was accused of being a conspirator in the overthrow of the monarchy of Queen Liliʻuokalani. James Henderson Blount, appointed by President Grover Cleveland, investigated the overthrow, submitting a report on July 17, 1893, resulting in the dismissal of Stevens from his foreign service career and the recommendation by Cleveland to restore the monarchy. Following Blount's report, and the refusal of the Provisional Government to abide by Cleveland's wishes, a Senate committee appointed by Cleveland to further investigate the matter exonerated Stevens and the U.S. peacekeepers from any role in the Hawaiian Revolution, submitting the Morgan Report on February 26, 1894. Following that final investigation on the matter, Cleveland rebuffed further requests from the queen for interference, and engaged in normal diplomatic relations with both the Provisional Government and the Republic of Hawaii.

The first representatives were given the unpaid title of Agent for Commerce and Seamen and in 1844 given the title of Consul. There are gaps and overlaps in the dates due to the six-month journey from the eastern Unitest States to Hawaii at the time.[1]

In 1843 the diplomatic representative was called Commissioner.[1]

This is a list of American Ministers (replacing the rank of Commissioner, similar to current rank of Ambassador) to the Kingdom of Hawaii from 1863 to 1893. 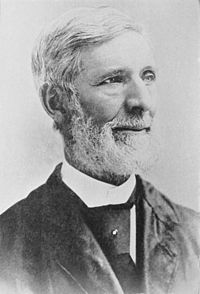 John L. Stevens, United States Minister to Hawaii, ordered the landing of the United States Marine Corps on Oʻahu which has been subjected to competing historical interpretations.