Passive immunity is the transfer of active humoral immunity in the form of readymade antibodies, from one individual to another. Passive immunity can occur naturally, when maternal antibodies are transferred to the fetus through the placenta, and can also be induced artificially, when high levels of human (or horse) antibodies specific for a pathogen or toxin are transferred to non-immune individuals. Passive immunization is used when there is a high risk of infection and insufficient time for the body to develop its own immune response, or to reduce the symptoms of ongoing or immunosuppressive diseases.[1]

Maternal passive immunity is a type of naturally acquired passive immunity, and refers to antibody-mediated immunity conveyed to a fetus by its mother during pregnancy. Maternal antibodies (MatAb) are passed through the placenta to the fetus by an FcRn receptor on placental cells. This occurs around the third month of gestation.[2] Immunoglobulin G is the only antibody isotype that can pass through the placenta.[2] Immunization is often required shortly following birth to prevent diseases such as tuberculosis, hepatitis B, polio, and pertussis, however, maternal antibodies can inhibit the induction of protective vaccine responses throughout the first year of life. This effect is usually overcome by secondary responses to booster immunization.[3]

Passive immunity is also provided through the transfer of IgA antibodies found in breast milk that are transferred to the gut of the infant, protecting against bacterial infections, until the newborn can synthesize its own antibodies.[4]

Artificially acquired passive immunity is a short-term immunization achieved by the transfer of antibodies, which can be administered in several forms; as human or animal blood plasma or serum, as pooled human immunoglobulin for intravenous (IVIG) or intramuscular (IG) use, as high-titer human IVIG or IG from immunized or from donors recovering from the disease, and as monoclonal antibodies (MAb). Passive transfer is used prophylactically in the case of immunodeficiency diseases, such as hypogammaglobulinemia.[5] It is also used in the treatment of several types of acute infection, and to treat poisoning [1] Immunity derived from passive immunization lasts for only a short period of time, and there is also a potential risk for hypersensitivity reactions, and serum sickness, especially from gamma globulin of non-human origin.[4] Passive immunity provides immediate protection, but the body does not develop memory, therefore the patient is at risk of being infected by the same pathogen later.[4]

The birth of passive immunotherapy may have begun with Mithridates VI of Pontus, who sought to harden himself against poison, and took daily sub-lethal doses of poison to build tolerance. Mithridates is also said to have fashioned a 'universal antidote' to protect him from all earthly poisons.[6] For nearly 2000 years, poisons were thought to be the proximal cause of disease, and a complicated mixture of ingredients, called Mithridate, was used to cure poisoning during the Renaissance.[6] An updated version, Theriacum Andromachi, was used well into the 19th century.[7] 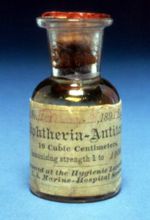 A vial of diphtheria antitoxin, dated 1895

In 1888 Emile Roux and Alexandre Yersin isolated diphtheria toxin, and following the 1890 discovery of an antitoxin based immunity to diphtheria and tetanus, by Emil Adolf von Behring and Kitasato Shibasaburō, and antitoxin became the first major success of modern therapeutic Immunology.[6]

The artificial induction of passive immunity has been used for over a century to treat infectious disease, and prior to the advent of antibiotics, was often the only specific agents available to treat certain infections. Immunoglobulin therapy was continued to be a first line therapy in the treatment of severe respiratory diseases until the 1930’s, even after sulfonamides were introduced.[5]

In 1890 antibody therapy was used to treat tetanus, when serum from immunized horses was injected into patients with severe tetanus in an attempt to neutralize the tetanus toxin, and prevent the dissemination of the disease. Since the 1960’s, human tetanus immune globulin (TIG) has been used in the United States in un-immunized or incompletely immunized patients who have sustained wounds consistent with the development of tetanus.[5] The administration of horse antitoxin remains the only specific pharmacologic treatment available for botulism.[8] Antitoxin is often also given prophylactically to individuals known to have ingested contaminated food. IVIG treatment was also used successfully to treat several victims of toxic shock syndrome, during the 1970’s tampon scare.

Antibody therapy is also used to treat viral infections. In 1945, hepatitis A infections, epidemic in summer camps, were successfully prevented by immunoglobulin treatment. Similarly, hepatitis B immune globulin (HBIG) effectively prevents Hepatitis B infection. Antibody prophylaxis of both Hepatitis A and B has largely been supplanted by the introduction of vaccines however it is still indicated following exposure and prior to travel areas of endemic infection.[9]

In 1953, human vaccinia immunoglobulin (VIG) was used to prevent the spread of smallpox during an outbreak in Madras, India, and continues to be used to treat complications arising from smallpox vaccination. Although the prevention of measles is typically induced through vaccination, it is often treated immuno-prophylactically upon exposure. Prevention of rabies infection still requires the use of both vaccine and immunoglobulin treatments.[5]

During a 1995 Ebola virus outbreak in the Democratic Republic of Congo, whole blood from recovering patients, and containing anti-Ebola antibodies, was used to treat eight patients, as no effective means of prevention or treatment currently exists. Only one of the eight infected patients died, compared to a typical 80% Ebola mortality, which suggested that antibody treatment may contribute to survival.[10] Immunoglobulin has been used to both prevent and treat reactivation of the herpes simplex virus (HSV), varicella zoster virus, Epstein-Barr virus (EBV), and cytomegalovirus (CMV).[5]

The following immunoglobulins are some of the immunoglubulins currently used for infectious disease prophylaxis and immunotherapy, in the United States.[11]

The one exception to passive-humoral immunity is the passive transfer of cell mediated immunity, also called adoptive immunization which involves the transfer of mature circulating lymphocytes. It is rarely used in humans, and requires histocompatible (matched) donors, which are often difficult to find, and carries severe risks of graft versus host disease.[1] This technique has been used in humans to treat certain diseases including some types of cancer and immunodeficiency. However, this specialized form of passive immunity is most often used in a laboratory setting in the field of Immunology, to transfer immunity between "congenic", or deliberately inbred mouse strains which are histocompatible.