Brusio is a municipality in the district of Bernina in the canton of Graubünden in Switzerland.

The monastery of San Romerio (earlier, San Remigio) was founded above the Val Poschiavo before 1055. Soon there after the village of Brusio was settled on the valley floor below the monastery. The monastery influenced this early stage of settlement and growth in the village. By 1212 it was an independent municipality with its own dean or senior pastor who represented the municipality's interests. In the 13th Century, the entire Val Poschiavo became part of the fief of the Bishop of Chur. During the 14th Century, Brusio was part of the practically (but not officially) independent municipality of Poschiavo. Around 1498, Poschiavo (with Brusio) joined the League of God's House and by extension, the Three Leagues. During the conquest of the Valtellina valley by the Three Leagues, the hamlets of Campocologno (1518) and Zalende (1526) were founded. In 1610 Brusio tried to leave the municipality of Poschiavo, but it wasn't until 1851 that they were successful. In 1863, the previously Italian, side valley of Saiento and the hamlet of Cavajone joined Brusio and became Swiss.[3] 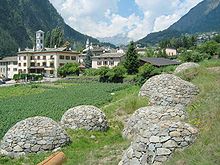 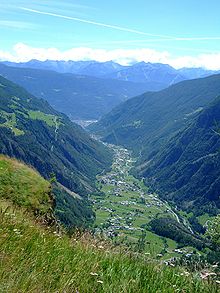 The municipality is located in the Brusio sub-district of the Bernina district. It is located in the Val Poschiavo on the road from the Bernina Pass into Italy. It consists of the hamlets of Campocologno, Zalende, Campascio, Brusio, Piazzo and parts of Miralago as well as the small settlements of Viano und Cavaione high in the mountains.

The entire Swiss population is generally well educated. In Brusio about 61% of the population (between age 25-64) have completed either non-mandatory upper secondary education or additional higher education (either University or a Fachhochschule).[4]

The historical population is given in the following table:[3][5] 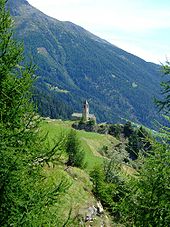 The monastery of San Romerio (also San Remigio) was founded in the hills above the Val Poschiavo before 1055. The village of Brusio was settled soon after and was heavily influenced by the monastery.