The New Italian Socialist Party (Italian: Nuovo Partito Socialista Italiano, NPSI) is a small political party in Italy which professes a social-democratic ideology and claims to be the successor to the old Italian Socialist Party, which was disbanded after the judiciary tempest of the early 1990s (see Mani pulite). The party functions as an associate party or internal faction of the main party of the Italian centre-right, The People of Freedom (PdL).

Most of the party's members are former followers of Bettino Craxi, whom they often portray as a victim of political persecution, notwithstanding the many convictions he received on corruption charges. That was why the party has been an ally of the centre-right House of Freedoms coalition for most of its history, as the centre-left was dominated by former Communists who were the main opponents of the Socialists, so that most of them had earlier joined Forza Italia.

The main leader of the party has been Gianni De Michelis, who however left the party in 2007, being replaced by Stefano Caldoro. In 2007 several members left to join the centre-left Socialist Party, while what remained of the NPSI was merged into the centre-right PdL. Since 2010, the party leader Caldoro has been President of Campania for the PdL.

At its founding congress, the NPSI decided to enter the new centre-right House of Freedoms coalition headed by the former friend of Bettino Craxi, Silvio Berlusconi. Its decision regarding not entering the centre-left coalition laid in the past during Mani Pulite affair when the old Italian Socialist Party disintegrated while the ex-Communist party was left untouched.

The House of Freedoms won the 2001 general election and Berlusconi included in his government Stefano Caldoro, a young Socialist, as deputy minister for Education. In the election, the NPSI gained just 1.0% of the vote for the Chamber of Deputies and had three deputies and one senator elected in single-seat constituencies thanks to the support of Forza Italia. The elected MPs were Bobo Craxi, Vincenzo Milioto, Chiara Moroni and Franco Crinò. Party secretary Gianni De Michelis and spokesman Claudio Martelli were not elected since the party failed to pass the 4% threhold.

At the 2004 European Parliament election, the NPSI formed an alliance with small social-democratic movements and parties such as Socialist Unity, founded and headed by Claudio Signorile. The list, named Socialists United for Europe, gained 2.0% of the vote, and two MEPs, Gianni De Michelis and Alessandro Battilocchio. In Calabria the list gained 7.0%, the highest result ever for the party. The party was denied membership to the Socialist Group and the two NPSI MEPs sat as Non-Inscrits. They eventually joined the Party of European Socialists in October 2007 as members of the newly formed Socialist Party.

At the 2005 regional elections the NPSI ran its lists as part of the House of Freedoms. In Calabria, the party's stronghold, it received 5.4%. However, the House of Freedoms lost 12 regions out of 14, forcing Berlusconi to reshuffle cabinet. In the new government Caldoro was promoted minister.

In October 2005 a national congress was held in Rome in order to deliberate the new political line to be held by the party, particularly about electoral coalitions. During the congress, which was characterized by a heated atmosphere and several controversies, Bobo Craxi, who supported a "unity towards left" within The Union and an immediate retirement from the Berlusconi government, challenged Gianni De Michelis, who instead asked the congress to delay such a decision.

De Michelis received support from Caldoro, Alessandro Battilocchio, Chiara Moroni, whereas Craxi was supported by Vincenzo Milioto, Francesco Crinò and Saverio Zavettieri, the powerful Calabrian leader of the party. At some point, De Michelis unrecognised the congress, declaring it had never been officially opened, and abandoned it with all of his supporters. Craxi's supporters thus elected Craxi secretary. Later, the Tribunal of Rome nullified the congress's outcome.

Bobo Craxi's faction abandoned the party immediately after the Tribunal's verdict, was re-organised into The Italian Socialists and joined The Union. De Michelis, after winning the legal dispute for the symbol and the leadership of the NPSI, led the party into an alliance with Christian Democracy for Autonomies (DCA) of Gianfranco Rotondi. 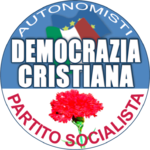 The DCA-NPSI alliance gained just 0.7% of the vote for the Chamber of Deputies and 0.6% for the Senate. Despite not passing the 2% threshold, it still had six deputies elected because it was the party that received more votes under the 2% threshold in its alliance, the House of Freedoms. Of these, two were of the NPSI: Lucio Barani and Mauro del Bue. Two more candidates were elected as candidates of Forza Italia. However, these two (Chiara Moroni and Giovanni Ricevuto), abandoned the party in May, fearing that the party was heading out from the House of Freedoms.

Nonetheless the NPSI and its two MPs formed a joint parliamentary group with its former ally Christian Democracy for Autonomies comprising six MPs in total, which made it a minimal force in Parliament.

In June 2007 the party split among those who wanted to participate to the foundation of the Socialist Party along with the Italian Democratic Socialists of Enrico Boselli, The Italian Socialists of Bobo Craxi and the Association for the Rose in the Fist of Lanfranco Turci and those who wanted to maintain the allegiance to the House of Freedoms coalition. The first group was led by Gianni De Michelis, the second by Stefano Caldoro.

From July to October, the party had actually two secretaries, elected in two separate congresses: on 24 June Stefano Caldoro was elected secretary of the right-wing faction of the party, while on 7 July Mauro Del Bue replaced De Michelis as leader of those NPSI members who wanted to take part in the foundation of a new Socialist Party, whose first meeting took place on 14 July 2007. After the split, both groups had a deputy: Mauro Del Bue for the NPSI–De Michelis and Lucio Barani for the NPSI–Caldoro.

In October, after a consensual separation between the two groups and the foundation of the Socialist Party by Boselli, De Michelis, Craxi, Turci and splinters from Democratic Left (including Gavino Angius and Valdo Spini), the group of De Michelis changed name into Socialist Party (coherently with name of the future party), while the group of Caldoro retained the party's name and decided to change symbol. Since that moment the only NPSI was that led by Caldoro, who announced that its party was interested in joining The People of Freedom (PdL) along with Forza Italia and National Alliance.

The People of Freedom

At the 2008 general election NPSI got two deputies re-elected in the lists of the PdL: Stefano Caldoro and Lucio Barani. In March 2009 the party was merged into the PdL, but has retained some of its autonomy. In the 2010 Campania regional election Caldoro was elected President by a landslide.

Following his election, Caldoro stepped down from party secretary and was succeeded by Barani. Caldoro was then elected party president.[2]