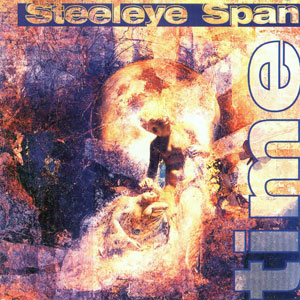 "Time" is an album by .The album was released in 1996, after a seven year hiatus. The impetus for the album was a 25th anniversary reunion tour the year before, during which most of the former members of the band performed together. was experiencing voice problems so she spoke to Gay Woods, a founding member who had left the band after the first album, to rejoin. Woods initially resisted this move, since she had not performed publicly for some time, but Prior eventually prevailed and Woods returned to the band. The result was only the second Steeleye Span album to feature two female singers, which was used to very good effect on the ironic ‘Old Maid in the Garrett’ and to a lesser extent on ‘the Prickly Bush’ and ‘the Cutty Wren’. Both Prior and Woods provide lead vocals on different songs. Prior’s voice troubles are reflected in her musical choices on this album; she generally sings less powerfully and in a lower range, but still effectively. Woods also introduced a few Irish elements to the band’s repertoire, including the "Old Maid in the Garrett/Tam Lin reel" and her bodhran. This album was to be Prior’s last album with Steeleye Span until 2004’s .

In some ways, the album represents a revival of . After a 16 year period during which the band released only three albums, the band entered a more productive phase that continues down the present, producing an album once every two years, including two in 2004.

The song "Corbies" is a remake of "", which appears on . The theme of "The Cutty Wren" had also been explored before, in the song "The King" on "", as well in "Hunting the Wren" on "Live at Last". In this version, the band experimented with a complex scheme of vocal and instrumental placement, which is best appreciated with headphones. Overall, this version is much darker than "The King" and somewhat menacing.

The album's sound is rather fuller and more lush than their earlier albums, thanks in part to the addition of Harries' keyboards on several sounds, most notably "Corbies" and "The Elf Knight".