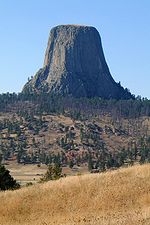 The Antiquities Act of 1906, officially An Act for the Preservation of American Antiquities (16 USC 431–433), is an act passed by the United States Congress and signed into law by Theodore Roosevelt on June 8, 1906, giving the President of the United States authority to, by executive order, restrict the use of particular public land owned by the federal government. The Act has been used over a hundred times since its passage. Its use frequently creates significant controversy.

The Antiquities Act resulted from concerns about protecting mostly prehistoric Indian ruins and artifacts – collectively termed "antiquities" – on federal lands in the West, such as at Chaco Canyon, New Mexico. Removal of artifacts from these lands by private collectors – "pot hunters," in the language of the time – had become a serious problem by the end of the 19th century. In 1902, Iowa Congressman John F. Lacey, who chaired the House Committee on the Public Lands, traveled to the Southwest with the rising anthropologist Edgar Lee Hewett, to see for himself the extent of the pot hunters' impact. His findings, supported by an exhaustive report by Hewett to Congress detailing the archaeological resources of the region, provided the necessary impetus for the passage of the legislation.

The Act was intended to allow the President to set aside certain valuable public natural areas as park and conservation land. The 1906 act stated that it was intended for: "... the protection of objects of historic and scientific interest." These areas are given the title of "National Monuments." It also allows the President to reserve or accept private lands for that purpose. The aim is to protect all historic and prehistoric sites on United States federal lands and to prohibit excavation or destruction of these antiquities. With this act, this can be done much more quickly than going through the Congressional process of creating a National Park. The Act states that areas of the monuments are to be confined to the smallest area compatible with the proper care and management of the objects to be protected.

For any excavation, the Act requires that a permit (Antiquities Permit) be obtained from the Secretary of the department which has jurisdiction over those lands.

Presidential powers under the Act have been reduced twice. The first time followed the unpopular proclamation of Jackson Hole National Monument in 1943. The 1950 law that incorporated Jackson Hole into an enlarged Grand Teton National Park also amended the Antiquities Act, requiring Congressional consent for any future creation or enlargement of National Monuments in Wyoming.[3] The second time followed Jimmy Carter's use of the Act to create fifty-six million acres (230,000 km²) of National Monuments in Alaska. The Alaska National Interest Lands Conservation Act requires Congressional ratification of the use of the Antiquities Act in Alaska for withdrawals of greater than 5,000 acres (20.2 km²).[4]