The Constitutionalist Revolution of 1932 (sometimes also referred to as Paulista War) is the name given to the uprising of the population of the Brazilian state of São Paulo against the 1930 coup d'état whereby Getúlio Vargas assumed the nation's Presidency; Vargas was supported by the military and the political elites of Minas Gerais, Rio Grande do Sul and Paraíba. The movement grew out of local resentment from the fact that Vargas ruled by decree, unbound by a Constitution, in a provisional government. The 1930 coup also affected São Paulo by eroding the autonomy that states enjoyed during the term of the 1891 Constitution and preventing the inauguration of the governor of São Paulo Júlio Prestes in the Presidency of the Republic, while simultaneously overthrowing President Washington Luis, who was governor of São Paulo from 1920 to 1924. These events marked the end of the Old Republic.

The Revolution's main goal was to press the provisional government headed by Getúlio Vargas to abide by a new Constitution, since the elected President Prestes was kept from taking office. However, as the movement developed and resentment against President Vargas and his revolutionary government grew deeper, it came to advocate the overthrow of the Federal Government, and it was even speculated that one of the Revolutionaries' goals was the secession of São Paulo from the Brazilian federation. However, it is noted that the separatist scenario was used as guerrilla tactics by the Federal Government to turn the population of the rest of the country against the state of São Paulo, broadcasting the alleged separatist notion throughout the country. There is no evidence that the movement's commanders sought separatism. 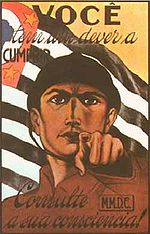 The uprising started on July 9th, 1932, after four protesting students were killed by government troops on 23 May 1932. On the wake of their deaths, a movement called MMDC (from the initials of the names of each of the four students killed, Martins, Miragaia, Dráusio and Camargo) started. A fifth victim, Alvarenga, was also shot that night, but died months later.

In a few months, the state of São Paulo rebelled against the federal government. Counting on the solidarity of the political elites of two other powerful states, (Minas Gerais and Rio Grande do Sul), the politicians from São Paulo expected a quick war. However, that solidarity was never translated into actual support, and the São Paulo revolt was militarily crushed on October 2nd, 1932. In total, there were 87 days of fighting (July 9th to October 4th, 1932 – with the last two days after the surrender of São Paulo), with a balance of 934 official deaths, though non-official estimates report up to 2,200 dead, and many cities in the state of São Paulo suffered damage due to fighting.

In spite of its military defeat, some of the movement's main demands were finally granted by Vargas afterwards: the appointment of a non-military state Governor, the election of a Constituent Assembly and, finally, the enactment of a new Constitution in 1934. However that Constitution was short lived, as in 1937, amidst growing extremism on the left and right wings of the political spectrum, Vargas closed the National Congress and enacted another Constitution, which established an authoritarian regime called Estado Novo.

July 9th marks the beginning of the Revolution of 1932, and is a holiday and the most important civic date of the state of São Paulo. The paulistas (as the inhabitants of São Paulo are known) consider the Revolution of 1932 as the greatest movement of its civic history. It was the first major revolt against the government of Getúlio Vargas and the last major armed conflict occurring in the history of Brazil.

For an off-beat look at this revolution by a traveler caught in the middle, see Peter Fleming's book Brazilian Adventure.