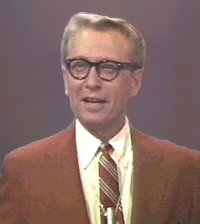 Allen Ludden (, - , ) was an American presenter and host. He was born Allen Packard Ellsworth in . The surname Ludden was his 's.

An English and dramatics major at the , he graduated with honors in 1940 and received his Master of Arts in English from the same university in 1941. He served in the , received a Bronze Star, and was discharged with the rank of Captain in 1946. During the late 1940s and early '50s he carved out a career as an advisor for youth in teen-magazine columns and on radio, and his radio show for teenagers, "Mind Your Manners", received a in 1950.

Ludden hosted many game shows, including the "GE College Bowl," but he was most famous for hosting both the daytime and primetime versions of "Password" on and ABC between 1961 and 1975. He started hosting an updated version of the game, "Password Plus", on , in 1979, but illness forced him off the show in 1980. Other shows hosted by Ludden include "", "", and "" He also hosted the original pilot for "" and had a talk-variety show, "".

Ludden, a Roman Catholic, was a widower with three children. His first wife, Margaret McGloin, had died from cancer in 1961. He proposed to twice-divorced , whom he had met on "Password", at least twice before she accepted. They were married from , until Ludden's death. They appeared together in an episode of "The Odd Couple" featuring Felix's and Oscar's appearance on "Password". Ludden also appeared as a guest panelist on "", with White sitting in the audience (she was prompted to rip apart one of Ludden's wrong answers on camera during an episode of "Match Game '74"; the two appeared together on the panel in 1975).

At the request of the publishers Dodd, Mead & Co., Ludden wrote and published four books of "Plain Talk" advice, plus a youth novel, "Roger Thomas, Actor!" (1959), all for young readers. He received the 1961 .

Ludden died from in Los Angeles in 1981. Several months earlier, he had suffered a stroke, which forced him to retire. took over hosting "Password Plus" until it went off the air in 1982.

He was posthumously awarded a star on the next to his widow's star. A walkway at the is named in his memory (his widow Betty White is a board member at the Zoo) and a manmade lake in Mineral Point is named Lake Ludden in his honor.

In January 2001, "" named Ludden the greatest game-show host of all time.

The Allen Ludden Papers collection is located at the Free Public Library in Mineral Point, Wisconsin. The items include letters written or received by Ludden, typed radio scripts, newspaper and magazine clippings by or about Ludden, publicity photographs and personal photographs, and a pair of horn-rimmed spectacles (which are broken). Betty White donated the collection. [http://www.swls.org/member.mi_localhistory.html The Mineral Point Public Library archives - the Allen Ludden Papers collection]