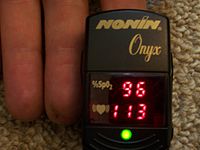 Pulse oximetry is a non-invasive method allowing the monitoring of the oxygenation of a patient's hemoglobin.

A sensor is placed on a thin part of the patient's body, usually a fingertip or earlobe, or in the case of an infant, across a foot. Light at red (660nm) and infrared (940nm) wavelengths is passed sequentially through the patient to a photodetector. The changing absorbance at each of the two wavelengths is measured, allowing determination of the absorbances due to the pulsing arterial blood alone, excluding venous blood, skin, bone, muscle, fat, and (in most cases) fingernail polish.[1] Based upon the ratio of changing absorbance of the red and infrared light caused by the difference in color between oxygen-bound (bright red) and oxygen-unbound (dark red or blue, in severe cases) blood hemoglobin, a measure of oxygenation (the percentage of hemoglobin molecules bound with oxygen molecules) can be made.

Pulse oximetry data is necessary whenever a patient's oxygenation may be unstable, as in intensive care, critical care, surgery and emergency department areas of a hospital. Data can also be obtained from pilots in unpressurized aircraft,[2] and for assessment of any patient's oxygenation in primary care. It is also very commonly used in the evaluation of the need for and the efficiency of the treatment of sleep apnea using positive airway pressure.[3] A patient's need for oxygen is essential to life; no human life thrives in the absence of oxygen (cellular or gross). Although pulse oximetry is used to monitor oxygenation, it cannot determine the metabolism of oxygen, or the amount of oxygen being used by a patient. For this purpose, it is necessary to also measure carbon dioxide (CO2) levels. It is possible that pulse oximetry can also be used to detect abnormalities in ventilation. However, detection of hypoventilation is impaired by the use of supplemental oxygen, as it is only when patients breathe room air that abnormalities in respiratory function can be detected reliably. Therefore, the routine administration of supplemental oxygen may be unwarranted if the patient is able to maintain adequate oxygenation in room air, since it can result in hypoventilation going undetected.[citation needed]

In 1935 Matthes developed the first 2-wavelength ear O2 saturation meter with red and green filters, later switched to red and infrared filters. This was the first device to measure O2 saturation.[4]

In 1949 Wood added a pressure capsule to squeeze blood out of ear to obtain zero setting in an effort to obtain absolute O2 saturation value when blood was readmitted. The concept is similar to today's conventional pulse oximetry but was hard to implement because of unstable photocells and light sources. This method is not used clinically. In 1964 Shaw assembled the first absolute reading ear oximeter by using eight wavelengths of light. Commercialized by Hewlett Packard, its use was limited to pulmonary functions and sleep laboratories due to cost and size.[citation needed]

Pulse oximetry was developed in 1974, by Takuo Aoyagi and Michio Kishi, bioengineers, at Nihon Kohden using the ratio of red to infrared light absorption of pulsating components at the measuring site. Susumu Nakajima, a surgeon, and his associates first tested the device in patients, reporting it in 1975.[5] It was commercialized by Biox in 1981 and Nellcor in 1983. Biox was founded in 1979, and introduced the first pulse oximeter to commercial distribution in 1981. Biox initially focused on respiratory care, but when the company discovered that their pulse oximeters were being used in operating rooms to monitor oxygen levels, Biox expanded its marketing resources to focus on operating rooms in late 1982. A competitor, Nellcor (now part of Covidien, Ltd.), began to compete with Biox for the US operating room market in 1983. Prior to its introduction, a patient's oxygenation could only be determined by arterial blood gas, a single-point measurement that takes a few minutes of processing by a laboratory. (In the absence of oxygenation, damage to the brain starts within 5 minutes with brain death ensuing within another 10–15 minutes). In the US alone, approximately $2 billion was spent annually on this measurement. With the introduction of pulse oximetry, a non-invasive, continuous measure of patient's oxygenation was possible, revolutionizing the practice of anesthesia and greatly improving patient safety. Prior to its introduction, studies in anesthesia journals estimated US patient mortality as a consequence of undetected hypoxemia at 2,000 to 10,000 deaths per year, with no known estimate of patient morbidity.[citation needed]

By 1987, the standard of care for the administration of a general anesthetic in the US included pulse oximetry. From the operating room, the use of pulse oximetry rapidly spread throughout the hospital, first to the recovery room, and then into the various intensive care units. Pulse oximetry was of particular value in the neonatal unit where the patients do not thrive with inadequate oxygenation, but also can be blinded with too much oxygen. Furthermore, obtaining an arterial blood gas from a neonatal patient is extremely difficult.[citation needed]

In 1995, Masimo introduced Signal Extraction Technology (SET) that could measure accurately during patient motion and low perfusion. Some have termed newer generation pulse oximetry technologies as high resolution pulse oximetry (HRPO).[6][7][8] One area of particular interest is the use of pulse oximetry in conducting portable and in-home sleep apnea screening and testing.[6][9]

Pulse oximetry measures solely of oxygenation, not ventilation, and it is not a substitute for blood gases checked in a laboratory because it gives no indication of base deficit, carbon dioxide levels, blood pH, or bicarbonate HCO3- concentration. The metabolism of oxygen can be readily measured by monitoring expired CO2. Saturation figures also give no information about blood oxygen content. Most of the oxygen in the blood is carried by hemoglobin. In severe anemia, the blood will carry less total oxygen, despite the hemoglobin being 100% saturated.

Falsely low readings may be caused by hypoperfusion of the extremity being used for monitoring (often due to the part being cold or from vasoconstriction secondary to the use of vasopressor agents); incorrect sensor application; highly calloused skin; and movement (such as shivering), especially during hypoperfusion. To ensure accuracy, the sensor should return a steady pulse and/or pulse waveform. Falsely high or falsely low readings will occur when hemoglobin is bound to something other than oxygen. In cases of carbon monoxide poisoning, the falsely high reading may delay the recognition of hypoxemia (low blood oxygen level). Methemoglobinemia characteristically causes pulse oximetry readings in the mid-80s. Cyanide poisoning can also give a high reading because it reduces oxygen extraction from arterial blood (the reading is not false, as arterial blood oxygen is indeed high in early cyanide poisoning).

Pulse oximetry only reads the percentage of bound hemoglobin. Hemoglobin can be bound to other gases such as carbon monoxide and still read high even though the patient is hypoxemic. The only noninvasive method that allows the continuous measurement of the dyshemoglobins is a pulse co-oximeter. Pulse co-oximetry was invented in 2005 by Masimo and currently allows clinicians to measure total hemoglobin levels in addition to carboxyhemoglobin, methemoglobin and PVI, which initial clinical studies have shown may provide clinicians with a new method for noninvasive and automatic assessment of patient fluid volume status.[11][12][13] Appropriate fluid levels are vital to reducing postoperative risks and improving patient outcomes as fluid volumes that are too low (under hydration) or too high (over hydration) have been shown to decrease wound healing, increase risk of infection and cardiac complications.[14]