Born at Whitby, Ontario 1862 as Georgina May Campbell,[1][2][3] her father, Robert E. Campbell of Whitby, Ontario, died when she was 13 years old and her stage-minded mother, Jane Draper, in need of money, encouraged May and her younger sister Flora to perform. They created a singing act, billed as the `Irwin Sisters`, that debuted at the Adelphi Theatre in nearby Buffalo, New York in December, 1874. By the fall of 1877, their careers had progressed and they were booked to appear at New York's Metropolitan Theater, then at the Tony Pastor Theatre, a popular New York City music hall. 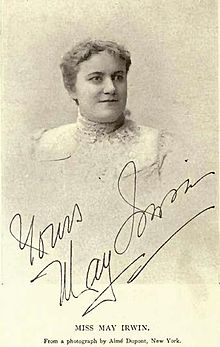 The Irwin sisters proved popular enough to earn regular spots for the ensuing six years, after which 21-year-old May set out on her own. She joined Augustin Daly's stock company from 1883 to 1887, where she made her first appearance on the theatrical stage. This comedienne was known for her improvisation skills. An immediate success, she went on to make her London stage debut at Toole's Theatre in August 1884. In 1886, her husband of eight years, Frederick W. Keller, died unexpectedly. Her sister Flora married Senator Grady.

By the early 1890s, Irwin had married a second time and developed her career into that of a leading vaudeville performer with an act known at the time as "Coon Shouting", in which she performed African American-influenced songs. In the 1895 Broadway show The Widow Jones, she introduced "The Bully Song", which became her signature number. The performance also featured a lingering kiss, which was seen by Thomas Edison, who hired Irwin and her co-star John C. Rice to repeat the scene on film. In 1896, Edison's Kinetoscope production, The Kiss, became the first screen kiss in cinematic history.

In addition to her performing and singing, Irwin also wrote the lyrics to several songs, including "Hot Tamale Alley", with music written by George M. Cohan. In 1907 she married her manager, Kurt Eisfeldt, and began making records for Berliner/Victor. Several of these recordings survive and give a notion of the actress's appeal.

Irwin's buxom figure was much in vogue at the time and, combined with her charming personality, made her one of America's most beloved performers for more than thirty years. In 1914, she made her second silent film appearance, this time in the feature-length adaptation of George V. Hobart's play, Mrs. Black is Back, produced by Adolph Zukor's Famous Players Film Company and filmed for the most part at her own sprawling home in New York. Still pictures showing May survive from this movie.

A highly paid performer, Irwin was a shrewd investor and became a very wealthy woman. She spent a great deal of time at a summer home on secluded Club Island, a small island off of Grindstone Island of the Thousand Islands, and at her winter home on Merritt Island, Florida, before retiring to a farm near Clayton, New York, where a street would eventually be named in her honor.

May Irwin was married twice. First Frederick W. Keller, of St. Louis from 1878 until his death in 1886. From 1907 to the end of her life she was married to Kurt Eisenfeldt. The couple lived at West 44th Street, New York.