Laura Ashley Bell Bundy (born April 10, 1981) is an American actress and singer who has performed in a number of Broadway roles, both starring and supporting, as well as in television and film. Her best known Broadway roles are the original Amber Von Tussle in Hairspray and the original Elle Woods in the musical version of Legally Blonde. She signed to Mercury Records Nashville and released her first country music single, "Giddy On Up," in early 2010. The album's second single, "Drop on By", was released to country radio on August 9, 2010.

Bundy was born in Euclid, Ohio and raised in Lexington, Kentucky.[1] Her mother, Lorna Bundy-Jones, manages a Victoria's Secret. Her father, Don Bundy, is an electrical engineer. She grew up dancing at Town and Village school of Dance, in Paris, Kentucky. Her parents divorced when she was 16 years old; both have since remarried.[2] She made her stage debut in regional theatre when she was nine years old. She graduated from Lexington Catholic High School in 1999. She got her start at Images Model Agency. Bundy was diagnosed with Coeliac Disease when she was about 18/19 years old.[3]

Bundy originated the role of Tina Denmark in the Off-Broadway musical Ruthless! The Musical. For this part, she was nominated for a 1993 Drama Desk Award for Outstanding Actress in a Musical. In 2002 she made her Broadway debut in the musical Hairspray, originating the role of Amber Von Tussle. Bundy was next a standby for both Kristin Chenoweth and Jennifer Laura Thompson in the role of Galinda in Wicked. From 2007 to 2008 she starred on Broadway in Legally Blonde: The Musical where she originated the lead role of Elle Woods, receiving her first Tony Award nomination for Best Leading Actress in a Musical. After leaving the show in July 2008 she was succeeded by Bailey Hanks, the winner of Legally Blonde - The Musical: The Search for Elle Woods.

Credits outside of New York include the national tour of The Sound of Music, Gypsy with Betty Buckley and Deborah Gibson at the Paper Mill Playhouse in Millburn, New Jersey and the Los Angeles production of Rock of Ages, in which she starred as Sherrie.

Offstage, Bundy has appeared in films including The Adventures of Huck Finn (1993), Life with Mikey (1993), and Jumanji (1995) as Young Sarah Whittle. She appeared in the 2006 film adaptation of Dreamgirls as a member of the fictitious pop group "Dave & the Sweethearts". Bundy was also seen on the CBS soap opera The Guiding Light as Marah Lewis for two years, (October 14, 1999 – October 29, 2001) as well as in television shows such as Veronica Mars, Happy Hour, Modern Men, Cold Case, and Strangers with Candy. She also appears in several short web videos as various comedic characters, such as Justice Goode and Shocantelle Brown. (Justice Goode, Shocantelle Brown)

Bundy released her debut country music album titled Longing For a Place Already Gone. After leaving Legally Blonde: The Musical on July 20, 2008, she moved back to Nashville to work on her second album.

On September 27, 2008, she headlined Anaheim, California's the Chance Theater with fellow Wicked alum Eden Espinosa, and with "Spring Awakening" alum Lea Michele for the Broadway Chance Style Up Close and Personal concert.

She guest-starred in the TV series, Cold Case with Adam Pascal and Tracie Thoms in the episode "Willkommen".

Bundy reprised the role of Elle Woods in the U.S. national tour of Legally Blonde as a temporary replacement for the injured Becky Gulsvig. She began her brief run on January 13, 2009 and ended it on February 22, 2009.[5] She was to play Elle again during the Nashville engagement of the national tour from June 23–28.[6] However, she fractured her arm during the performance on June 27, and finished the show, and was rushed to the hospital immediately after.[7]

Bundy has landed a recurring role on the sixth season of How I Met Your Mother as Becky, Robin's co-anchor.[8] 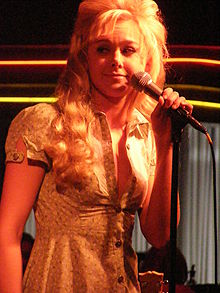 Bundy at Birdland in July 2007

Her first single, "Giddy On Up", debuted on the Billboard Hot Country Songs chart at number 60 for the chart week of February 20, 2010, and peaked at number 31 in May. The single was made into a music video, which was directed by Shane Drake. She also performed the song on the 2010 Academy of Country Music Awards, where it was done in the style of the music video. The next single, "Drop On By," was less successful than her debut, only peaking at number 48.

Her second album, Achin' and Shakin' was released on April 13, 2010. It debuted at number 5 on the Billboard Top Country Albums chart as well as number 28 on the all-genre Billboard 200. As of June 26, 2010, the album has sold over 70,000 copies in the United States.[9] It also charted internationally, where it reached number 34 on the Norwegian Albums Chart.

Bundy also appeared in fellow country artist Miranda Lambert's music video for "Only Prettier", as one of Lambert's friends alongside Kellie Pickler and Hillary Scott of Lady Antebellum.

Bundy began as the spokesperson for the Selected Chevrolet Dealers of Middle Tennessee in September 2011.