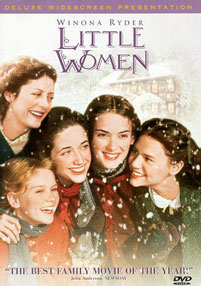 
"Little Women" is the 1994 film version of the classic novel, "" adapted by and directed by . It stars as Marmee March, as Josephine 'Jo' March, as Beth March, as Younger Amy March, and as Theodore 'Laurie' Laurence.

The film was nominated for three including Best Actress in a Leading Role for , Best Costume Design, and Best Music, Original Score for composer .

The movie follows the March sisters, Meg (16), Jo (15), Beth (13) and Amy (12), as they grow up during and after the . The family is faced with major and minor problems that they confront head on sharing laughter, tears, and some awkward moments. With their father away fighting in the Civil War, the girls are led by their strong-willed mother whom they affectionately call Marmee. One of the ways the girls find to deal with all that is going on is to create their own attic theater company, the Pickwick Society, where they write and perform in their own plays (especially Jo who is the central figure in organizing and writing the skits).

A lime becomes a rare and precious commodity that also serves as a lesson to the youngest, Amy, who succumbs to her moral values and goes with her family to deliver their meal with a family even less fortunate than their own. It is this selfless compassion that leads to tragedy for one of the girls, Beth. The sisters have their tiffs, especially Jo, around whom the story mostly revolves.

Next door to them is a wealthy elderly man named Mr. Laurence, who at first keeps his distance from the March family. When his grandson Theodore (nicknamed "Laurie") moves in with him, Laurie becomes the girls' friend. One of the girls' favorite diversions is acting out Jo's many spirited plays - highly unrealistic and romantic, so they perform in secret. Jo invites Laurie to join their troupe, and he donates a mail-box as a peace offering. Over time, Mr. Laurence also becomes a kind friend, especially toward Beth, who plays the piano exquisitely and reminds him of his late "little girl" (presumably Laurie's aunt). Meg falls in love with Laurie's tutor, John Brooke, causing Jo to realize their childhood is coming to an end.

As the girls grow up, they learn in their own time about life, loss, and most importantly, love. When their father gets hurt in the war and Marmee can't afford a train ticket, Jo sells her hair to a wig shop to pay for it. When Jo reveals her hair to the family, all are shocked; especially young Amy, who rudely remarks that Jo's hair was "her one beauty". While Marmee is away, Beth contracts scarlet fever from the neighbor's infant. When Meg and Jo realize there is nothing that can be done to save their sister, they send for Marmee to return, while sending Amy away to live with Aunt March. Laurie, who accompanies her on the trip, vows to come and take Amy away if Aunt March is unkind to her; he also promises to kiss her before she dies, in response to one of her romantic speeches. Prior to Beth's illness, Jo had been Aunt March's companion for years and hated every minute of it; the only reason she continued was knowing that one day Aunt March would go to Europe and would have to take Jo with her. Amy, as the sister most obsessed with money and good-looks, thrives as Aunt March's new companion.

Mr. March finally returns home just in time for Christmas. Three years pass before Meg and John Brooke are married, meanwhile, Beth's health is growing steadily worse. Laurie graduates from college and admits his love for Jo, begging her to marry him and go away to London with him. Jo realizes, however, that she could never love Laurie more than as a wonderful big brother, so she refuses him. Heartbroken, Laurie flees to England. Jo later deals with the added disappointment that Aunt March has decided to take Amy, who is now seventeen, with her to Europe instead of taking Jo. Crushed, she resolves to leave her home in Concord for New York City to pursue her dream of writing and experiencing life. She meets Friedrich Bhaer, a German who lives at the boarding house where she stays. Friedrich challenges and stimulates Jo intellectually, introducing her to opera and philosophy, and spurs her to become an even better writer.

Meanwhile, in Europe, we find that Amy's trip has served her well; she has improved her painting, and runs into her old childhood friend, Laurie. Finding that he has become dissolute and irresponsible, Amy censures him and refuses to have anything more to do with him until he pulls himself together. Stung, and fearing that Amy may marry the "stable"--and extremely wealthy--Fred Vaughn, whom she does not love, Laurie writes her a letter telling her that he is going to London to work for his grandfather, and make himself worthy of Amy, and in the meantime for her "not to do anything we shall regret."

Jo is summoned home from New York by news of Beth's decline, and rushes back to Concord to her sister, who finally succumbs to the lingering effects of the scarlet fever, from which she has been suffering for the past four years. Grieving for her sister, Jo retreats to the safety of her writing garret and begins to write out her life story. She moves through her mourning by continuing to write, and eventually, when finished, she sends it off to her friend Professor Bhaer. In the meantime, Meg gives birth to twins John "Demi" and Daisy.

Meanwhile, a letter from Amy informs the family that Aunt March is bedridden and would not survive a sea voyage; Amy must stay in Europe with her ailing aunt. Laurie, in London, receives a letter from Jo informing him of the family's loss, and the fact that Amy is waiting in Vevey, unable to come home. Laurie immediately leaves London and travels to be at Amy's side.

After they are reunited at Vevey, to everyone's shock - especially Jo's - Laurie and Amy return home married. Although she bears no hard feelings over the marriage, Jo admits to being momentarily shaken as Laurie walks into the March home with her sister Amy as his new bride.

When Aunt March dies, she leaves Jo her home of Plumfield. Jo settles on the idea of turning it a school. When Jo returns from the garden one day she finds her published manuscript that has now been titled "Little Women". She discovers that it was hand-delivered by a "foreign gentleman"--Friedrich--and that he has just left, accidentally leaving his umbrella behind. Jo rushes to find him, his umbrella in hand.

She finds Friedrich at the end of the March's driveway, and thanks him for her book. He tells her that he is leaving for the West, where he has found a position as a teacher. Jo tells him about Plumfield, and her idea for the school, but Friedrich congratulates her wistfully on her marriage, and says that he must go. Jo tells him that he is mistaken, it is her sister Amy who married Laurie, and that she is not herself married. At that moment, Friedrich proposes and Jo accepts. The film ends with the two lovers kissing in the rain.