/ˈwɒrətɑːz/ or /ˌwɒrəˈtɑːz/;[1] referred to as HSBC Waratahs for sponsorship reasons, the Waratahs, the 'Tahs or the florists) are an Australian rugby union football team, representing the majority of New South Wales in the Super 15 (formerly Super 14) Super Rugby competition. The Riverina and other southern parts of the state, are represented by the Brumbies, who are based in Canberra and owned by the ACT and Southern NSW Rugby Union.

The Waratahs has historically been the name for the New South Wales Rugby Union (NSWRU) representative team, and became the name for the New South Wales team when it entered the Super Six, Super 10 and Super 12 competitions. The name and emblem comes from the waratah, the state flower for New South Wales. Their home ground is Sydney Football Stadium at Moore Park in Sydney. The Waratahs are the third most successful Australian Super Rugby franchise, behind the Brumbies (2 championships) and the Reds (3 championship).

The NSWRU (or then, The Southern RU – SRU) was established in 1874, and the very first club competition took place that year. By 1880 the SRU had over 100 clubs in its governance in the metropolitan area. In 1882 the first New South Wales team was selected to play Queensland in a two-match series. NSW would go onto win both the games. That same year the first NSW touring squad was selected to go and play in New Zealand.

During World War I, the NSW (and QLD) Rugby Unions ceased senior competition. The Queensland body however would not reform until 1929, which saw NSW have more responsibilities for Australian rugby. In 1921 the Waratahs toured New Zealand again, and out of their 10 fixtures, won nine games, including the Test.

The most famous Waratah team was the 1927/28 Waratahs who toured the United Kingdom, France and North America, introducing a style of open, running rugby never seen before, but which has been the stamp of the Australian game ever since. They won 24 and drew two of their 31 official matches. Seven members of this 1927/8 side were from the Drummoyne Rugby Club.[2] Upon returning home, were greeted with a parade through Sydney and a reception at Town Hall. Matches against Queensland would soon resume also.

The 1930s were a particularly successful time for NSW. The height of the success of NSW is best represented by the defeat of the South African Springboks in 1937 at the SCG. NSW Rugby Union would also perform strongly throughout the following decades as well, which included the emergence of footballers such as Trevor Allan, David Brockhoff, Tony Miller, Nick Shehadie, Eddie Stapleton, Ken Catchpole, John Thornett, Peter Crittle and Ron Graham.

In 1963 the Sydney Rugby Union was established for the growth of the game in the city area. The NSW Rugby Union would celebrate its 100th anniversary in 1974. As part of the anniversary celebrations, a match was played at the SCG on 18 May against the All Blacks, though the Waratahs lost nil to 20. 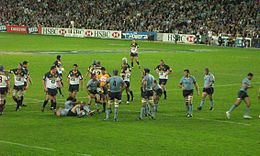 In their inaugural Super 12 season of 1996, the Waratahs won just under half of their games, finishing mid table, with the two other Australian teams finishing above them. The following season of 1997 saw the Waratahs end in a 9th place, winning four fixtures.

In the 1998 season the Waratahs won a best six out of 11 games, ending up in 6th position on the ladder at the end of the season, despite obvious improvements the team had still yet to make a finals appearance. The Waratahs won four fixtures the next season. They won five games in the 2000 season and the 'Tahs finished their season in 9th place.

In 2001 the Waratahs won the same amount of games as the 2000 season but finished, still out of reach of finals contention, in 8th position. 2002 was a record breaking season for the Waratahs, as the team won eight out of their 11 season games and finished in second place behind the Crusaders – making the semis. However in the final game of the regular season the Waratahs lost 96–19 (a Super Rugby record). They were defeated by their Australian rivals the Brumbies, 51–10, in the Waratahs' first ever semi-final. The combined score over the two weeks was Brumbies/Crusaders 147 v. Waratahs 29.

In the 2003 season the Waratahs missed a place in the finals, finishing in 6th position on the ladder at the end of the regular season. In 2004 the Waratahs made a promising start to their season with three straight wins. The team finished 8th on the Super 12 table, six points out of the finals. That year coach Ewen McKenzie re-introduced the end of season tour, taking place in Argentina that year. In 2005, they had their best regular season, finishing second in the table, before losing to the Crusaders in the 2005 Super 12 Final.

The Waratahs finished 3rd on the regular season table for the 2006 Super 14 season, in which two new teams entered the expanded tournament, the Force and Central Cheetahs. In the last home match of the regular season, the Waratahs hosted the Hurricanes, which they lost 14 to 29. The news that star league recruit Wendell Sailor had tested positive to an illegal substance and thus faced a career ending ban from the game was an unwelcome intrusion on the Waratahs semifinal build up. The following week, the semi-finals, they again faced the Hurricanes, though away in Wellington. The Waratahs made their exit, losing 16 to 14. Wendell Sailor later received a two year ban from the game, marring a season that had promised so much.[3]

The 2007 Super 14 season was the most disappointing for the team and its supporters with the Waratahs winning only two games against the lions and the wooden spoon winning reds gaining a final placing of 13th out of 14 (incorrect, the Waratahs beat the Hurricanes in Wellington in their final game of the season). Despite the poor performance the 2007 season saw the emergence of teenage rugby prodigy Kurtley Beale and proved to be a rebuilding stage in the waratahs super 14 championship run.

The 2008 season for the NSW Waratahs begun well with solid pre-season wins and a solid opening game victory against the Hurricanes 20–3 The round 4 victory over the Brumbies marked NSW's 500th victory since their first match in 1882. After starting the season in a slow but solid manner the 'Tahs began to play their best rugby in their mid season match with the blues scoring their first four try bonus point of the season, the Waratahs then continued on a roll finishing their home season with an impressive 4 try bonus point win against title front runners the Sharks improving to second place on the ladder. An average South African trip saw the team slip to third on the ladder after notching only 3 competition points after losing to the Bulls (7 or less BP) and a satisfactory draw against other title contenders the Stormers. The Waratahs faced the Reds in the final round with a win securing second place and a home semi-final win over the Sharks moved them up to their first Super 14 final against the Crusaders which they lost by 12–20.

The New South Wales Waratahs play in a sky blue jersey and navy blue shorts, blue having a long sporting association with the state and a famous rivalry with the red/maroon colour of Queensland. Long time sponsors HSBC feature on the front of the jersey. An alternative white strip is also used. In pre-season of 2006, the Waratahs donned a New Jersey scheme in a trial game against the Crusaders. This system saw traditional rugby playing numbers on the back of jerseys replaced with the initials of the player. The current jersey is made by Canterbury of New Zealand (with the manufacturers logo covered until 2010) and is Cambridge blue, with the alternate strip being white with navy piping.

The Waratahs play at Sydney Football Stadium, which is in Sydney's Moore Park, adjacent to the Sydney Cricket Ground. The capacity for the stadium is 45,500. The Waratahs share the ground with Sydney FC and the Sydney Roosters.

In 2009, the Waratahs signed a multi-million dollar deal with ANZ Stadium which will see them play at least one game per season at the Sydney Olympic Park stadium until 2015.[4] All Waratah home finals matches are also played at the 83,500 capacity stadium.

As well as Sydney Football Stadium, the Waratahs have on occasion played fixtures at other stadiums throughout the state. During the Australian Provincial Championship, in which the Waratahs had two fixtures, the games were taken to the Central Coast Stadium in Gosford, and the other to Bathurst. The Waratahs also played a trial match at Campbelltown Stadium in early 2008.