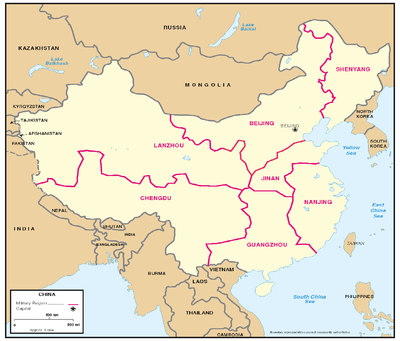 The People's Liberation Army uses a system of military regions, of which there used to be eleven, but are now seven:

The military regions are divided into military districts, usually contiguous with provinces, and military sub-districts.

Originally thirteen military regions were established in the 1950s, but the number was reduced to eleven in the late 1960s. The resulting eleven military regions - Shenyang, Beijing, Lanzhou, Xinjiang, Jinan, Nanjing, Fuzhou, Guangzhou (including Hainan Island), Wuhan, Chengdu, and Kunming - were reduced to seven by 1985-88. The active ones now include Lanzhou, incorporating the former Urumqi MR, Chengdu Military Region, incorporating the former Kunming MR, Nanjing, which includes the former Fuzhou MR, Beijing, and Shenyang.

Finally Guangzhou and Jinan Military Regions both appear to include parts of the former Wuhan MR.