In 1727, Charles Calvert, 5th Lord Baltimore (then governor of the Maryland Colony) awarded a land grant for present day Mount Pleasant to James Holmead. This estate also included the present-day Adams Morgan, Columbia Heights, and Pleasant Plains neighborhoods. James's son, Anthony, inherited the estate in 1750 and named it Pleasant Plains. After the United States Congress created the District of Columbia in 1791, Pleasant Plains estate became part of Washington County, a section of the District lying between what now is Florida Avenue and the Maryland border. The Holmeads began selling tracts of the Pleasant Plains estate until they had sold everything. Today, the family name is preserved in Holmead Place, a short street located west of Thirteenth Street between Spring and Park Roads NW, in what now is Columbia Heights. During 1794 and 1796 Robert Peter, Georgetown's pioneer businessman, conducted title descriptions and maps were created for tracts of some of his land in Mount Pleasant for transactions with commissioners of the city.[2]

During the Civil War, New England native Samuel P. Brown purchased 73 acres (300,000 m2) of land between Fourteenth and Seventeenth Streets, NW. Brown built a house and allowed a wartime hospital to be constructed on his land. After the War, he began selling his land in parcels. He named the area, Mount Pleasant Village, because it contained the land having the highest elevation of the original Pleasant Plains estate. Brown sold all his land except for the parcel he retained around his house at 3351 Mount Pleasant Street, NW.[3] His house was demolished in the 1890s. 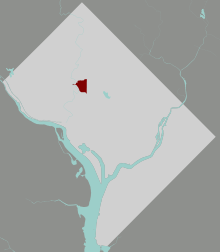 Map of Washington, D.C., with Mount Pleasant highlighted in maroon.

Most of the original settlers built wooden frame houses and farmed their tracts, growing their own food. Stores and other businesses opened around what today is the intersection of Fourteenth Street and Park Road, NW. Settlers laid out early roads in the area, such as Adams Mill Road, Mount Pleasant Street, Newton Street, and Park Road to follow local custom and to accommodate local needs and land ownership. Although Mount Pleasant was within the District of Columbia, it was separated from the city of Washington by vacant land and was rural by comparison. Because of this separate development, the Mount Pleasant street grid is distinct from Washington's cartesian grid and now that the two are part of a single urban fabric, some of its streets appear to have been laid out haphazardly, with several intersecting city streets at odd or severe angles to the greater design.

In the 1870s, a horse-drawn streetcar began traveling from the Fourteenth and Park intersection to downtown Washington City, creating the first streetcar suburb in the District of Columbia. Mount Pleasant ceased to be an independent and separate place in 1878 after the city's boundaries became coterminous with those of the District. Mount Pleasant developed rapidly as a streetcar suburb after the opening of the streetcar line around 1900. Many houses and apartment buildings were constructed between 1900 and 1925. In 1925, the District built the Mount Pleasant Library funded by Andrew Carnegie to serve the growing affluent community. 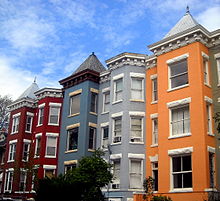 The streets were lined with tall trees that created a continuous canopy of shade. Gardens of ivy, shrubs, and flowering plants were created in the successive terraces from the streets to the base of the stairs of the typical front porches. Landings in the staircases through the terraces were marked with fountains and sculpture. Houses were built adjacent to each other, as row houses. Alleys between all streets provided access for servants and services. Fences separated properties into back yards with vegetable gardens, fruit trees, barns and garages. Many houses were constructed with two levels of cellars below the entry level from the main street, but all having disguised access for landscape equipment through the cellars under the house. Rear sleeping porches extended from the floors with bedrooms.

The neighborhood entered a period of transition in the 1960s. Mount Pleasant was racially segregated as were most neighborhoods of Washington, D.C. at the time. When an African American Howard University professor moved into a prestigious Park Road home, some white residents began to leave the neighborhood. This form of suburbanization, often referred to as White flight, increased after the 1968 riots. Neglect affected many properties and most of the characteristic landscaping was lost, including the canopy of shade trees.

Spanish speaking immigrants also began settling in Mount Pleasant in the 1960s, many from El Salvador and the Dominican Republic. Businesses catering to Hispanics and Latinos developed along commercial portions of Mount Pleasant Street.

Affluent professionals began returning to the neighborhood in the early 1980s. According to the Washingtonian magazine, housing prices rose nearly as fast as any area of metropolitan Washington. Many homes were renovated and some projects were featured in local and national magazines. A one million dollar "green" renovation was featured in a National Public Radio story.

In 1991, an incident between a police officer and a Latino led to rioting along Mount Pleasant Street. As a result, the Metropolitan Police Department began an outreach effort to the Latino population. Since then, many Latino immigrants have moved to more affordable D.C. neighborhoods east of Mount Pleasant and to more distant suburbs.

The western four-fifths of the Mount Pleasant area is a largely wooded residential enclave bounded on two sides by Rock Creek Park. Structures in this area are primarily row houses, with some subdivided into one or two apartments. A few of the original nineteenth century wood-frame houses remain, mostly north of Park Road. The eastern border of Mount Pleasant, along Sixteenth and Mount Pleasant Streets, is marked by mid-rise apartment buildings. These buildings offer rental apartments, condominium and cooperatives. There is a four-block commercial corridor with convenience shopping in the neighborhood along Mount Pleasant Street. In 2008, a large retail development was completed in Columbia Heights, just east of Mount Pleasant. 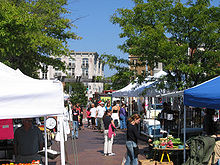 Also evident is the transition of this neighborhood from one of modest to fairly high incomes, an example of gentrification. The 2005-2009 income datum is an American Community Survey estimate:

A series of "Heritage Trail" historical markers have been installed in Mt. Pleasant. The markers, which may be followed as a walking tour, consist of 17 poster-sized street signs featuring narrative, photographs and maps.[7]

The markers are captioned as follows, at these locations: