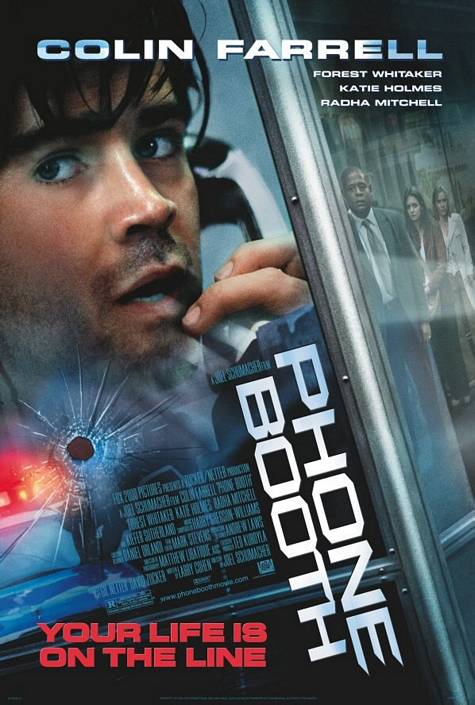 The principal photography on the film was completed in 10 days, with an additional 2 days of establishing shots, pick-ups and re-shoots. The film is set in real-time, so the timespan in which the film takes place is as long as it takes to watch it, much like the "24", which also stars . Like "24", it also uses split screens.

Even though the film is set in , it was filmed in downtown (at Fifth Street, between Broadway Street and Spring Street). This is made evident by the LACMTA buses periodically driving by.

originally pitched the concept of a film that takes place entirely within a phone booth to in the 1960s. Hitchcock liked the idea, but he and Cohen were unable to figure out a plot reason for keeping the film confined to a booth and hence Hitchcock never made the idea into a film. Cohen picked the idea up again in the late 1990s when the idea of the sniper came to him.

The narrator begins by mentioning all the phone calls made every day. Enter Stu Shepard (Farrell), an arrogant, selfish, foul-mouthed and dishonest , who contemplates cheating on his wife Kelly (Mitchell). Every day after work he calls Pam (Holmes), a young actress whom Stu fancies, and only pretends to be making a star out of, from the phone booth on the corner of 53rd Street and Eighth Avenue. When a guy tries to deliver a pizza to the booth Stu rudely dismisses him.

Stu calls Pam, and says that he'd love to introduce her to some important people but is told she doesn't have time. After the phone call, the phone rings and Stu answers it.

The caller is a man (Sutherland) who says that he should've accepted the pizza, and also that he should not leave the booth. When Stu asks who it is, the man says "Someone who enjoys watching you". Stu soon realizes that the man he's talking to can see him and looks around the many windows surrounding him. The man says that he'll say hi to his wife Kelly for him, then hangs up. The man soon calls back to tell Stu that he must tell Kelly and Pam the truth; that he's cheating. The man calls Pam and puts Stu on speaker phone, and tells her that Stu is married, that he doesn't want anything with Pam except to sleep with her. He then tells Stu to call his wife and tell "her" the truth. An angry Stu does so. Kelly says that a guy just called to say Stu would call her from a booth to tell her something important and Stu is distracted by three who want to use the phone. He becomes so confused that he finally hangs up on his wife and yells to the dancers. He then tells the man he's had enough&mdash;and is told that if he hangs up, the man will shoot him. Stu doesn't believe him, but is convinced when the man cocks his gun. Stu gets scared, warning him that if he shoots the cops will arrive. However, the sniper proves him to be wrong by shooting a toy robot next to the booth without anyone noticing because, as is said explicitly later, he has a silencer.

The situation escalates when the prostitutes get their , Leon to approach the booth and try to ask Stu nicely to leave, but the terrified Stu refuses. The impasse between the two escalates to the point of Leon breaking into the booth with a bat and attacking Stu. The sniper tells Stu he can help and Stu says 'yes' thinking he is answering another question. Leon is shot in the back by the sniper and shortly after dying the police arrive and Stu is instantly the suspect. Captain Ed Ramey (Whitaker) tries to negotiate with Stu but he replies 'It's an important call'. Ramey then asks him who he's talking to, and Stu answers "My ". The press arrives and the sniper says that Stu should be glad for all the attention he's getting.

Kelly arrives and the sniper makes him confess to her about his infidelity. Pam then shows up and the sniper says that one of them can take the other's place but Stu pleads with the sniper and manages to secretly inform Captain Ramey of his situation using his cellphone. Soon Stu confesses his bad character to the crowd, the sniper points out that he did not order Stu to do this to which Stu replies that he didn't do it for the sniper.The police finally track down the sniper by tracing the call the sniper made to Kelly, and Ramey tells Stu through a cryptic message that they have done so. Stu triumphantly informs the sniper that the cops are coming to kill him and the sniper chooses to take Kelly with him, but Stu takes a gun planted in the ceiling by the sniper, runs out of the booth and yells "it's me you want!". A cop shoots him with a at the same time as the police officers reach the hotel room where the sniper is. There they find the corpse of the pizza guy. The audience is led to believe that this was the sniper all along and has committed when he heard the cops coming.

When Stu is falling asleep in an minutes later due to a dose, however, a man in a coat walks up to him, says that he's sorry for the pizza guy, and warns Stu that if his new-found honesty does not last, he'll be hearing from him again. He, then, walks away from the scene as a voice over repeats his first words to Stu: "Isn't it funny - you hear a phone ringing and it could be anybody. But a ringing phone has to be answered, doesn't it?"

The film ends with the sound of another phone ringing, followed by a man answering, "Hello?".