Bring Me the Horizon

Bring Me the Horizon

Bring Me the Horizon are a British metalcore band from Sheffield, Yorkshire, who formed in 2004. Bring Me the Horizon constits of Oliver Sykes as the lead vocalist, lead guitarist Lee Malia, rhythm guitarist Jona Weinhofen, bassist Matt Kean and drummer Matt Nicholls. They are currently signed to Visible Noise Records in the UK, Epitaph Records in the US and to Shock Records in Australia. Their music has been said to be influenced diversely by grindcore, death metal and emo,[1] and their earlier work is noted for its strong influence from American metalcore bands.[2] They have released three studio albums and one extended play.

They released their debut album Count Your Blessings on 30 October 2006. Their second album, Suicide Season was released 29 September 2008 with a two disc special edition version titled: Suicide Season: Cut Up!, featuring a second disc of electronic and dubstep remixes of tracks featured on Suicide Season. Prior to the release of the special edition of Suicide Season, founding rhythm guitarist Curtis Ward left the band due musical differences and commitment issues.[3] He was later replaced with Jona Weinhofen. Their third studio album There Is a Hell, Believe Me I've Seen It. There Is a Heaven, Let's Keep It a Secret was released 4 October 2010.

The band formed in March 2004 after all the founding members, who had all been a part of several local and separately defunct bands, had decided to come together and form a new band.[2] In the months after there formation Bring Me the horizon created a demo album, titled: "Bedroom Sessions". Their name is derived from the last line of the film Pirates of the Caribbean: The Curse of the Black Pearl, in which Captain Jack Sparrow says "Now... Bring me that horizon."[1][4]

Bring Me the Horizon signed to Thirty Days of Night Records in 2004. Being the first band to sign to the label. Bring Me the Horizon released their first Extended Play This Is What the Edge of Your Seat Was Made For on 2 October 2004. The EP was re-release 30 January 2005 through Visible Noise.[2] The re-release of the EP gained the band a significant amount of attention, peaking at 41 on the UK album charts.[5]

They released their debut album Count Your Blessings in October 2006 in the United Kingdom and in August 2007 in the United States. Across late November and December 2006 Bring Me the Horizon accompanied Lostprophets and The Blackout in a UK tour.[6] In January 2007 Bring Me the horizon replaced Bury Your Dead on Killswitch Engage's European headline tour. The slot as a support was offered as Bury Your Dead withdrew from the tour because of there vocalist, Mat Bruso, leaving the band.[7] 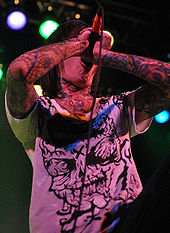 Bring Me the Horizon recorded their second studio album Suicide Season in Sweden with Fredrik Nordström. In promotion of the new material from Suicide Season the band embarked on their first headline tour of the United States, as well as appearing in the 2008 Warped Tour. In May 2008 Bring Me the Horizon was the main supporting band on I Killed The Prom Queen's farewell tour in Australia with The Ghost Inside and The Red Shore as supports.[8] Although the tour was short and was only 9 days long it sold out rapidly.[9] On 18 September 2008 Suicide season was released in the United States on Epitaph and 29 September in Europe through Visible Noise, it was promoted using the tagline "September is Suicide Season".[10]

In 2009 Bring Me the Horizon was at 2009 Kerrang! Tour alongside Black Tide, Dir en grey, In Case of Fire and Mindless Self Indulgence.[11] They also joined Thursday, Cancer Bats, Four Year Strong and Pierce the Veil on the North American leg of Taste of Chaos 2009 across February to April. In March 2009 during the Taste of Chaos tour, guitarist Curtis Ward left the band.[3] Australian guitarist Jona Weinhofen, formerly of Bleeding Through and I Killed The Prom Queen, temporarily replaced Curtis before being asked to join the group on a permanent basis.[12] A video of a staged fight between Oliver Sykes and Architects' lead singer Sam Carter, filmed in October 2009 and uploaded to YouTube, caused some Bring Me the Horizon fans to send hate mail to Carter. Carter later made it clear in an interview with Kerrang! that the whole thing was a joke, as did Sykes.[13]

In November 2009 Bring Me the Horizon released a remixed version of Suicide Season, titled Suicide Season: Cut Up!. Musicians and producers featured on the album include Ben Weinman, Sonny Moore, L’Amour La Morgue, Utah Saints and Shawn Crahan.[14] That year Sykes guested on the Admiral's Arms song "Dawn of the New Age", which appeared on the EP "Stories Are Told", released in November 2009.

The band's third album and first with their new rhythm guitarist Jona Weinhofen, titled: There Is a Hell, Believe Me I've Seen It. There Is a Heaven, Let's Keep It a Secret was released 4 October 2010 and debuted at number 17 on the Billboard 200 in the US,[15] number 13 on the UK Album Chart,[16] and number 1 on the Australian Albums Chart,[17] the UK Rock Chart[18] and the UK Indie Chart.[19] Despite reaching number 1 in Australia, the album's sales of 3,600 they gained to get there, is the lowest in the history of the ARIA charts.[20] In 2010 members of Bring Me the Horizon (Jona Weinhofen, Lee Malia and Oli Sykes) guested on This One's For You by Australian rapcore band Deez Nuts (Sykes providing vocals on "If You Don't Know Now You Know"). Five singles total were released from the album including: It Never Ends, Anthem, Blessed with a Curse, Visions, and Alligator Blood, with music videos included for each of the songs. In the imediate promotion of the album the band embarked on a headline tour in intimate venues across the United Kingdom with support from Cancer Bats and Tek-one.[21]

In April 2011 Bring me the Horizon started a European tour, starting in the United Kingdom they toured with Parkway Drive and Architects as main support bands; with The Devil Wears Prada as the opening support for the UK and Dubstep group Tek-one opening for the remainder of Continental Europe. The tour gain much publicity, it's classed as their biggest headline tour ever [22] and even being stated as the "tour of the year" by Rock Sound.[23] The tour however was not without it's hinderences. on 28 April, Matt Nicholls broke his Arm whilst playing football with members of Bring Me the Horizon, Parkway Drive and Architecs members, and instead of canceling the tour Architects' drummer Dan Searle filled in as the drummer, this meant that Bring Me the Horizon's setlist was halved in length.[22] An also on 28 April at the Bristol O2 Academy ,there was a power cut before Parkway Drive's set.[24] Bring Me the Horizon as a reaction to the power cut decided to do a short 4 track acoustic set featuring: The Sadness Will Never End , It Never Ends, Suicide Season and Chelsea Smile.[25] The tour was extended with a North American leg from 31 August to 4 October maintaing Parkway Drive and Architects and including Deez Nuts onto the line up.[26] On 23 August, they released the fourth music video and single, "Visions." [27] On October 31st, Halloween, the next music video for the song "Alligator Blood" was released.

In December Machine Head have planned to do a arena tour across europe with Bring Me the Horizon as the main support band as well as Devil Driver and Darkest Hour as supports. Oliver Sykes has stated that these will be the last European dates they'll do before they start the writing and the recording of their fourth album.[28]

While on tour in the UK allegations were made against vocalist Oliver Sykes that he urinated upon a female fan after a gig at Nottingham Rock City. Sykes was subsequently charged with urinating on the fan.[29] Online music zine Drowned In Sound claimed that Bring Me The Horizon were banned from Nottingham Rock City,[30] a claim that turned out to be false when the band subsequently played Nottingham Rock City on 1 December 2007.[31] All charges against Sykes were later dropped.[32]