Maurice Herbert Evans (3 June 1901 – 12 March 1989) was an English actor noted for his interpretations of Shakespearean characters. In terms of his screen roles, he is probably best known as Dr. Zaius in Planet of the Apes and as Samantha Stephens' father Maurice in Bewitched.

Evans was born in Dorchester, England to Laura Turner and Alfred Herbert Evans, an analytical chemist.[1] He first appeared on the stage in 1926 at the Cambridge Festival Theatre and joined the Old Vic Company in 1934, playing Hamlet, Richard II and Iago.

He was selected by Terence Gray to appear in the opening production in November 1926 at the Festival Theatre taking the part of Orestes in two parts of the sensational production of the Oresteia of Aeschylus. This was followed by Lord Belvoir in The Man who ate the Popomack by W.J. Turner, Saint Anthony in Maeterlinck's The Miracle of Saint Anthony. Then in 1927 a poet in The Pleasure Garden by Beatrice Mayor followed by Young Man in On Baile's Strand by W.B. Yeats, Midir in The Immortal Hour by Fiona Macleod, the Hon. Algernon Moodie in The Rumour by C.K. Munro, Mark Ingestire in Sweeney Todd by Dibdin Pitt, the poet in The Lost Silk Hat by Lord Dunsany, the Captain in Androcles and the Lion by George Bernard Shaw, Mister Four and Young Man in The Adding Machine by Elmer Rice, Don Juan in the play of the same title by J. Elroy Flecker, two parts in Terence Gray's own play The Red Nights of the Tcheka, the Stage Manager in The Player Queen also by W.B. Yeats, the Second Engineer in The Insect Play by the Capek brothers, Prince Kamose in another Gray play called And in the Tomb, and finally in June 1927 Don Pelegari in Pirandello's Each in his own way.Both Yeats and Shaw attended performances of their own plays.

His first appearance on Broadway was in Romeo and Juliet opposite Katharine Cornell in 1936, but he made his biggest impact in Shakespeare's Richard II, a production whose unexpected success was the surprise of the 1937 theatre season and allowed Evans to play Hamlet (1938) (the first time that the play was performed uncut on the New York stage), Falstaff in Henry IV, Part I (1939), Macbeth (1941), and Malvolio in Twelfth Night (1942) opposite the Viola of Helen Hayes, all under the direction of Margaret Webster. He also starred opposite Cornell in the 1935 production of George Bernard Shaw's "St. Joan." 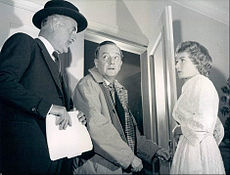 Evans reprised his Broadway role in Dial M for Murder for a 1958 Hallmark Hall of Fame television presentation. Also pictured are John Williams and Rosemary Harris.

When World War II began, he was in charge of an Army Entertainment Section in the Central Pacific and played his famous "G.I. version" of Hamlet that cut the text of the play to make the eponymous title character more appealing to the troops, an interpretation so popular that he later took it to Broadway in 1945. He then shifted his attention to the works of Shaw, notably as John Tanner in Man and Superman and as King Magnus in The Apple Cart. In 1952 he starred as the murderous husband in the original stage-play version of Dial M for Murder. He was also a successful Broadway producer of productions in which he did not appear, notably Teahouse of the August Moon.

American television audiences of the 1960s will remember Evans as Samantha's father, Maurice, on the sitcom Bewitched. His real-life insistence that his first name was pronounced the same as the name "Morris" was ironically at odds with his Bewitched character's contrasting stance that it be pronounced "Maw-REESE". Evans also appeared in the fourth season of Daniel Boone starring Fess Parker playing a French impressario "Beaumarchais." He also played the "Puzzler" on Batman.

Evans had great impact onscreen as well. He played a diabolical villain in 1951's Kind Lady, co-starring Ethel Barrymore and Angela Lansbury. Evans appeared memorably in two 1968 films: as the evolved orangutan, Dr. Zaius in Planet of the Apes (and the 1970 sequel Beneath the Planet of the Apes) and as the doomed "Hutch", who attempts to warn his friend, the title character, Rosemary Woodhouse, in the thriller Rosemary's Baby, of the true Satanic nature of her neighbors, Roman and Minnie Castavet (played by Sidney Blackmer and Ruth Gordon).

Evans appeared in more American television productions of Shakespeare than any other actor. Beginning in 1953, for the famous television anthology, Hallmark Hall of Fame, he starred in the first feature-length (i.e., longer than an hour) dramatizations of the plays to ever be presented on American television. They were:

In bringing so much Shakespeare to American television in such a short span of time (between 1953 and 1960), he was a true pioneer. This had never been tried before - at least, not in the U.S. Evans firmly believed that it was an actor's job to "lead public taste, not to play to public taste".[3] Evans also brought his Shakespeare productions to Broadway many times, playing Hamlet on the Great White Way in four separate productions for a record grand total of 283 performances. He and Judith Anderson also starred on Broadway several times in Macbeth. Their portrayals were once regarded as the definitive portrayals of these characters.

Not only did Evans appear on Broadway as Hamlet four times, but the productions of the play that he appeared in were consecutive revivals of it - no other actor played Hamlet on Broadway between 1938, when Evans first played him there, and 1946, which marked Evans's last Broadway Hamlet. He is very likely the only actor to have accomplished this, so far.[4][5][6][7]

At the end of the 1960s, Evans returned to England. Aside from an infrequent trip to the United States and occasional visits to retired actors in financial need (as a representative of the Actors Fund, of which he was a longtime trustee), he lived quietly in the Sussex countryside, near Brighton.[8]

Never married, he was survived by a brother, Hugh, of London.

Maurice Evans died of heart failure as a result of a bronchial infection, at aged 87 in Rottingdean, East Sussex, England, although some sources, such as IMDb, cite cancer as the cause of death.