The Eyes of the Dragon

The Eyes of the Dragon

The Eyes of the Dragon is a novel by Stephen King published in 1987. Previously, it was published as a limited edition hardcover by Philtrum Press in 1984. The mass-market version had been slightly revised for publication. At the time it was a surprising deviation from the norm for King, who is best known for his horror fiction. This book is a work of classic fantasy, with a clearly established battle between good and evil, with magic playing a lead role. 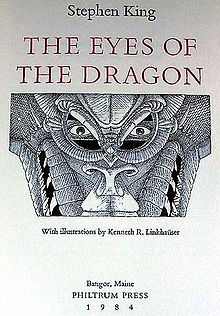 The Eyes of the Dragon takes place entirely within the realm of Delain (which itself is located within In-World from The Dark Tower series). It is told from the perspective of an unnamed story-teller, who speaks casually and frankly to the reader, frequently adding his own commentary on characters' motivations and the like. At the beginning, Flagg secretly attempts to assassinate Queen Sasha. He finally succeeds in forcing the Queen's maid to cut the queen while she was giving birth to Thomas, her second child, making her bleed to death. As time passes, and Peter, the older brother, grows older, it becomes more obvious to Flagg that the Crown Prince is a far greater threat to his position as royal wizard than was Sasha. Therefore Flagg has King Roland poisoned and Peter framed for the murder. Thomas witnesses this through the glass eyes of the mounted head of Roland's greatest trophy, the dragon. After a brief trial, during which the judge decides Peter is guilty, he is locked up in the enormous tower called the Needle in the center of the city. Thomas is then crowned King, although he is only twelve years old; due to his youth and his fearful inexperience, he allows Flagg enormous amounts of power. At the start of his long stay in the Needle, Peter manages to send a note to the judge who convicted him, Anders Peyna, with instructions by which to help rescue him. Peter escapes, with the help of his mother's dollhouse, and napkins which he asked for. After the escape he and his allies rush to get Roland’s bow and arrow. However, it is not to be found because Thomas had it once they got into the king's "sitting room". Flagg, now revealed as a demonic being, is about to kill them when Thomas reveals himself and tells Flagg that he (Thomas) watched Flagg poison Roland. Thomas shoots Flagg in the eye, but Flagg uses magic to disappear and escape. At the end of the novel, Peter is declared to be the rightful king. Thomas, who has become deeply hated in Delain, sets off alongside his butler Dennis to find Flagg. They find him and they confront him, but the outcome is never told. 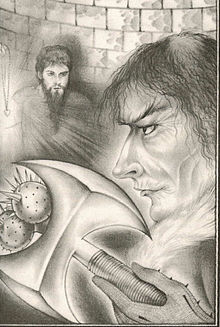 Flagg (pictured right) with King Peter from Eyes of the Dragon. Art by David Palladini.

Approximately ten years ago The Eyes of the Dragon was optioned by a French company but the option lapsed.[citation needed]