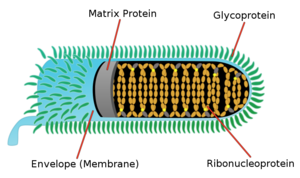 Lyssavirus (from a word meaning "frenzy") is a genus of es belonging to the family "", in the order "".

This group of es includes the "" traditionally associated with the disease.

The structure consists of a spiked outer envelope, a middle region consisting of protein M, and an inner ribonucleocapsid complex region, consisting of the genome associated with other proteins.

Based on recent evidence, Lyssaviruses are categorized into seven major s. In addition, there have been four genotypes recently discovered, and these are West Caucasian Bat virus, Aravan Virus, Khujand virus, and Irkut virus. The major genotypes include (genotype 1), (2), (3), Duvenhage virus (4), European Bat lyssaviruses 1 and 2 (5 and 6), and (7). Based on biological properties of the es, these genotypes are further subdivided into phylogroups 1 and 2. Phylogroup 1 includes genotypes 1, 4, 5, 6, and 7, while phylogroup 2 includes genotypes 2 and 3. The nucleocapsid region of lyssavirus is fairly highly conserved from genotype to genotype across both phylogroups; however, experimental data has shown that lyssavirus strains used in vaccinations are only from the first genotype of the first phylogroup.

Genotype 1, classic , is prevalent throughout the world and can be carried by domesticated or wild animals. The other genotypes (types 2 through 7) have much less diversity in carriers. Only select hosts can carry each of the genotypes. Also, these other genotypes are particular only to a specific geographic area.Bats are known to be an animal vector for all but one of the seven genotypes, the one being Mokola virus.