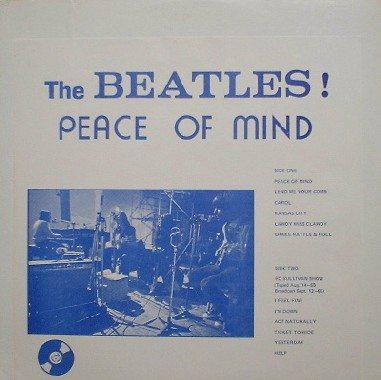 The song begins with backward humming and distinct voices singing "La La's" until a single guitar is introduced, joined by a second picking a pattern similar to "" with a single-note bass line.

The three-part harmonies that ensue are a sound-alike Lennon (as the main voice) along with Harrison (and possibly or ) adding supporting lines. The tape is varispeeded up by a single tone as the song progresses. After the main lyric is sung, followed by a little guitar lead and some more backwards speech, the cut is varispeeded again through its coda, with humming in the fade out.

While considered by many to be a "fake take", many others remain convinced it's a Lennon home demo, reminiscent in sound and lyrical content of the Beatles' psychedelic songs from the Sgt. Peppers/White Album era, in particular "", "" and "".

It has since been released many times on bootlegs as an unreleased Beatles take and was considered a convincing demo from the start. Whether from 1966 or 1967, its guitar work predated "Dear Prudence" from the 1968 White Album of songs written in India, but it also features the same Lennon guitar style. Detractors claim this proves it isn't Lennon because the singer Donovan had taught John that picking style while in India, and the result was "Dear Prudence".

If it is, in fact, an unreleased Beatles song, Lennon probably cut the demo in England, with , the presumed cowriter (possibly with Paul and Yoko contributing) via the use of Lennon's Brennells tape recorder. Why an apparent Lennon demo like this isn't listed in the Lost Lennon tapes catalog is, like its origins, unknown. The demo might have evolved from one of many experimental (though often unrecorded or unreleased) McCartney creative musical projects from the era, an attempt at Paul's single-cord experiment, initially called "the Void", which was a musical project that Beatles producer discouraged Paul from pursuing.

Many experts on unreleased Beatles music are unconvinced, notably Doug Sulpy, whose "The 910's Guide to The Beatles' Outtakes" omits it. Still, the prospect of finding a genuine lost Beatles demo is so appealing, the song has a natural draw and a large following among fans and critics alike.

Once considered a product of the late , founding member of (a notion later denied by Syd Fact|date=January 2007), others contend POM/TCB is the work of the (a.k.a. ) or even possibly an unknown "talent" who submitted an unsolicited tape to Apple, a demo later tossed away with the thousands of other unsolicited submissions at Apple that flooded in after the Beatles invited the world at large to submit their work.

Oddly enough, as no one has claimed ownership of the POM demo nor claimed a copyright over it, the song is available in the public domain as a free download.

"Peace of Mind" (Lennon/Harrison or Anonymous)

I'm looking at the candle burns a flame to meet the sky.
I leave the candle laughing. I turn my face to cry.
A safety pin returns my smile, I nod a brief hello,
while you are building molecules with your garden hoe.

Why can't this last forever, these things repressed inside?
One feels it almost instantly unless one of us died.
It's over, it's done, babe I need it again.
Just please, please (please) ... oh, don't keep me from begin.

I need to hear the colours red and blue and whispered word.
To fly all day and sing in tune and not hear what I heard.
To see you all around me and to take you by the hand
and lead you to a brand new world that lately has been banned.

We'll build things never built before. We'll do things never done.
And just before it's over, it's really just begun.