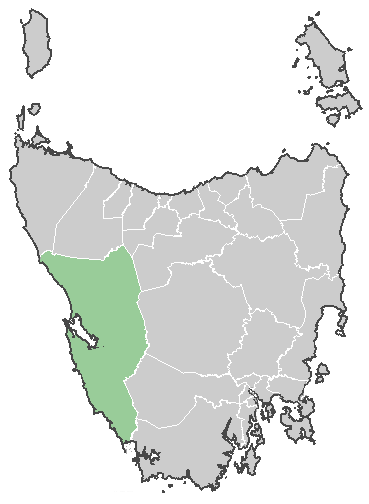 url = http://www.westcoast.tas.gov.au
stategov = Lyons
fedgov = Lyons
near-nw = Circular Head
near-n = Waratah-Wynyard
near-ne = Meander Valley
near-w = ""
near-e = Central Highlands
near-sw = ""
near-s = ""
near-se = Derwent ValleyThe West Coast Council is a Local Government Area of . It covers most of the west of the state. It takes in the West Coast Range as well as portions of areas.It covers the largest area of any Tasmanian municipality. It has a very colourful mining and railway history. It also has a significant history of convict settlement. It has weather conditions that are usually on the extreme list for Tasmania - notably Lake Margaret for rainfall (competing with Tully in Queensland) and Mount Read usually for low temperatures. In Autumn 2006 heavy rainfall recorded at Mount Read was on a par with Lake Margaret records of the past.

It is an amalgamation of the earlier local government bodies that included Gormanston, Queenstown, and Zeehan.

The West Coast region has a natural eastern barrier of the West Coast Range and has the which passes through it to connect with .

Historically the region was more oriented towards the North - due to the main transport being by either rail to up until the 1950s and 1960s, or by ship out of Strahan until the mid twentieth century. There are no land based transport routes to the south. Consequently many residents who could afford shopping trips would go to Melbourne in Victoria, rather than Hobart in Tasmania.

Some of the small population is located in the small cluster of towns near - Strahan and Queenstown, these were linked in their connection with the

While further north Zeehan and Rosebery are settlements that developed from early quite separate mining operations, but were linked by their reliance upon the There a number of ghost towns or abandoned mining communities in the West Coast, with some such as Crotty actually submerged under hydro-electric scheme dams.

The West Coast is known as a popular tourist destination.

The Cruises from Strahan across have been popular, specially since the dispute in the 1980s, as people are able to venture into the edge of the wilderness without any problems.

The West Coast also has extensive industrial and mining heritage. Zeehan has the West Coast Pioneers Museum and Queenstown has the Galley Museum - both of these museums have very comprehensive collections which good perspective on the history of the region.