Mercy
For other uses, see Mercy (disambiguation).
"Merciful" redirects here. For people called "the Merciful", see List of people known as the Merciful. 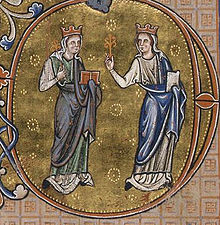 Mercy (Middle English, from Anglo-French merci, from Medieval Latin merced-, merces, from Latin, "price paid, wages", from merc-, merxi "merchandise") is broad term that refers to benevolence, forgiveness and kindness in a variety of ethical, religious, social and legal contexts.[1][2][3][4]

The concept of a "Merciful God" appears in various religions from Christianity to Islam.[1][2] Performing acts of mercy as a component of religious beliefs is also emphasized through actions such as the giving of alms, and care for the sick and Works of Mercy.[5][6]

In the social and legal context, mercy may refer both to compassionate behavior on the part of those in power (e.g. mercy shown by a judge toward a convict), or on the part of a humanitarian third party, e.g., a mission of mercy aiming to treat war victims.[3][4]

One of the basic virtues of chivalry, Christian ethics, Islam, and Judaism, it is also related to concepts of justice and morality in behavior between people.

TIn the Old Testament God is considered "Merciful and Gracious" and is praised for it, e.g. as in Psalms 103 (8). The emphasis on mercy appears in numerous parts of the New Testament, e.g., as in the Beatitudes in Matthew 5:7: "Blessed are the merciful: for they shall obtain mercy".[1] In the Parable of the Prodigal Son (Luke 15:11-32) Jesus describes fatherly mercy as "a gratuitous, generous gift". In Ephesians 2:4 Apostle Paul refers to the mercy of God in terms of salvation: "God, being rich in mercy,... even when we were dead through our sins, made us alive together with Christ".

This devotional element of mercy as part of the Christian tradition was echoed by Saint Augustine who called mercy "ever ancient, ever new".[7][1] The Works of Mercy (seven corporal and seven spiritual works) are part of the Catholic and Eastern Orthodox traditions.[5] 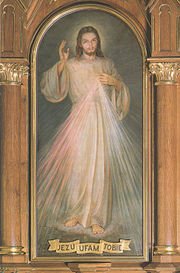 The Catechism of the Catholic Church emphasizes the importance of the Works of Mercy (item 2447) and in Roman Catholic teachings, the mercy of God flows through the work of the Holy Spirit.[5][9] Roman Catholic liturgy includes frequent references to mercy, e.g., as in Kyrie eleison, Christe eleison: Lord have mercy, Christ have mercy.[10]

Pope John Paul II was a follower of the Divine Mercy devotion, due to Saint Mary Faustina Kowalska (1905-1938), who is known as the Apostle of Mercy.[13][12] Pope John Paul II established Divine Mercy Sunday. In his long encyclical Dives in Misericordia (Latin for Rich in Mercy) he examined of the role of mercy — both God's mercy, and also the need for human mercy.[14]

The first World Apostolic Congress on Mercy was held in Rome in April 2008 and was inaugurated by Pope Benedict XVI.[1][17][18]

In Islam the title "Most Merciful" (al-Rahman) is one of the names of Allah and Compassionate (al-Rahim), is the most common name occurring in the Quran. Rahman and Rahim both derive from the root Rahmat, which refers to tenderness and benevolence.[2] As a form of mercy, the giving of alms (zakat) is the fourth of the Five Pillars of Islam and one of the requirements for the faithful.[6]

In the Jewish Bible mercy is one of the outstanding attributes of God. In the central revelation at Sinai is to recognize YAHWEH as "the Lord is a merciful and gracious God, slow to anger, abounding in steadfast love and faithfulness" (2 Exodus 34.6).[19] This is emphasized in the Babylonian exile, "The Lord has comforted his people and is kind to his arms. [...] Can a woman forget her infant, a mother of her womb? And even if they would forget him. I will never forget you "(Isaiah 49,13.15) why is the demand of mercy to the people". It is good to pray and fast, to be merciful and just "(Tobit 12:8).

Other religions and beliefs

Kwan Yin the goddess of mercy and compassion, is one of the best known and most venerated Bodhisattva in Asia.[20]

Karuṇā (often translated as "compassion") is part of the beliefs of both Buddhism and Jainism. Karuṇā is present in all schools of Buddhism and in Jainism it is viewed as one of the reflections of universal friendship. 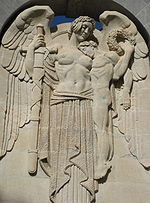 The Spirit of Compassion, commemorating World War I, South Australia, 1931

In a legal sense, a defendant having been found guilty of a capital crime may ask for clemency from being executed.

To be "mercy", the behavior generally can not be compelled by outside forces. A famous literary example that alludes to the impact of the ethical components of the mercy on the legal aspects is from The Merchant of Venice when Portia asks Shylock to show mercy. He asks, "On what compulsion, must I?" She responds:

The quality of mercy is not strained. It droppeth as the gentle rain from heaven Upon the place beneath. It is twice blest: It blesseth him that gives and him that takes.

Ethicist Jacob Appel has noted a decline of mercy, and a concomitant increase in retribution, in American public life. Appel wrote that:

'One of the glaring -- yet too often overlooked -- failings of contemporary America is that we have become a nation obsessed with justice and retribution. We claim to be The Land of the Free, yet we have lost sight of what it means to be imprisoned: denied liberty and access to one's family, subjected to isolation and violence and unspeakable boredom. We have come to believe, in the most pernicious way, that people should get what they deserve. What a sea change it might be in our public discourse and our civic life if we focused instead upon mercy and forgiveness. A merciful and forgiving culture might find itself with less anger, less social disruption, and even less crime.[21]