The word "chalybeate" is derived from the Latin word for steel, "chalybs", which follows from the Greek word "khalups". Khalups is the singular form of Khalubes or Chalybes, who were mythical people living on Mount Ida in north Asia Minor who had invented iron working.

the colic, the melancholy, and the vapours; it made the lean fat, the fat lean; it killed flat worms in the belly, loosened the clammy humours of the body, and dried the over-moist brain.

He also apparently said, in verse:

"These waters youth in age renew
Strength to the weak and sickly add
Give the pale cheek a rosy hue
And cheerful spirits to the sad."

The Recoaro Spa is on the outskirts of Vicenza, Italy. In 1689, a spring of ferruginous water rich in gas and tasting pleasantly was discovered by Count Lelio Piovene of Vicenza. Local residents called the water from this spring "Saint Anthony's miraculous water" because they claimed it had therapeutic properties.

Dr. Anthony Relhan (ca. 1715-1776), promoted the drinking of mineral waters and particularly water from the chalybeate spring in St Anne's Well Gardens, and published A Short History of Brighthelmstone; with Remarks on its Air, an Analysis of its Waters, Particularly of an uncommon Mineral one, long discovered, though but lately used in 1761.[1] This led to a substantial increase in public interest in drinking mineral water. The town of Enfield, New Hampshire, even changed its name temporarily to Relhan because of the profound public interest in this form of therapy.[2][not in citation given]

Princess Victoria, later Queen Victoria, drank the waters every day during her stay in Tunbridge Wells in 1834. She and her mother, the Duchess of Kent, would pay a visit to the spring and then enjoy a stroll along the Pantiles. The water contains a significant level of dissolved mineral salts, with iron and manganese contributing to its characteristic flavour.

An analysis in 1967 showed it to contain (parts per million):

Chalybeate springs are found in: 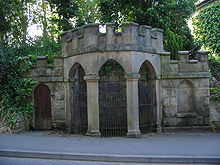 This rather ornate spring well is in the village of Quarndon. A plaque inside the well has the following description "17th century chalybeate spring well. Once famous spa noted for medicinal waters containing iron. Visited by Daniel Defoe in 1727".

Several places throughout the world have taken their name from similar springs, including: