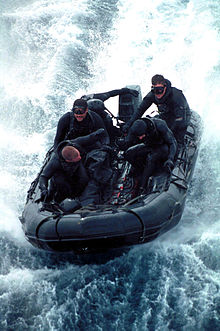 A CRRC manned by U.S. Navy SEALs from SEAL Team 5 during an exercise in 2000.

The F470 Combat Rubber Raiding Craft (CRRC), also known as the "Combat Rubber Reconnaissance Craft," is a specially fabricated rubber inflatable boat often used by United States Navy SEALs and Marines, among others. Though Zodiac Marine & Pool produces a large range of both inflatable and rigid-hulled boats, the name "Zodiac" has become synonymous with the CRRC in popular culture.

The boat can be used for over-the-horizon transportation, inserting lightly armed raiding parties or reconnaissance teams onto beaches, piers, offshore facilities and larger vessels. The CRRC can be inflated in minutes by foot pump, compressor or CO2 tank and can be deployed from shore and a variety of vessels. Additionally, it can be launched from several types of aircraft and submarines equipped with a special lockout chamber. Its chief advantages are light weight, compact size when stowed, and the safety imparted by its super-buoyant nature (which gives it the ability to operate in relatively high seas) stealth, and versatility.

A total of eight individual airtight chambers comprise the F470. The main hull or gunwale contains five intercommunicating chambers, which are separated by internal baffles and valves. This means that a single leak will not result in loss of pressure throughout the boat, and that air can be bled between chambers to compensate for loss in one. Two additional chambers, located below the gunwale on either side and called "speed skags," provide cushioning for the boat's occupants and additional buoyancy in case of pressure loss in the hull. The final chamber is an inflatable keel tube which runs the length of the craft and gives the bottom of the hull a "V" shape, imparting directional stability and additional shock absorption. A wooden "transom" board at the stern provides a mounting point for the outboard engine(s) and a "thrustboard" at the bow keeps the hull from collapsing inward under power.

U.S. Marines from the Battalion Landing Team 2/2 go ashore in a CRRC during a 2003 exercise.

A ready-for-use craft includes an outboard engine (two in some configurations); removable aluminium deckplates or roll-up slatted decking; paddles; a bow line for securing the docked boat and a "righting" line which is used to flip the boat in the event of capsizing. At the bow of the boat are storage bags for equipment (foot pumps, extra lines, etc.) and a special fuel bladder, which can be of either 6- or 18-gallon capacity and which feeds the engine via a flexible hose. Deflated and rolled up, the boat and all necessary equipment can easily fit into the bed of a small pickup. Most military CRRC's use a 55 horsepower (41 kW) two-stroke engine with a pumpjet propulsor, which consists of a shrouded impeller. This design reduces the risk of serious injury to personnel in the water when compared to the traditional open propeller. It also reduces the risk of the propulsion system being seriously damaged by submerged objects.

A specially-trained coxswain sits at the stern (rear) of the boat and controls it via the tiller arm, attached to an outboard engine. The coxswain is considered the commander of the craft and is ultimately responsible for its operation, regardless of whether a senior-ranking individual is on board. Across from him sits the assistant coxswain, who relays hand signals from other boats and aids the coxswain as required. The remaining passengers (six raiders plus the two coxswains make up a full team) normally lay on and straddle the gunwale, keeping a low silhouette to help avoid detection and leaving room on the deck for weapons, equipment and (if necessary) additional fuel bladders.

Because the CRRC offers no protection to its occupants and is itself highly vulnerable to small-arms fire, operations involving it almost always take place at night and depend on the elements of stealth and surprise. However, Zodiac now offers ArmorFlate, the world's first inflatable bulletproof system for inflatable boats. It can be installed on the Zodiac F470, and inflates in 40 seconds. Demonstration occurred at the 2002 Multi-Agency Craft Conference at Naval Amphibious Base -Little Creek, Norfolk, Virginia, June 18–20, says an "Advanced Materials & Composites News" article.

Zodiac boats are not limited to military use. They are often chosen for law enforcement, search and rescue, and hobbyists.