The 4400 (pronounced "the forty-four hundred") is a science fiction TV series produced by CBS Paramount Network Television[1] in association with Sky Television, Renegade 83, and American Zoetrope for USA Network.[2] The show was created and written by Scott Peters and René Echevarria, and it stars Joel Gretsch and Jacqueline McKenzie. The series ran for four seasons from 2004 until its cancellation in 2007.[3]

In the pilot episode, what was originally thought to be a comet deposits a group of exactly 4400 people at Highland Beach, in the Cascade Range foothills near Mount Rainier, Washington. Each of the 4400 had disappeared at various times starting from 1946[4] in a beam of white light. None of the 4400 have aged from the time of their disappearance. Confused and disoriented, they remember nothing between the time of their disappearance and their return.

Creator Scott Peters has stated that the series was originally titled "A Light in the Sky", but looking for something more unique he decided to "play around with numbers" instead and arrived at "4400" because it "just sounded cool" and "was a very round number with two 4s and two 0s".[5] Perhaps coincidentally there were also around 4400 working members of the Writers Guild of America West at the time of the series' creation, a guild of which Peters was a member. [6].

The season(s) during which each actor has been included in the main cast are marked in black. When a starring actor also has appeared as a guest star during other seasons, this is marked in gray, with the number of guest appearances noted in italics. White square means the actor doesn't appear in that season at all. 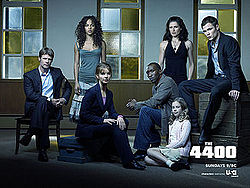 The National Threat Assessment Command (NTAC), a division of the Department of Homeland Security, is in charge of dealing with the return of the 4400. The primary agents assigned to the cases of investigating the 4400 are Tom Baldwin and Diana Skouris, as well as their immediate superior for season one, Dennis Ryland. In seasons 2–3, Ryland is replaced by Nina Jarvis and theory room consultant Marco Pacella, with Ryland becoming a recurring character. Season 4 sees Jarvis replaced by Meghan Doyle.

Many of the returned people have trouble trying to get their lives back on track after being separated from their world for years. More significantly, a small number of the returnees begins to manifest paranormal abilities, such as telekinesis, telepathy and precognition, as well as other "gifts". For example, in the pilot, Shawn Farrell manifests an ability to bring a dead bird back to life. In addition, one of the 4400, Lily Moore, has become pregnant between her disappearance and return.

The first season finale, "White Light", reveals that the 4400 were abducted not by aliens, but by humans from the Earth's future, that Kyle Baldwin was to be their "messenger", and that they were returned to avert a catastrophe.

By the second season, it is revealed that all 4400 have a fictional neurotransmitter, promicin, in their brains, which gives them their powers. The government, afraid of what this large group would do with such power, had secretly been dosing all of the 4400 with a promicin inhibitor, which had worked on most, but not all, of the 4400. One of the inhibitor's side effects is a potentially fatal immune deficiency. The inhibitor is ultimately removed from the 4400 by a dose of promicin extracted by Kevin Burkhoff from the blood of the infant Isabelle, who was never given the inhibitor.

At the beginning of the third season, the Nova Group, a terrorist faction made up of 4400s, has made itself known. Originally formed as a "defensive" group in the aftermath of the promicin-inhibitor scandal, the Nova Group eventually carries out numerous terrorist attacks against the government and NTAC. The group is responsible for many terrorist attacks including the assassination of the men involved with the promicin-inhibitor conspiracy; the attempted assassination of Ryland; the framing of Baldwin for murder; and the driving of another person to insanity.

During the third and fourth season, it is revealed that only a certain faction from the future wants to see history changed. Another faction, which prefers the status quo, opposes the 4400, and has sent their own operatives, including Isabelle Tyler and "the Marked", into the past. The exact motives of both factions have not yet been revealed.

Eventually, Jordan Collier, a returnee who declares himself the savior of humanity, makes promicin shots available to the general public. However, only half of the human population can actually tolerate promicin, and thus develop superhuman abilities, while the other half die upon taking the shot. Although the government outlaws promicin use, thousands of previously ordinary people have developed superhuman abilities, severely complicating NTAC's task. Collier later annexes a part of Seattle and transforms it into "Promise City", a self-proclaimed paradise open to all people with superhuman abilities. The US government attempts to reclaim Promise City but meets with little success.

At the conclusion of the series, Danny Farell's uncontrolled ability exposed some of the residents of Seattle to promicin, resulting in about 9,000 deaths and as many newly-empowered humans, while at the same time forcing the remains of NTAC (now themselves mostly promicin-positive) to ask Jordan Collier and his followers (as the only group immune to the 50% chance of death from exposure) to become the de facto government of Seattle. The series ended with a cliff-hanger, with Collier pledging to build the future he had promised, while the government watches uneasily as Collier's militia remains in control of Seattle, now known as Promise City.

Early in the second season, theorists at NTAC suspect that the 4400s have been placed in the timeline with their enhanced abilities for a purpose, to effect some change that could propagate and redirect the course of history. An example of this was when a 4400 named Carl Morrissey attempted to use his enhanced strength to become a vigilante and prevent crime in his neighborhood park. Morrissey was killed by a group of thugs, but his death inspired others to become involved in various neighborhood clean up projects.[7]

Another example of this effect at work came during the season two episode "Wake up Call". In that episode a mentally ill returnee uses mind control powers to force the other residents of her mental hospital to build an unusual machine. When the machine is activated it cures fellow patient Kevin Burkhoff of his crippling schizophrenia. When NTAC looks into Burkhoff's background they discover that prior to falling ill he was a brilliant biologist who was working on gene therapies which could end up being the basis of the technology which created the 4400.

Production of the third season was shot in Vancouver until July 26, 2006.[12] The third season premiered June 11, 2006, with 4.2 million viewers tuning in.[13] Executive Producer Ira Steven Behr described season three as "bigger and more mythic. It feels like 26 episodes instead of 13 because we're cramming so much stuff in".

Production of the fourth and final season began in early 2007 for a mid-year premiere,[8] returning with the episode "The Wrath of Graham".[9] Billy Campbell, the actor who plays Collier, took most of season three off to sail around the world,.[14] The show was rewritten to explain the character's absence, making him the victim of an assassination attempt. In the fourth season, Campbell returned to the series as a regular, rather than a guest star as in the previous three seasons,[15] with the revelation that the character had been alive after all, but had wandered as an amnesiac for two years until he reappeared to assume his role as the leader of the 4400.

Writer and co-creator Scott Peters announced on December 18, 2007, that due to the ongoing Writers Guild of America strike, budgetary problems, and lower-than-anticipated ratings, The 4400 had been cancelled and would not be returning for a fifth season, despite the fourth season's cliff-hanger.[3] Fans of the show mounted an unsuccessful campaign to resurrect the series, sending petitions and sunflower seeds to SciFi and USA Network president Bonnie Hammer.[16] In April 2008, the campaign shifted to target Jeff Zucker,[17] president and chief executive officer of the NBC/Universal TV group, again without success.

The theme song of the show is "A Place in Time", written by Robert Phillips and Tim Paruskewitz and performed by Amanda Abizaid.[22] All seasons are filmed in high-definition with closed captioning. USA Network broadcast episodes after season one in fullscreen 480i; the DVD releases contain the episodes in their native widescreen format.

The soundtrack to The 4400 was released on May 8, 2007 by Milan Records and includes music from the first three seasons, as follows:[23]

Note: The last track does not appear in the series. Although not in the soundtrack, Life for Rent was used in the episode The Starzl Mutation. The song Where Is My Mind was later used in the series finale.

The 4400 is set in Seattle,[24] but actually filmed in the Vancouver area.[25] All the cars shown in the series have fake Washington license plates,[citation needed] with other street signs and identifying markers altered to eliminate any British Columbia references.[citation needed] The high-tech, glass-walled 4400 Center is actually the Chan Centre for the Performing Arts at the University of British Columbia,[26] and Capilano Lake stands in for Highland Beach.[citation needed] One episode of season 4 has a few scenes set in Vancouver.[citation needed] Other cable science-fiction series, such as Kyle XY, Fringe, Stargate Atlantis,[27] and Battlestar Galactica[28] have also used the Chan Centre as a filming location.[29]