The Acrochordidae are a monotypic family[3] created for the genus Acrochordus. This is a group of primitive aquatic snakes found in Australia and Indonesia. Currently, 3 species are recognized.[4] 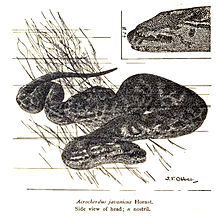 All are entirely aquatic, lacking the broad belly-scales found in most other snakes and possessing dorsally located eyes. Their most notable feature is their skin and scales. The skin is loose and baggy, giving the impression of being several sizes too large for the snake, and the scales, rather than overlapping, are tiny pyramidal projections that lead to their common names.

These snakes are ambush predators, lurking at the bottom of rivers, streams and estuaries, and waiting for fish to approach, which they grip with their coils. The rough scales allow them to hold the fish despite the mucus coating. Adults grow to between 60 cm and 2.43 m in length.

Found from western India and Sri Lanka through tropical Southeast Asia to the Philippines, south through the Indonesian/Malaysian island group to Timor, east through New Guinea to the northern coast of Australia to Mussau Island, the Bismark Archipelago and Guadalcanal Island in the Solomon Islands.[2]

These animals are rapidly becoming rare as their hides are used for handbags and leather (stripped of scales, of course). Numerous attempts have been made by both zoos and private reptile collectors to keep them, but in all cases, they have been reluctant to feed and prone to skin infections.