The Daily Star is the largest circulating English daily newspaper in Bangladesh.[1] Established by Syed Mohammed Ali (popularly known as SM Ali) in 14 January 1991,[2] the newspaper is owned by Mediastar a venture of the Transcom Group, headed by Latifur Rahman.[3] Transcom also owns the largest circulating Bengali daily newspaper Prothom Alo, a trend that is followed by other major industrial groups in Bangladesh, as the Jamuna Group runs Jugantor, the Hamim Group runs Samakal and the Globe Group Janakantha.[4]

The newspaper is led by Mahfuz Anam, editor of the Daily Star, who is also the publisher of the newspaper.[5] 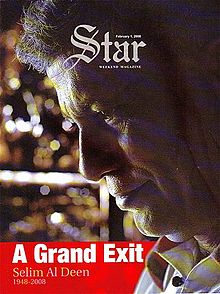 The Daily Star publishes a number of supplements along its 16 page regular publication.