Marchy was born on 2 September 1976 in Hong Kong. Marchy's father was also a racing driver and he has been karting at a young age. When the Zhuhai International Circuit was built in 1996, he enrolled in the inaugural China Formula Campus Championship. Upon winning the championship, he received a scholarship to join the La Filière racing school in Le Mans, France to continue his development.

But his funding ran out and he returned to Asia afterwards[citation needed], competing in some Asian and Australian F3 races. He won 2 Asian Formula 3 races at Sepang and finished 7th in the Macau Formula 3 Grand Prix.[1]

In August 2003, driving a Dallara F301 Renault, he took pole position in the Australian Formula 3 race at Philip Island in treachrous conditions.[2]

Later that year he won two Formula BMW Asia races in Beijing and finished 2nd to Hideaki Nakao in the Formula Renault race in Macau.[3] He also took part in the Porsche Carrera Cup Asia race and finished fifth, despite a problem with the gas pedal, behind Alex Yoong, Charles Kwan, Matthew Marsh and Nigel Albon.[4]

In 2004, Marchy teamed up with the top Asian racing outfit, Team Meritus, to race in the Formula BMW Asia series. He won 12 races out of 14, making him the first Chinese formula racing champion in an international series.

After winning the 2004 Formula BMW Asia title, Marchy had the chance to test an F1 car with the Minardi team.[5]

Marchy failed to get any sponsorship deals in 2005 and 2006 to support a full season's racing. But a last minute deal allowed him to re-unite with Team Meritus in the Formula Asia V6 by Renault race at Zhuhai. He finished a strong second in the final round of the season to Matt Halliday and set the fastest race lap in the process, rekindling his hopes to race professionally again in 2007 and beyond.[6]

Marchy raced in the Asian Super Car Challenge in Zhuhai on 24–25 March, claiming one win and one second place in the Ferrari 430. He then drove in the Porsche Carrera Cup Asia in Sepang where he finished second twice.

Marchy has been confirmed as Meritus Racing's driver for the 2007 Formula Asia V6 by Renault series. He hopes that by achieving success in the series, he will be able to progress to the Champ Car World Series in 2008.[7]

On 13 July 2007, Marchy was announced as the driver for a new team set up by Adrian Fu to compete in the remainder of the Porsche Carrera Cup Asia series under the banner "Racing for Charity", in help increase the profile and visibility of the Child's Dream Foundation.[8]

On 1 August 2007, it was announced by A1 Team China that he will join the rookie test at the end of August at Silverstone, alongside three other drivers. The best performer from this test will join Cheng Congfu as China's two A1GP representatives.

On 20 September 2007, he was officially announced as the second driver for A1 Team China. He made his debut for the team in round 2 at the Czech Republic on 12 October 2007, he gathered data for the team in the rookie sessions. Cheng Congfu went on to score 10th and 4th place finishes.

On 4 November 2007, Marchy took part in the Porsche Carrera Cup Asia at Zhuhai International Circuit and won both rounds 11[9] and 12.[10]

On 18 November 2007, he also took part in the Porsche Carrera Cup Asia race in Macau, and finished fourth on the road (later promoted to third place after on the road winner Danny Watts was given a 30-second penalty for passing under a yellow flag.)

Marchy Lee became the first Chinese driver to race in the inaugural Speedcar Series. He drove car no. 50.[11] He failed to finish his first two races in Malaysia, as well as his first race in Bahrain, but took 4th place in race 2. He then finished 5th and 3rd in the two races in Dubai.

He is also competing in the Porsche Carrera Cup Asia. Racing for Team BetterLife, he finished 2nd and 4th in the opening rounds at Sepang. Then he took 2nd and 5th in round 2 at Shanghai. 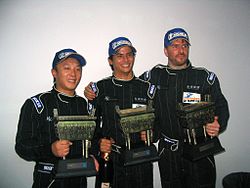 In 2010, Marchy raced in the Porsche Carrera Cup Asia for Red Bull Racing (team is run by Dynaten Motorsports). He scored two wins at Zhuhai in June. At the last round in Zhuhai, the Hong Kong racer, who began as the only other championship contender, fought hard every inch of the way battling first Simonsen and then Christian Menzel, but he could not do enough to stay in the running and became championship runner-up for 2010.[12]

On 7 November 2011, Marchy partnered Matthew Marsh and Alex Yoong to drive an Audi R8 LMS for KK Performance (Again, team is run by Dynaten Motorsport) in the 2010 1000 km of Zhuhai race, part of the Intercontinental Le Mans Cup. Starting eleventh on the grid, the Audi R8 LMS #98 was at the heart of the race, before inheriting the lead of GTC after the retirement of the sister car of United Autosport. Lee, Yoong and Marsh took the chequered flag in 12th position overall.[13]

On 10 March 2011, Marchy Lee announced that he will join the 2011 World Touring Car Championship with KK Motorsports.[15] But he left the championship after just 3 rounds.