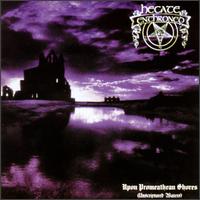 "Upon Promethean Shores" is the first full-length album by the British black metal band . This is essentially their "Ode for a Haunted Wood" demo remastered and released as the first album under their record label.

By the second album, the band would replace their drummer, keyboardist, and guitarist.

All music by Hecate Enthroned
All lyrics by Jon, concepts by Marc and Jon