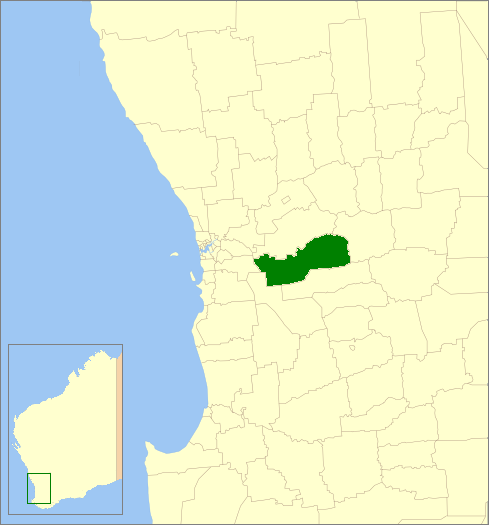 The Shire of Beverley is a Local Government Area located in the Wheatbelt region of , and is about convert|130|km|mi|-1 southeast of Perth, the state capital. The Shire covers an area of convert|2372|km2|sqmi|0, starting convert|20|km|mi|0 outside Armadale in the and extending eastwards beyond the scarp into agricultural lands which support broad acre activities such as livestock and cropping. Its seat of government is the town of Beverley, which accommodates just over half of the Shire's population.

In 1871, the Beverley Road Board (later Shire Council) was created to manage a territory with immense boundaries, taking in land all the way east to Eucla on the n border. Its scope was so broad that from 1892 to 1913, the town of Beverley had its own municipal council operating separately from the Road Board. However, over the years, each of the major towns were granted their own road boards, and by 1923 the present boundaries were established. In 1961, the Road Board was renamed to the Beverley Shire Council. [cite web|url=http://www.beverley.wa.gov.au/our_council/history.html|title=Council History|author=Shire of Beverley|accessdate=2006-10-16]

The shire has been divided into 3 wards.