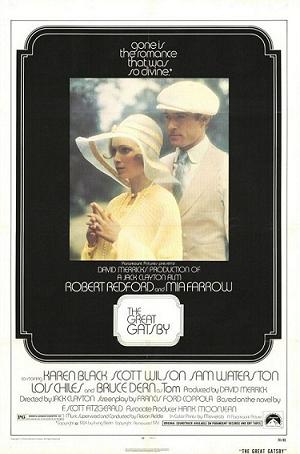 "The Great Gatsby" is a 1974 film made by Newdon Productions and . It was directed by and produced by with Hank Moonjean as associate producer, from a by based on the novel of the same title by . The music score was by and the cinematography by . The production was designed by .

The film stars , , , , Scott Wilson, , and with , and . , aged 6, appears in her second film role (her first being in two years earlier), while 's (uncredited) minor role was edited out of the published version of the film.

The rights to the novel were purchased in 1971 by Robert Evans so that his then-wife, , could play Daisy. Other actresses considered for the role were , , , , and . After McGraw left Evans for , Farrow was cast as Daisy and Chiles was given the role of Jordan. , , and were all considered for the role of Gatsby, but they were rejected or declined the offer. Beatty wanted to direct producer Evans as Gatsby, and Nicholson didn't think that McGraw was right for the role of Daisy, who was still attached when he was approached. Farrow was pregnant during the shooting and the film was shot with her wearing loose, flowing dresses and in tight close-ups.

was the original screenwriter, but he was replaced by Francis Ford Coppola. On his commentary track for The Godfather DVD, Coppola makes reference to writing the Gatsby script at the time, though he comments: "Not that the director paid any attention to it. The script that I wrote did not get made."

The and mansions in , were used for Gatsby's house, and scenes at the Buchanan's home were filmed at in , England. One driving scene was shot in , UK. Other scenes were filmed in .

Relevant commentary about this film

* [http://www.filmcritic.com/misc/emporium.nsf/reviews/The-Great-Gatsby Don Wilmot] , a film reviewer, believes that this film is not a shortcut for reading the novel if it is assigned by your High School English teacher. He then writes, "Sadly, the movie treats Fitzgerald’s flawless novel as little more than a Jazz-age costume drama, and it goes heavy on the costumes, light on the drama." This comment can be appreciated by anyone wanting a quick comparison of this film with the Fitzgerald novel. However, Wilmott does a good job in presenting the plot and some of the complications of the plot, and "It’s only a matter of time before all their worlds start to fall apart." He points out that the story is multilayered.

*Another film reviewer, [http://www.dvdtown.com/review/Great_Gatsby_The/11413/1853/ John J. Pucco] ,writes that the film does not match the novel. He writes,that the earlier film versions of 1926, 1949, this 1974 version and the 2001 TV adaptation "...were unable adequately to convey the book's poetic vision." Apparently film makers miss the mark as they focused on the romantic elements of the story, missing the alegorical and life themes. The wealth of symbolism, craft, and art in words in the book is lost in this and the other films. On the surface, the story is about the illicit love affair between Daisy and Gatsby. However, the story uses powerful images to portray the elaborate connections of the characters ( in the book) to the corruption of the American Dream. "... what critics of the late forties finally picked up on and declared as a perfect depiction of the corruption of the American Dream" The author offers an insightful view in that the book shows "story is really about the corrosive forces of wealth, class structures in a classless society..." among other themes universal to being human. The film versions, including this one, fail to pick up on the intricate depth of the story and fail to covey its message. Mr. Pucco also gives a brief overview of the plot in his review.
* [http://rogerebert.suntimes.com/apps/pbcs.dll/article?AID=/19740101/REVIEWS/401010315/1023/ Roger Ebert] notices differences from the novel, as well. He says that the movie follows the novel faithfully, but "...the feel, mood, and spirit of..." the novel is lost.

*imdb title|id=0071577|title=The Great Gatsby (1974)
* [http://www.notstarring.com/movies/great-gatsby Complete list of actors who were considered for roles]
*1974 in Film including Academy Award winners