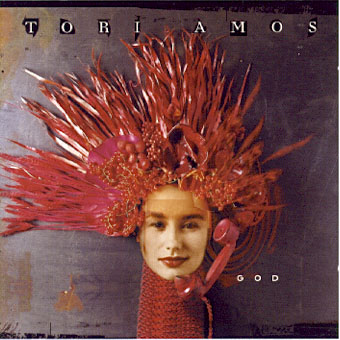 "God" is a song by American . It is the second track on Amos' album . The song reached number forty-four on the as well as #1 on the US Modern Rock Chart.

The song was Amos' response to patriarchy and the repression of women through religion. Lyrically it was heavily confrontational of male-deity headed religions, with lyrics like "God, sometimes you just don't come through/do you need a woman to look after you?" American radio was very hesitant to play the song because of its heavy use of guitars, so a promotional CD was released in the USA with two commercially unavailable mixes of the song: the "No Guitar" mix and the "Some Guitar" mix. The b-sides to the American release included Amos' reworking of the traditional song "", with new lyrics reflecting her heritage, as well as a two-song instrumental piano suite. An American cassette single featured the b-side "Sister Janet".

A completely different single was released in Europe on CD, 12" and 7" vinyl single, and cassette. The 7" single was a glossy dual sided picture disc. They featured ambient and jungle house remixes of the track by .

The music video for God features Amos in a variety of religiously themed situations, notably showing mundane situations in day to day life and making visual correlations with religious rituals. This includes visually comparing a used by a with a basketball player using a belt on his arm while injecting drugs. The video is often remembered for scenes of Amos dancing with a plethora of white rats; this was commented on in an episode of the television show .