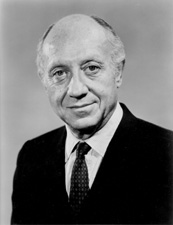 Javits graduated from and its law school in Manhattan. He was admitted to the bar in 1927. During , he was a in the .

He was initially elected to New York's 21st congressional district (since redistricted) in the during the heavily Republican year of 1946. He was a member of the freshman class along with of and of . He served from 1947 to 1954, then resigned his seat after his election as the New York Attorney General.

In 1956, he defeated , in a U.S. Senate race to succeed the retiring Democratic Senator . Like Lehman, Javits was for a time the only in the U.S. Senate.

Javits was generally considered a liberal Republican, and was supportive of s and movements for . In 1964, Javits refused to support his party's presidential nominee, his conservative colleague, of even though Goldwater had said in 1962 that were he a New York voter, he would vote to reelect Javits.

Senator Javits sponsored (1) the first Senate page in 1965 and (2) the first female page in 1971. His background, coupled with his liberal stands, enabled him to win the votes of many historically Democratic voters. He was highly successful in all elections in which he was a candidate from 1946 to 1974.Fact|date=February 2007

Javits played a major role in legislation protecting ers, as well as in the passage of the ; he led the effort to get the passed. He reached the position of Ranking Minority Member on the Committee on Foreign Relations while accruing greater than any New York Senator before or since (). He was also one of the main forces behind the 1965 Immigration and Nationality Act that by removing immigration quota that favored Western European nations helped to make the U.S. a truly diverse and multicultural country.

Javits served until 1981; his 1979 diagnosis with amytrophic lateral sclerosis (also known as 's Disease) led to a 1980 by the comparatively lesser-known Republican county official . D'Amato received 323,468 primary votes (55.7 percent) to Javits' 257,433 (44.3 percent). Javits' loss to D'Amato stemmed from Javits' continuing illness and his failure to adjust politically to the rightward movement of the GOP.

Following the primary defeat, Javits ran as the Liberal Party candidate in the general election, having split the Democratic base vote with of Brooklyn and giving D'Amato a plurality victory.

Javits died of Lou Gehrig's disease in , at the age of eighty-one. In addition to Marian, he was survived by three children, Joshua, Carla, and Joy.

New York's Javits Center is named in his honor, as is a playground at the southwestern edge of . The [ [http://www.emporis.com/en/wm/bu/?id=113749 Jacob K. Javits Federal Building, New York City ] ] at 26 Federal Plaza in lower Manhattan's Civic Center district, as well as a lecture hall on the campus of the on , are also named after him.

The awards a number of to support graduate students in the humanities and social sciences. [ [http://www.ed.gov/programs/jacobjavits/index.html Jacob K. Javits Fellowships Program] , from the U.S. Department of Education website]