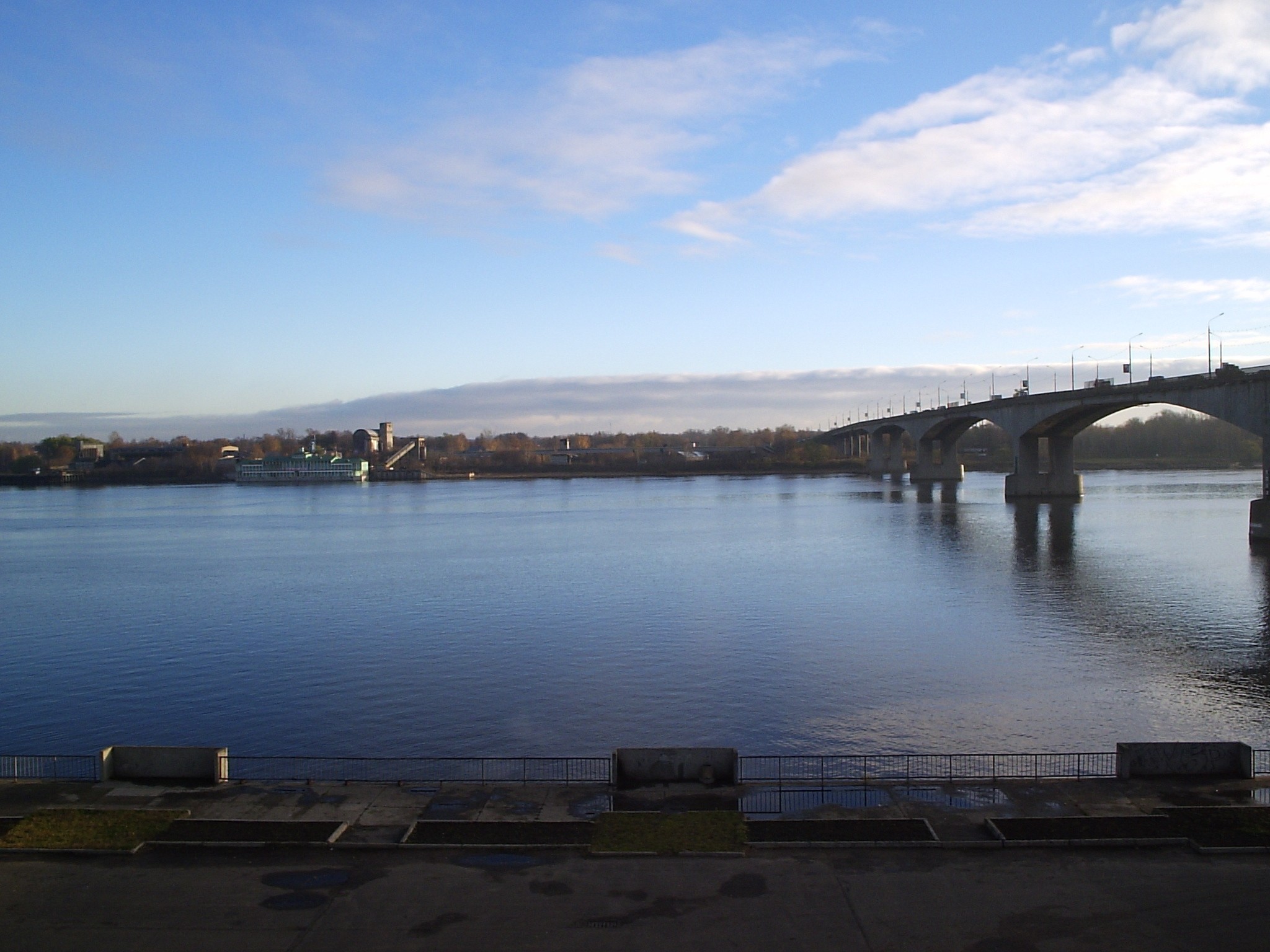 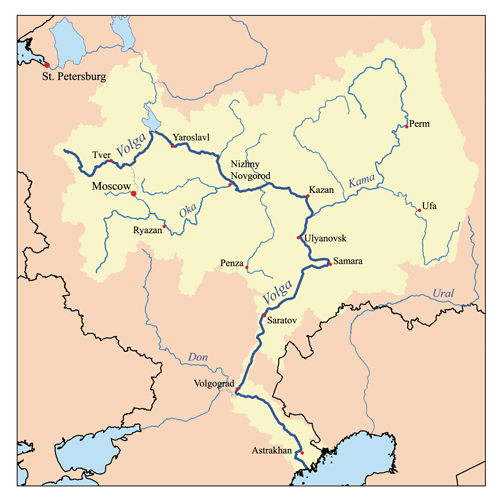 map_size = 300
map_caption = Map of the Volga watershed The Volga ( _ru. Волга, _tt. Идел|İdel) is the largest in in terms of length, discharge, and watershed. It flows through the western part of , and is widely viewed as the national river of Russia. In fact, eleven out of the twenty largest cities of Russia, including its capital , are situated in the Volga basin. Some of the largest s in the world can be found along the Volga.

The Russian hydronym " _ru. Волга" is akin to the Slavic word for "wetness", "humidity" (влага, волога). [See 's dictionary under "Волга".] The Russian name is transliterated as "Volga" in English and "Wolga" in German.

The living along the river formerly referred to it as or (probably the origin of 's name). In modern , the Volga is known as "İdel" (Идел) in Tatar, "Idyll" in ancient Chuvash-Bolgar, Атăл ("Atăl") in Chuvash, "Idhel" in Bashkir, and "İdil" in Turkish. The Turkic peoples associated the Itil's origin with the . Thus, a right tributary to the Kama river was named the Aq Itil ("White Itil").

Another version of the same root is represented by Mari Юл ("Jul"). Under the Mongols, the river was known by its other Turkic name "Sarı-su" ("yellow water") but Mongols used also their own name "Shar mörön" ("yellow river").

The ancient and modern Mordvin name for the Volga, Рав ("Rav"), apparently reflects the ancient hydronym "*Rhā", supposedly cognate with the ancient and names "Rañha" and "Rasah" for a mythical river supposed to flow around the earth [Lebedynsky, Iaroslav. "Les Sarmates : Amazones et lanciers cuirassés entre Oural et Danube". Paris: Editions Errance, 2002.] . It has even been suggested that the name Russian itself might have been derived from Rasah/Rosah, the name of the Volga River (by F.Knauer Moscow 1901). These words are all connected in their primary meaning of "dew, liquid, moisture".

'Rasa' in Lithuanian language means a dew and 'Vilga' means to moisten or to damp...and 'Rusenti, Rusne' means to flow (like Baltic tribe 'Prussians' comes from 'Parusne, prusne' and even a word to bath 'prausti' comes from this root). It's obvious that both Lithuania and Rus or Russia mean the people who lives on the banks of rivers ('Lietuva' directly means the river's channel and 'lietis' means to flow or to pour, and 'lietus' means the rain)Or|date=September 2008

The Volga belongs to the closed basin of the . Rising in the m to ft|225 above sea level north-west of and about km to mi|320 south-east of , the Volga heads east past , , , , , , and . From there it turns south, flows past , , Samara, and , and discharges into the Caspian Sea below at m to ft|28 below sea level. At its most strategic point, it bends toward the Don ("the big bend"). Volgograd, formerly Stalingrad, is located there.

The Volga has many , most importantly the Kama, the Oka, the Vetluga, and the Sura rivers. The Volga and its tributaries form the Volga river system, which drains an area of about 1.35 million square kilometres in the most heavily populated part of Russia. The has a length of about 160 kilometres and includes as many as 500 channels and smaller rivers. The largest estuary in Europe, it is the only place in Russia where s, es, and lotuses may be found. The Volga freezes for most of its length during three months of each year.

The Volga drains most of Western Russia. Its many large reservoirs provide and hydroelectric power. The , the , and the form navigable s connecting Moscow to the , the , the , the and the . High levels of chemical pollution currently give cause for environmental concern.

The fertile river valley provides large quantities of wheat, and also has many mineral riches. A substantial petroleum industry centres on the Volga valley. Other minerals include natural gas, salt, and potash. The Volga Delta and the nearby offer superb fishing grounds. , at the delta, is the centre of the industry.

A number of large hydroelectric reservoirs were constructed on the Volga during the Soviet rule. They are:
*
*
*
*
*
*ndash the largest in Europe by surface
*
*

The downstream of the Volga, widely believed to have been a cradle of the Proto-Indo-European civilization, was settled by Huns and other Turkic peoples in the first millennium AD, replacing . The ancient scholar of Alexandria mentions the lower Volga in his "Geography" (Book 5, Chapter 8, 2nd Map of Asia). He calls it the "Rha", which was the Scythian name for the river. Ptolemy believed the Don and the Volga shared the same upper branch, which flowed from the Mountains.

Subsequently the river basin played an important role in the movements of peoples from Asia to Europe. A powerful polity of once flourished where the Kama river joins the Volga, while controlled the lower stretches of the river. Such Volga cities as , , or Sarai were among the largest in the medieval world. The river served as an important trade routeconnecting Scandinavia, Rus', and Volga Bulgaria with Khazaria and Persia.

Khazars were replaced by , and , who founded the in the lower reaches of the Volga. Later their empire broke into the and both of which were conquered by the Russians in the course of the 16th century . The Russian people's deep feeling for the Volga finds echoes in their culture and literature, starting from the 12th-century . [ [http://www.volgawriter.com/VW%20Volga%20River.htm Volga River ] ] is one of many songs devoted to the national river of Russia.

Construction of Soviet dams often involved enforced resettlement of huge numbers of people, as well as destruction of their historical heritage. For instance, the town of was flooded for the purpose of constructing the (then the largest artificial lake in the world), and the construction of the entailed the flooding of several monasteries with buildings dating from the 15th and 16th centuries. In such cases the ecological and cultural damage often outbalanced any economical advantage. ["In all, Soviet dams flooded 2,600 villages and 165 cities, almost 78,000 sq. km. - the area of Maryland, Delaware, Massachusetts, and New Jersey combined - including nearly 31,000 sq. km. of agricultural land and 31,000 sq. km. of forestland". Quoted from: Paul R. Josephson. "Industrialized Nature: Brute Force Technology and the Transformation of the Natural World". Island Press, 2002. ISBN 1559637773. Page 31.]

During the , both sides fielded warships on the Volga. In 1918, the Red participated in driving the Whites eastward, from the Middle Volga at Kazan to the Kama and eventually to on the Belaya River. [, [http://www.marxists.org/history/ussr/government/red-army/1918/raskolnikov/ilyin/index.htm Introduction] to s "Tales of Sub-lieutenant Ilyin."]

In modern times, the city on the big bend of the Volga, currently known as , witnessed the , the bloodiest battle in human history, in which the and the German forces were deadlocked in a battle for access to the river. The Volga was (and still is) a vital transport route between and the , which provides access to the oil fields of .

planned to use access to the oil fields of to fuel future Nazi conquests. Apart from that, whoever held both sides of the river could move valuable troops and war machines, across the river, to defeat the enemy's fortifactions beyond the river. [ [http://www.historylearningsite.co.uk/battle_of_stalingrad.htm ::The Battle of Stalingrad:: ] ] By taking the river, Hitler's Germany would have been able to move supplies, s, and men into the northern part of Russia.

For this reason, many assaults where brought about in an attempt to remove the other side from the banks of the river. In these battles, The Soviet Union was the main side, while the German troops used a more stance, though most the fighting was head on head, with no clear offensive or defensive side.

The settled along the upper Volga in the 8th and 9th centuries, founding such towns as () and (). In the course of several centuries they assimilated the indigenous Finnic population which included the and peoples. The surviving peoples of Volga Finnic ethnicity include the Maris and of the middle Volga.

Apart from the , the earliest Turkic tribes arrived in the and assimilated some Finnic and Indo-European population on the middle and lower Volga. The and are descendants of the population of medieval . Another Turkic group, the , formerly inhabited the lower Volga steppes.

The Volga region is home to a German minority group, the . had issued a Manifesto in 1763 inviting all foreigners to come and populate the region, offering them numerous incentives to do so. This was partly to develop the region but also to provide a buffer zone between the Russians and the Mongol hordes to the east. Because of conditions in German territories, the Germans responded in the largest numbers. Under the a slice of the region was turned into the to house many of the Volga Germans. Others were executed or dispersed throughout the Soviet Union prior to and after .

The Volga, widened for navigation purposes with construction of huge dams during the years of 's , is of great importance to inland shipping and transport in Russia: all the dams in the river have been equipped with large (double) ship locks, so that vessels of considerable dimensions can actually travel from the almost to the upstream end of the river.

This infrastructure has been designed for vessels of a relatively large scale (lock dimensions of 290 x 30 meters on the Volga, slightly smaller on some of the other rivers and canals) and it spans many thousands of kilometers. A number of formerly state-run, now mostly privatized, companies operate passenger and cargo vessels on the river; , with over 200 s, is one of them.

In the later Soviet era, up to the modern times, and have been among the largest cargo exports transported on the Volga. [ [http://www.sciencedirect.com/science?_ob=ArticleURL&_udi=B6VH4-442YC33-6&_user=10&_rdoc=1&_fmt=&_orig=search&_sort=d&view=c&_acct=C000050221&_version=1&_urlVersion=0&_userid=10&md5=ff2c77e5d18e285e9b053e7a6d3c0509] ] Until recently access to the Russian waterways was granted to foreign vessels on a only very limited scale. The increasing contacts between the and Russia have led to new policies with regard to the access to the Russian inland waterways. It is expected that vessels of other nations will be allowed on the Russian rivers soon. [ [http://www.noordersoft.com/indexen.html NoorderSoft Waterways Database)] ]

* [http://earthtrends.wri.org/maps_spatial/maps_detail_static.cfm?map_select=339&theme=2 Information and a map of the Volga's watershed]
* [http://earthfromspace.photoglobe.info/spc_volga_delta.html Volga Delta from Space]
* [http://as-volga.com Photos of the Volga coasts]
* [http://cabri-volga.org "CABRI-Volga": EU-Russian project on environmental risk management in the Volga Basin]