Orbe (Latin: Urba; German: Orbach) is a municipality in the Swiss canton of Vaud. It was the seat of the former district of Orbe and is now part of the district of Jura-Nord Vaudois.

During the Roman era, Orbe - then known as Urba - was a town of Gallia, in the territory of the Helvetii. In the Antonine Itinerary it is placed between Lacus Lausonius and Ariolica, xviii m.p. from Lacus Lausonius and xxiiii m.p. from Ariolica. On the Boscéaz hill, a Roman villa was built by an unknown landowner. The mosaics of the villa are still visible. 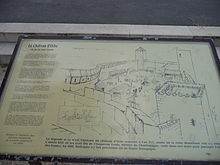 Orbe is located on the route to the Jougne Pass and at the intersection of important roads that connected the Jura Mountains to the Alps and the Rhine and Rhone river. Its location made Orbe into an important transit point. During the Middle Ages a bridge was built across the Orbe river. On the left bank were the villa Tavellis and the parish church of Saint-Germain, while on the right bank was the villa Tabernis with the church of Saint-Martin. The castle and market were built on the hill above the river and the bridge. In 888 the town was owned by Rudolf I of Burgundy. The town's mint produced silver coins for Conrad the peaceful (937-993). After the death of the last Rudolf in 1032, the area was incorporated into the Holy Roman Empire. In 1076 all the ties to the Kingdom of Burgundy in Orbe were severed by Emperor Henry IV and Count Wilhelm II. In 1168, about half of the town of Orbe came under Amadeus II of Montfaucon, the count of Montbéliard. The churches and a large part of Orbe were owned by the monastery at Baulmes and Payerne Priory in 1183.[2]

At the end of the 11th Century, Romainmôtier Abbey built a hospital (first mentioned in 1275) in Orbe. In 1139, the Abbey acquired the adjoining chapel of Notre-Dame. Amadeus III of Montfaucon-Montbeliard fortified the town in 1235 with the construction of the Bourg-Vieux and Bourg-Neuf. In 1233 a round keep was mentioned in the castle. The fortifications allowed Orbe to control the road that led to Les Clées and the Jura Mountains in one direction and to Lausanne in the other. Together with Echallens, Orbe formed a burgund enclave in the midst of the Savoy lands and the diocese of Lausanne.[2]

Girard de Montfaucon granted Orbe the same rights as city of Moudon, a decision which was upheld by his widow Jaquette of Grandson in 1352. By inheritance, the town went to Count Montbeliard in 1379, then to Louis de Chalon, Prince of Orange in 1410. It was captured for the first time by the Swiss Confederation in 1475 and then quickly recovered by Hugh of Chalon. In the following year, 1476, Charles the Bold met with Swiss messengers at Orbe. After the Burgundian Wars, the lands of the house of Chalon on the Swiss side of the Jura mountains were administered by Bern and Freiburg. Orbe, together with Echallens, were managed as a gemeine Herrschaft or shared subject territory by from 1484 until 1798. In 1798 a majority of the urban population supported the Helvetic Revolution despite the opposition of the nobles. During the Stecklikrieg, when the government of the Helvetic Republic retreated to Lausanne, following their capitulation, Orbe was briefly occupied by Federal troops in September 1802. Between 1798 and 2006, Orbe was the capital of a district of the same name.[2]

Aerial view of Orbe, showing the tree covered Orbe river and the hill of the old town

Of the built up area, industrial buildings made up 3.0% of the total area while housing and buildings made up 8.7% and transportation infrastructure made up 5.7%. while parks, green belts and sports fields made up 1.7%. Out of the forested land, 2.2% of the total land area is heavily forested and 1.4% is covered with orchards or small clusters of trees. Of the agricultural land, 60.7% is used for growing crops and 9.2% is pastures, while 3.7% is used for orchards or vine crops. All the water in the municipality is flowing water.[3]

The municipality was the capital of the Orbe District until it was dissolved on 31 August 2006, and Orbe became part of the new district of Jura-Nord Vaudois.[4]

The municipality is located on a hill partly surrounded by the Orbe river. It consists of the village of Orbe and a number of hamlets including Granges Saint-Germain, Granges Saint-Martin, Mont Choisi and Le Puisoir.

The blazon of the municipal coat of arms is Gules, two Sea-daces addorsed Or.[5] 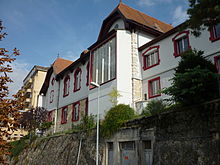 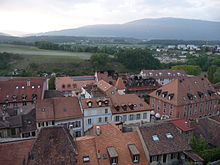 Part of the old city of Orbe 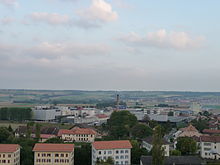 As of 2000[update], there were 2,103 people who were single and never married in the municipality. There were 2,441 married individuals, 304 widows or widowers and 291 individuals who are divorced.[8]

As of 2000[update] the average number of residents per living room was 0.63 which is about equal to the cantonal average of 0.61 per room.[7] In this case, a room is defined as space of a housing unit of at least 4 m² (43 sq ft) as normal bedrooms, dining rooms, living rooms, kitchens and habitable cellars and attics.[10] About 31.4% of the total households were owner occupied, or in other words did not pay rent (though they may have a mortgage or a rent-to-own agreement).[11]

The Boscéaz (a gallo-roman villa), Orbe Castle with its two towers and plaza, the Swiss Reformed Church of Notre-Dame and the City Hall are listed as Swiss heritage site of national significance. The entire old town of Orbe is part of the Inventory of Swiss Heritage Sites.[14]

The villa is known for its roman mosaics, which are composed of several hundreds of pieces on the floor of the original site. The villa was a palace belonging to a rich but unknown landowner. It was built in approximately AD 160 and abandoned around the year AD 270.

The town has a Nestle Research & Development factory with a working force of over 500 employees. The factory is responsible for producing Nespresso and also Nestlé's boxed cereals. The factory accounts for just over 15% of Nestlé's overall turnover per annum. 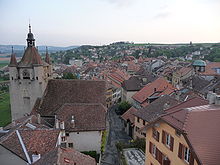 The Church of Notre Dame in Orbe

As of 2000[update], there were 322 students in Orbe who came from another municipality, while 219 residents attended schools outside the municipality.[17]