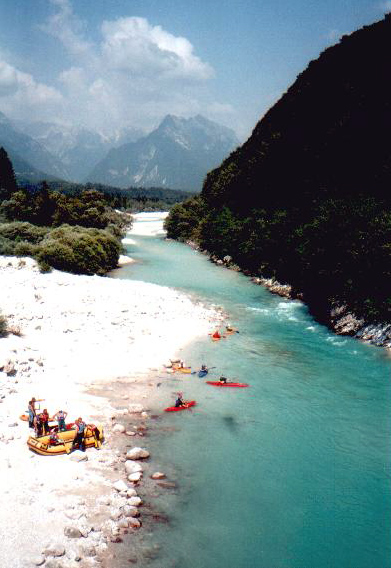 The was the stage of major military operations including twelve battles on the Italian front in between May 1915 and November 1917 in which over 300,000 Austro-Hungarian and Italian soldiers lost their lives.

Some people in Slovenia call the river "the Emerald Beauty" because of its green waters. It is said to be one of the rare rivers in the world which retain such a colour throughout their length. The Soča inspired the Slovene to write his best-known poem "Soči" (""), one of the masterpieces of Slovenian poetry.

The Soča is also well known for its unique species "" (known as the marble trout), which lives in the upper course of the crystal-clear river. This species is endangered due to the introduction of other non-indigenous trout species sometime between World War I and World War II.

This region served as a film location for the 2008 film .

* [http://www.potimiruvposocju.si/ The Walks of Peace in the Soča Region Foundation] . The Foundation preserves, restores and presents the historical and cultural heritage of the First World War in the area of the Isonzo Front for the study, tourist and educational purposes. The website is in Slovenian, English, Italian, and German.