The Maldivian Coast Guard is the naval or maritime arm of the Maldivian National Defence Force. With the absence of a navy in the country, the MNDF Coast Guard functions as the armed maritime force of the nation with a charter to contribute to national defence and by and large to respond to issues related to the maritime security of the nation. Therefore, the Coast Guard is documented as the custodian of the Maldives Maritime Domain. Maritime security is a constituent ingredient of the national security in a maritime nation such as the Maldives and its significance is best understood when one perceives the island or the archipelagic nature of the country. [2].

As the new Government took power in 2008 the Coast Guard has been the highest priority of the Defense sector in Maldives. Four Coast Guard Squadrons are deployed to South, Central and North of Maldives. And a Strategic Reserve is established at the Capital Male'.

The roots of the MNDF Coast Guard lie in the 1570’s Kalhuoffummi, as its insignia symbolizes, the legendary sailing boat used by the heroic, Mohamed Thakurufaanu and his allies in his guerrilla battle to free the country from the invasion of the Portuguese. Until the establishment of the modern Coast Guard in 1980, the small speed boat section of the National Security Service was the maritime security service in the Maldives and it lays claim on being the Maldives oldest continuous seagoing force. The Coast Guard was officially established as a separate wing of the defence forces on 1 January 1980 with the late Colonel Hussain Fulhu as its first Commanding Officer. [2]

The MNDF Coast Guard was raised and has expanded quite significantly over the past years. It has grown in terms of its fleet, reach and capabilities. Today the MNDF Coast Guard is a versatile and modern force that is capable of dispelling a range of maritime threats by identification and interception well before they reach the shores. [2]

Consequently, The MNDF Coast Guard has a dual role, with the strategic military application settling within the parameters of national defence and territorial integrity as the primary task while its secondary role is aimed at relatively non military aspects of maritime security which covers areas such as maritime terrorism, transnational crime, drug trafficking through maritime routes, smuggling, piracy and so forth. In times of peace, Coast Guard is popular as a force of goodwill due to its endeavors in building bridges of friendship with the public. It reaches out to people and save their lives by intensely conducting well planned and executed Search and Rescue (SAR) operations at sea and assume other humanitarian roles in crises when the public is in need. [2]

Whilst most other military services of the MNDF are either at standby or training for the unseen hostile actions, the Coast Guard is deployed every day. With decentralized Coast Guard squadrons placed at Area Commands in North, Central and South of Maldives and a strategic reserve at the capital Male’ under the new Strategic Defence Directive, and much responsibility placed on even the most junior sailors, the Coast Guard is frequently lauded for its quick responsiveness and adaptability in a broad range of tasks and emergencies. [2]

Its capabilities were strengthened and modernised after the 3 November 1988 attack by PLOTE terrorists. [2]

After the 1988 incident, 6 British patrol craft were acquired. These were 4 Tracker II class, 1 Dagger class and 1 Cheverton class ships. In 1998, 3 vessels were built at the Colombo Dockyard. These are 2 Coastal Surveillance Vessels of 24 meters, CGS Ghazee and CGS Iskandhar and 1 Fast Landing Craft of 20 metres length. The CGS also acquired a 17 meter fire fighting vessel. [2] 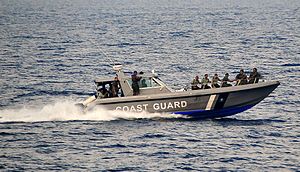 After the 2004 Tsunami, the need for larger vessels with off-shore patrol capabilities were given a high priority. The Indian Navy donated a Trinkat Class Fast Attack Craft of 46 metres length in April 2006, commissioned as CGS Huravee and is commanded by Lieutenant Mohamed Jamshad. Lt. Jamshad was previously was the executive officer of CGS Huravee. [2]

The Maldives Coast Guard recently acquired two additional large offshore patrol craft, constructed at the Colombo Dockyard, Sri Lanka. These vessels are 42m and 35m in length. The 35m patrol craft was brought to Male on 21 April 2007 and commissioned as CGS Shaheedh Ali, commanded by Lieutenant Moahmed Fahumy. Lt Mohamed Fahumy was previously the executive officer of CGS Shaheed Ali.The 42m vessel was brought to Male on 11 November 2007 and commissioned as CGS Ghaazee. It is commanded by Lieutenant Ahmed Fathih. Lt Fathih was previously the executive officer of CGS Ghaazee. [2]

The Ghaazee was renamed CGS Nooradheen after the Sultan who first founded the Maldivian armed forces on 21 April 1892. In addition to these, the Coast Guard operates some small in-shore patrol craft.