In 2000, some changes were introduced to the pageant. The contestant had to represent the Province, City, or Municipality where they were born or raised. The winner would then move on to other pageants, specifically Miss Universe.

From 1956-2002, the pageant would start with the contestants wearing dresses. Then they would wear their swimsuits. In 1972, after the swimsuits they dressed in Provincial Costumes. From 1972-1988, the winner of best national costumes would be use in Miss Universe, Miss World, Miss International. Then they used the same dresses they used for the opening. They would pick the semi-finalist. The semi finalist would show the evening. Then they picked the quarter-finalist. The quarter-finalist was asked a question. Sometimes there were small entries so semi finalist would show the evening and would be asked question at the same time. They picked five finalists and crown and sashed the Misses Dominican Republic and sashed the runner-ups.

In the pageant in 1995, candidates representing Muninipalities started entering because the pageant started a program that searched for beautiful young women who were poor to enter the beauty pageant with out paying entry fees. The charity was called El Sueño de una Chica Bella which was made by the director. They selected the poorest ones to enter to have a better life. Besides entering they got $3,000 Dollars or $106,000 Dominican Pesos to each of them. They were the only to represent a Municipality they were found. This last until 1997. Before municipalities were represented, but only one to three could enter representing any municipality. They had represented the province and the dependencies they were born in. The candidates that represented the Dominican communities had to be born in the Country. 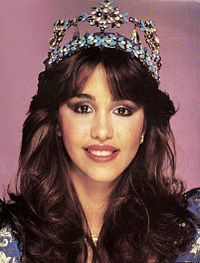 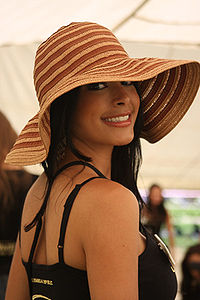 Miss Turismo Dominicana was a separate pageant that crowns a represents Dominican Republic in Miss Tourism World. The Pageant was made 2007 by electing a dinner with 20 candidates and were asked questions. The candidates came from other Dominican pageant. In 2008 the first official pageant was created with the franchise of Miss Tourism Queen International.

In Miss Dominican Republic Universe, the "4ta Finalista" or the 4th Runner Up would represent the Dominican Republic in Miss Global City. In an Exception of 2006 and 2007, where in 2006 the winner, Mía Taveras entered and in 2008 the 1st Runner Up, Mariel Sabogal enters

Each year there is a different venue for Miss Dominican Republic. When the winner won, the next year the pageant would be in the province or city she represented last year. It would be in an Auditorium from a local College, or University from Province or city.

Province and Municipalities that had won Miss Dominican Republic. 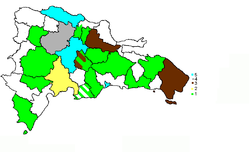 Province and Municipalities that had won Miss Dominican Republic for Miss World. 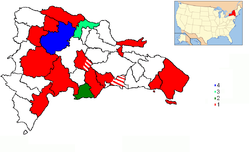 Province and Municipalities that had won Miss Dominican Republic for Miss International. 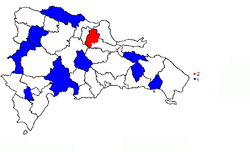 Province and Municipalities that had won Miss Dominican Republic for Miss Earth.