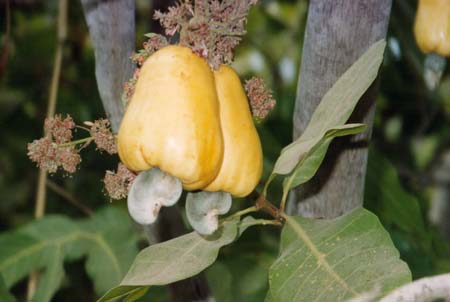 image_caption = Cashews ready for harvest in
regnum =
unranked_divisio =
unranked_classis =
unranked_ordo =
ordo =
familia =
genus = ""
species = "A. occidentale"
binomial = "Anacardium occidentale"
binomial_authority = L.|The cashew ("Anacardium occidentale"; "Anacardium curatellifolium" ) is a in the family . The is native to northeastern . Its English name derives from the Portuguese name for the fruit of the cashew tree, "caju", which in turn derives from the indigenous Tupi name, "acajú". It is now widely grown in tropical s for its cashew "nuts" (see below) and cashew apples.

It is a small tree growing to 10-12m (~32 ft) tall, with a short, often irregularly-shaped trunk. The leaves are spirally arranged, leathery textured, elliptic to obovate, 4 to 22 cm long and 2 to 15 cm broad, with a smooth margin. The s are produced in a or up to 26 cm long, each flower small, pale green at first then turning reddish, with five slender, acute petals 7 to 15 mm long.

What appears to be the of the cashew tree is an oval or pear-shaped or false fruit that develops from the receptacle of the cashew flower. Called the cashew apple, better known in Central America as "marañón", it ripens into a yellow and/or red structure about 5–11 cm long. It is edible, and has a strong "sweet" smell and a sweet taste. The pulp of the cashew apple is very juicy, but the skin is fragile, making it unsuitable for transport. It is often used as a flavor in .

The true fruit of the cashew tree is a kidney or boxing-glove shaped that grows at the end of the pseudofruit. Actually, the drupe develops first on the tree, and then the peduncle expands into the pseudofruit. Within the true fruit is a single , the cashew nut. Although a nut in the culinary sense, in the botanical sense the fruit of the cashew is a seed. The seed is surrounded by a double shell containing a dermatogenic phenolic resin, , a potent skin irritant also found in the related poison ivy. Some people are allergic to cashew nuts, but cashews are a less frequent than nuts or s.

Originally spread from Brazil by the Portuguese, the cashew tree is now cultivated in all regions with a sufficiently warm and humid climate. It is produced in around 32 countries of the world. The world production figures of cashew crop, published by the UN's Food and Agriculture Organization (FAO), was around 3.1 million tons per annum. The major raw cashew producing countries with their production figures in 2006 (as per the FAO) are (941,600 tons), (636,000 tons), called Kaju (573,000 tons), (236,140 tons) and (122,000 tons).

World’s total area under the cultivation of cashew is around 33,900 km². India ranks first in area utilized for cashew production, though its yields are relatively low. The world’s average yield is 817 pounds per acre (916 kg/hectare) of land

Collectively, Vietnam, Nigeria, India and Brazil account for more than 90% of all cashew kernel exports.

Anacardic acid is also used in the chemical industry for the production of , which is used for resins, coatings, and frictional materials.

The cashew is a popular snack, and its rich flavor means that it is often eaten on its own, lightly salted. Cashews are sold covered in chocolate, but due to their higher price compared to peanuts and almonds are not as common in candy, except from higher quality manufacturers. Cashews also factor in generally in whole form, and in often ground into sauces such as .The cashew can also be used in cheese alternatives for vegans, typically in homemade cheese recipes.

In Brazil, the cashew fruit juice is popular all across the country and is usually consumed with sugar.

* - the species "Anacardium excelsum"
* , also known as Wild Cashew, used medicinally.
* , (the Oriental Anacardium) is a native of India and is closely related to the cashew